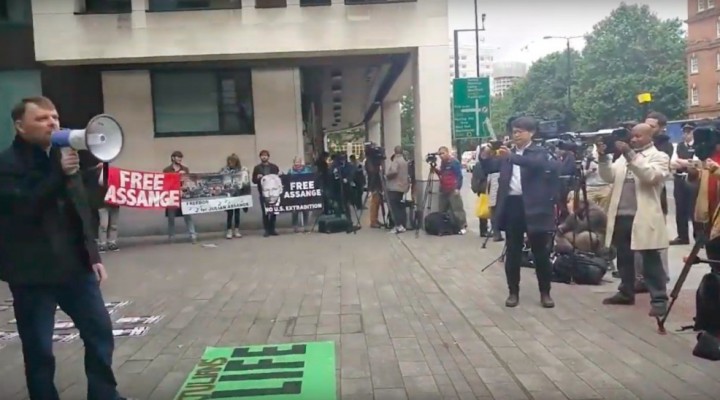 Julian Assange’s latest US extradition hearing was a brief affair which saw the WikiLeaks founder’s next hearing scheduled for sometime after the end of February, nearly at the end of his 50-week sentence for a bail conditions violation. According to Reuters Assange was lucid and spirited enough to argue with the prosecution a bit, telling the American lawyer via videolink, “I didn’t break any password whatsoever.”

So that’s somewhat encouraging. A short time earlier, on the other side of the Westminster Magistrates courthouse wall, a far more animated scene had just been live-streamed to the world.

During a lively pro-Assange demonstration outside, independent reporter and political commentator Gordon Dimmack took the bullhorn, pointed it at the press crew which had gathered awaiting news from the courthouse, and delivered a scathing rebuke to them which is about the most delightful and cathartic thing that an Assange supporter can possibly watch.

“Today’s the day that journalism gets put on trial,” Dimmack said. “And it’s interesting that behind me there are this many cameras. There haven’t been this many cameras for quite a while. It’s interesting that when Julian was dragged out and kidnapped from within that Ecuadorian embassy, all of you guys had actually gone home, and it was a Russian TV station that actually caught it, Ruptly. It’s almost as if you don’t care.”

“For seven years you have smeared and slandered that man who is going to appear on video in that court in about fifteen minutes,” Dimmack told the mainstream press, right to their fucking faces. “You are all responsible for what has happened today! All of you in the media! Every one of you. You have got blood on your hands. When he released those documents that Chelsea Manning gave him, all he did was the job of a publisher. That’s it. Right now Julian Assange is going to court and put on trial for exposing war criminals as war criminals. And all of you for seven years have smeared and slandered him. You should be ashamed of yourselves.”

“You have all got a chance right now to actually do a U-turn and repair some of the damage that you have done over the last seven years,” Dimmack roared. “The Fourth Estate is extremely important. You know this. This is why journalism is such a noble profession; you are meant to hold power accountable, not to suck up to it sycophantically and just repeat propaganda. Otherwise you are just the establishment’s PR firm.”

“Well guess what?” Dimmack concluded, gesturing to the courthouse. “He was right again! Free Julian Assange.”

“Mr Assange has absolutely no chance to get a fair judicial proceeding in any of these jurisdictions.”

204 people are talking about this

So, wow. That’s basically everything every Assange supporter has wanted to scream at every member of the mainstream press for years, and he said it right to their faces in exactly the way we’d want to say it.

Dimmack’s heartfelt rebuke comes from the same lucid recognition as UN Special Rapporteur on Torture Nils Melzer, who in a recent interview with The Canary explicitly called out the journalistic malpractice around Assange and the mass media’s complicity in his psychological torture.

“In today’s information age, the media have an extraordinary power to shape public opinion, and no one is exempt from their influence,” Melzer said. “The media are a veritable ‘fourth power’ in the state next to the traditional branches of government, controlling not only what is said and shown, but also what is not disseminated and, therefore, is withheld from the public. This enormous power comes with an equally enormous ethical responsibility. Many media outlets and individual journalists have shown a remarkable lack of critical independence and have contributed significantly to spreading abusive and deliberately distorted narratives about Mr Assange.”

“When the media find it more appropriate to spread humiliating jokes about Mr Assange’s cat, his skateboard and his faeces, than to challenge governments consistently refusing to hold their officials accountable for wars of aggression, corruption and serious international crimes, they demonstrate a deplorable lack of responsibility, decency and respect not only towards Mr Assange, but also towards their own readers, hearers and viewers, whom they are supposed to inform and empower. It is a bit like being served poisoned junk food at a restaurant – a betrayal of trust with potentially serious consequences,” Melzer added.

“By making Mr Assange ‘unlikeable’ and ridiculous in public opinion, an environment was created in which no one would feel empathy with him, very similar to the historic witch-hunts, or to modern situations of mobbing at the workplace or in school,” Melzer said.

The mass media have created and then egged on an atmosphere of what Melzer described to Chris Hedges as “unrestrained public mobbing” by repeating smears without skepticism and using their inflated social media profiles to go even further in their sneering, encouraging the public to join in. Aside from this ongoing psychological abuse on a massive international scale being extremely detrimental to Assange’s health, it also facilitated a fatal blow to press freedoms which is impacting journalists all around the world already. It was myopic, petty and very, very dangerous to their own goddamn profession, and we kept warning them but they kept doing it anyway.

To have Gordon step up and tell them that right to their gormless face-holes may not reverse the damage they’ve done, but at least they had to stand there and listen to it. And my God, was it good to hear out loud. More of this please!