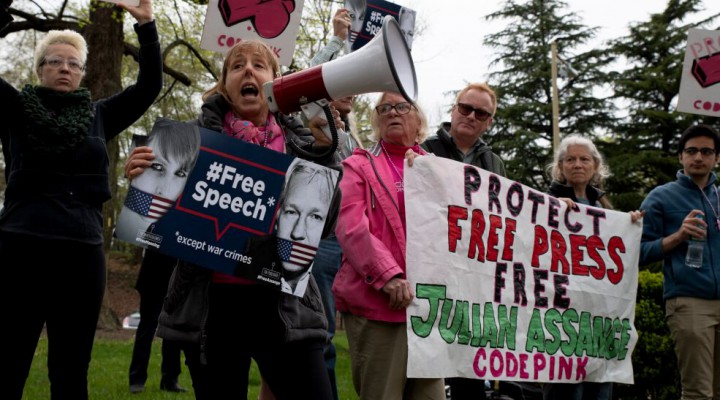 MPN- “It’s totally backwards and we’re calling for him to be freed. And I would like the people who got us into the wars to be the ones behind bars.” – Codepink co-founder Medea Benjamin

Demonstrators gathered on Thursday – just hours after the arrest of Wikileaks publisher Julian Assange by UK authorities – outside of the British Embassy in Washington D.C. to denounce the unprecedented affront to freedom of the press. Protesters also took the opportunity to highlight the injustice of the jailing of Chelsea Manning over her refusal to testify against Assange.

Chants of “#FreeJuliangeAssange and #ChelseaManning!” 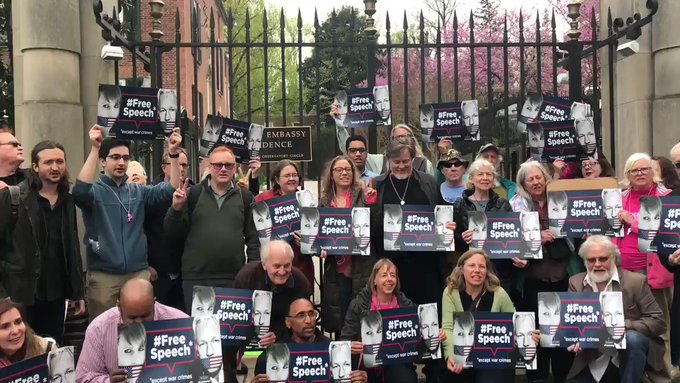 95 people are talking about this

Anti-war groups Codepink, ANSWER Coalition and Popular Resistance, in addition to a handful of unaffiliated activists and sympathetic reporters, took turns giving speeches in support of Assange and his publishing record. According to Popular Resistance, demonstrations were planned in a number of cities including New York City, San Francisco, Berlin, Atlanta, Boston, Chicago, Denver, Houston, Los Angeles, Miami and Seattle. MintPress News reported live from the rally in Washington. There, Codepink co-founder Medea Benjamin spoke to MintPress about Assange and the political context he has been arrested in as the rally was kicking off.

We’ve actually used the information that Wikileaks has divulged to the public in our work against war. The files about Afghanistan and Iraq [and] the files about Guantanamo were all essential for us as citizens that are trying to make our government be honest and responsible. And instead of the people who lied us into the wars in Iraq and were responsible for so many deaths and millions of people being displaced – instead, the one that they are putting in prison is the person who gave us the truth.

It’s totally backwards and we’re calling for him to be freed. And I would like the people who got us into the wars to be the ones behind bars.”

Benjamin’s full speech to the rally can be viewed here:

.@medeabenjamin talks about the history of @wikileaks publishing 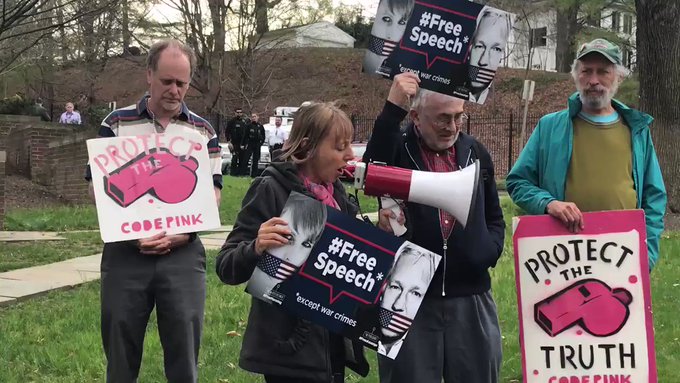 Medea Benjamin on the lack of truth in media. 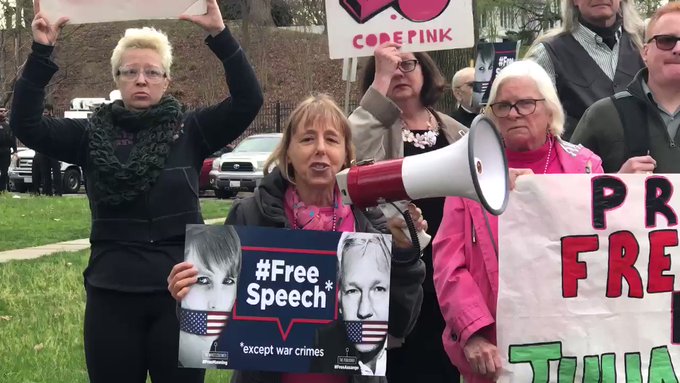 40 people are talking about this

This is nothing new: publishing leaked documents. Look at the Pentagon Papers: Washington Post did it, New York Times did it. This is nothing new. But Julian Assange invented a new way to do it with Wikileaks; a new, anonymous way. And it scares the hell out of the ruling elite, because it means that their efforts – their secretive efforts – to do what they do, to create wars around the world, to extract all of the wealth and all of the resources – it’s now open for the people to see.”

More than a dozen cars have driven by and honked their horns in support of the #FreeJulianAssange protest outside the UK Embassy. 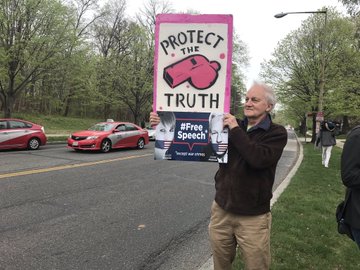 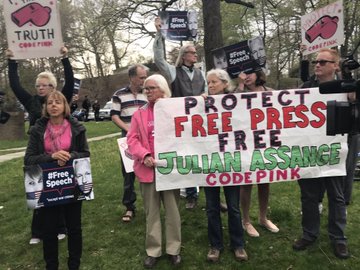 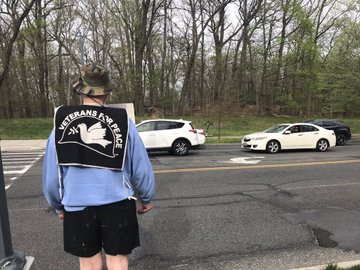 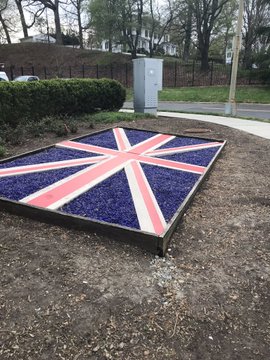 39 people are talking about this

Our friend @LeeCamp of @RedactedTonight passionately addresses the crowd gathered outside of the British Embassy in Washington DC, calling to #FreeJulian: 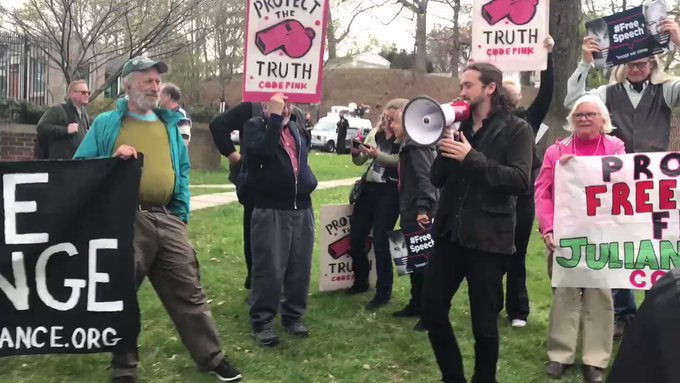 61 people are talking about this

Lawyer and co-director of Popular Resistance Kevin Zeese addressed the crowd, telling them:

I think this is the beginning of another phase of the defense of Julian Assange. Unfortunately, we knew this day was likely to come, but extradition [to the US] is not guaranteed. People can organize and mobilize, and they started to do that very quickly. This is not the only protest happening today, on this first day of this extradition challenge.

We recognize that Julian Assange is a truth teller. His case is the case that determines the future of journalism in the 21st century. It’s equivalent to the John Peter Zenger case. It’s a case that occurred before the United States [existed], in the colonial era, when a publisher published the truth about a corrupt British governor. He told the truth and was arrested. In those days, telling the truth was not a defense. In those days, there was no First Amendment. As a result of that case, truth is a defense, and there is a First Amendment.

As a result of Julian’s case, we’re gonna see a democratized media; a media that empowers the people, takes away power from the stranglehold of corporations – the half dozen corporations that control 90 percent of the news. Wikileaks has opened that up. They’ve allowed people who see crime to report crime.” 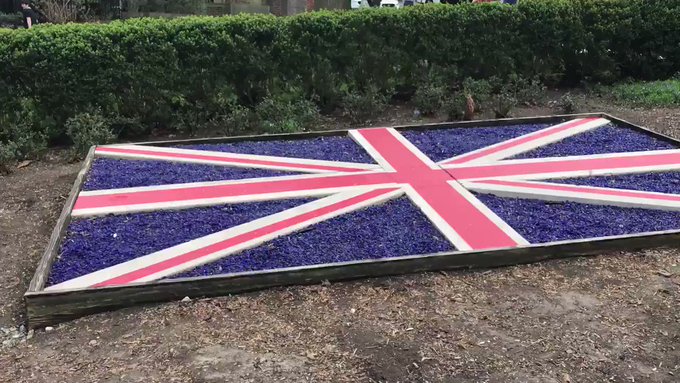 That’s what they’re afraid of. The truth is critical for a democracy to exist. If people don’t know what’s being done in our name, it’s not a real democracy.

Wikileaks has exposed so many breakthrough stories. They are the top journalist outlet for the truth, and that’s why they’re being prosecuted.” 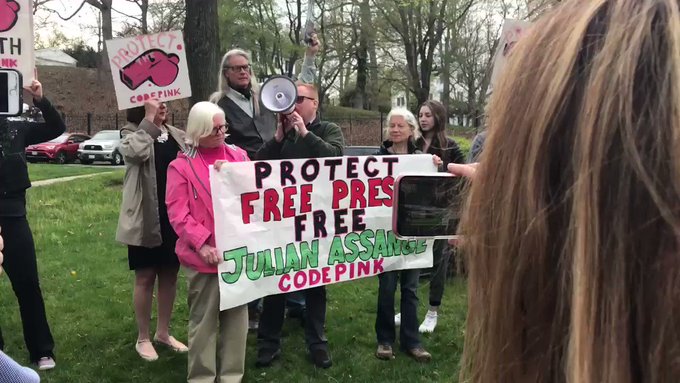 Following the rally, demonstrators marched down to the British Ambassador’s residence chanting “Telling the truth is not a crime: Free Julian Assange!” and “There’s only one decision: No extradition!”

Upon reaching the residence, Green Party activist and co-director of Popular Resistance, Margaret Flowers, delivered a message to the ambassador.

We are here because this morning, the Ecuadorian Embassy evicted Julian Assange, revoking his asylum, and the British government committed the crime of arresting and detaining him. We are concerned that the British government will extradite him to the United States, where he will recieve an unjust trial and likely, brutal treatment.

We are calling on the British government to stand with international law, to stand on the side of human rights, free Julian Assange, and provide him safe passage home.” 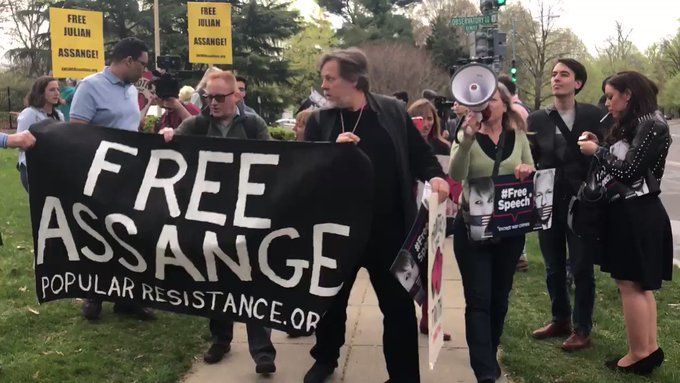 80 people are talking about this

The live streamed version of the entire rally can be viewed here, via News2Share.