HOME / SOCIAL/CULTURAL / BBC, Sky News Have Hidden Their Interviews With UN Expert On The Torture Of Assange 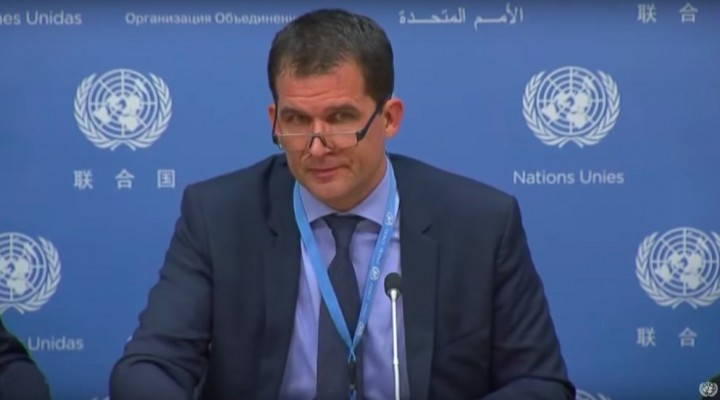 UN Special Rapporteur on torture Nils Melzer has said that on the 31st of May he gave video interviews with both Sky News and the BBC on his findings that WikiLeaks founder Julian Assange is the victim of psychological torture. As of this writing, footage of those interviews is nowhere to be found.

In response to a smear by virulent empire propagandist Idrees Ahmad about his conducting an interview with RT, Melzer tweeted that he has given interviews to both Sky News and BBC World, but that they seem not to have been aired.

“So the UN rapporteur actually appeared on the Kremlin’s premier propaganda network—yes, the propaganda network of the state that shoots journalists in the face—to discuss Julian Assange’s ‘torture’,” tweeted Ahmad, pretending to be under the illusion that UN experts are meant to remain exclusively loyal to a specific group of nations.

“For the record: On 31 May, I have also given similar exclusive TV interviews to both Sky News and BBC World on Julian Assange, but it seems they decided not to broadcast them,” Melzer responded.

For the record: On 31 May, I have also given similar exclusive TV interviews to both @SkyNews and @BBCWorld on #JulianAssange but it seems they decided not to broadcast them. https://twitter.com/im_PULSE/status/1134629784435220480 …

So the UN rapporteur actually appeared on the Kremlin’s premier propaganda network—yes, the propaganda network of the state that shoots journalists in the face—to discuss Julian Assange’s “torture”. https://twitter.com/NilsMelzer/status/1118495861116481539 …

1,393 people are talking about this

Indeed, there is as of this writing no video footage to be found anywhere of Melzer’s interviews with either of these outlets. If you search for online video footage of Nils Melzer conducting interviews on this subject, you’ll find videos from RT and Ruptly, you’ll find his excellent interview on Democracy Now which we discussed recently, but you won’t find videos from BBC World or Sky News, nor any record of any video interviews ever having been aired.

So appears that these interviews were never aired at all, or, if they were aired, have had any record of them hidden from easy online visibility. In any case, this is a big deal. The BBC published one print article that contains a few small excerpts from a discussion with Melzer, but in terms of impact and quantity of information this comes nowhere close to a televised interview and online video footage.

The idea that anyone from the UN should only be giving interviews to western media outlets is of course ridiculous, and it’s made even more ridiculous by the fact that Melzer has been wide open to speaking with any platform that’s willing to circulate his findings, including my own.

“I stand ready to respond to uncomfortable questions, but then media must also stand ready to publish uncomfortable truths,” Melzer told me via Twitter when asked about the missing footage. He said the interviews were conducted with BBC World and Sky News via Skype, and lasted about five minutes each.

We may be sure that “uncomfortable truths” were indeed what came out in Melzer’s interview. Watch any existing video interview that Melzer has done on this subject and you’ll see how much damning information he packs into each minute of footage. You may also get a pretty strong suspicion of why establishment narrative management firms like the BBC and Sky News may not have wanted to publicize that footage.

“So the BBC and Sky kept the UN’s expert on torture off air, and viewers were denied the chance to hear that, in his expert opinion, the UK state has subjected Julian Assange to torture. I’m struggling to understand how that decision could be justified by any normal news values,” said British journalist Jonathan Cook.

Pressure must be put on these outlets to explain why they didn’t air these exclusive interviews, and they must be forced to give a response. Yes, any response we might get will be mealy-mouthed, they’ll make some huffy noises about limited air time etcetera, but they need to know that people aren’t just watching what they are airing with skepticism, they’re watching what they’re ignoring. When it comes to propaganda, lies by omission are even more pernicious than outright lies because they are difficult to confront.

Don’t let them fool you, this story is big. In terms of newsworthiness, it meets all the criteria and then some. Nils Melzer is great “talent” as they say; he is well spoken and interesting, and he has hugely important things to say about a hugely important situation. There is no reason to bin these interviews other than backroom politics. Demand to know what went on behind closed doors.

Julian Assange has been tortured. His health has been declining dangerously. The US, UK, Sweden, Ecuador and Australia are responsible for this. They did this to him because he published inconvenient facts about the powerful. These are truths. They are uncomfortable truths, but they are truths we all must ingest, process, and respond to.

UPDATE: Melzer reports that Sky News may have aired his interview on television, though it remains hidden online.

For the record: On 31 May, I have also given similar exclusive TV interviews to both @SkyNews and @BBCWorld on #JulianAssange but it seems they decided not to broadcast them. https://twitter.com/im_PULSE/status/1134629784435220480 …

So the UN rapporteur actually appeared on the Kremlin’s premier propaganda network—yes, the propaganda network of the state that shoots journalists in the face—to discuss Julian Assange’s “torture”. https://twitter.com/NilsMelzer/status/1118495861116481539 …

Update: I have just been told by a viewer that my interview with @skynews was in fact aired, but it seems it has not been made available online. Any further info, also about @BBCWorld, more than welcome!

0 thoughts on “BBC, Sky News Have Hidden Their Interviews With UN Expert On The Torture Of Assange”