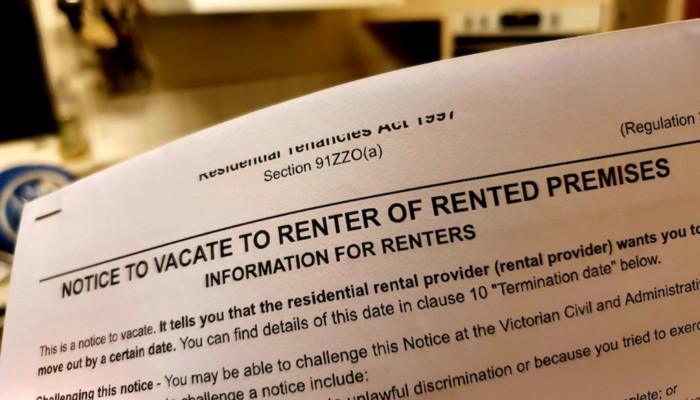 Well, it finally happened. We finally received our eviction notice on the crumbling rental we’ve been living in for the last twelve years.

We knew it was coming. The landlords told us years ago they’d be bulldozing the place to put in two new units, which according to the notice is exactly what’s going to happen after we move out on or before January 30th.

The house has been letting us know too; everything’s falling apart, the electricity cuts out all the time, the sun roof blew off the kitchen during a windstorm a couple weeks ago and the roof and chimney are falling to pieces. The deterioration of the building combined with our aforementioned bed bug infestation has made it feel lately as though we’re being driven from the land by a bunch of Old Testament plagues.

Still I’ve been having a lot of big feels about it. This is where my kids have spent most of their lives. Their heights are drawn on the door jamb in the kitchen. Losing this house is like losing a loved one. I’m also a bit nervous about where we’ll wind up; we can’t afford to buy a house and rent in Melbourne has skyrocketed over the last few years.

Mosty, though, I’m just annoyed at this stupid, backwards system which forces people to pay landlords for shelter from the elements if they’re not fortunate enough to be able to afford a home of their own. Rent is largely an extortionate double-dipping scam where renters pay landlords for the privilege of keeping vandals and vermin from destroying their investment property which they’ll generally make a handsome profit off of when they sell, and this practice is held in place by a system which depends on the permanent existence of an underclass who can’t afford to own land.

Capitalism is such a grossly inefficient means of distributing resources that there are currently around 69,000 homes sitting empty and unused in Melbourne while families like my own stress out over finding an affordable place to live. Prices are set at “what the market will bear” and investors are happy to sit and wait until a buyer comes along willing to meet it, because they’re in no rush since they already have roofs over their own heads. Property values are driven up by this artificial scarcity forcing those who can’t pay it to rent from landlords, who ratchet their own prices up to “what the market will bear” as well because they know people can’t afford to buy their own homes.

And it’s just such a silly, stupid way of organizing a civilization that we’ll all have to evolve beyond sometime soon. This insane competition-based model where everyone’s trying to squeeze every crumb out of everyone they can and stepping on one another’s heads to keep from drowning is ultimately driving our species toward disaster through ecological destruction and imperialist warmongering. If our species is to evolve into the future we’re going to have to move into a collaboration-based model of existence where we pour our creativity and ingenuity into finding ways for us all to thrive in cooperation with our ecosystem rather than into finding new ways to extort, exploit, abuse and kill one another. Into making sure everyone has enough rather than into funneling wealth from the poorest to the richest.

Everyone deserves a home on the planet they were born on. They deserve to feel invested in the health of the land they live on rather than like a stranger who is just passing through. Centuries of war, famine, forced migration, and the alienating effects of competition and capitalism have shaped us into a species that acts as though we are separate from the planet that sustains us. We act like a cancer rather than a native species of mammals. This essential mistake of our own perception of separation needs to be rectified if we are to evolve into a species that collaborates with country rather than lays waste to it. We are not separate from our home, and we need to start acting like it. We can start by making housing a right for all humans so that people will feel invested in the health of the land rather than the digits in their investment portfolios.

And perhaps then we will love our home the way she deserves to be loved.

Joelene Versus The Landlord