Meghan McCain Is A Fake 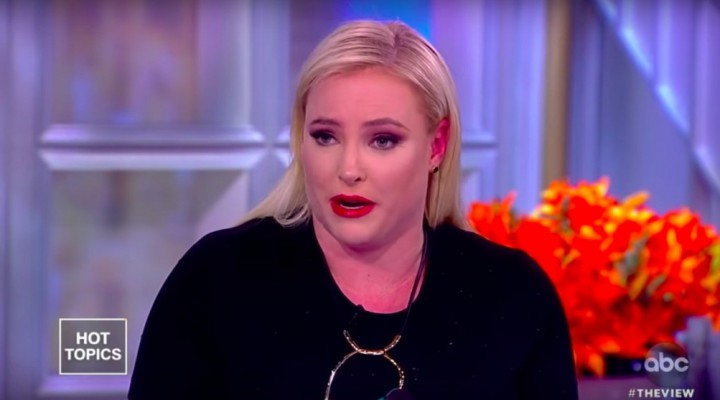 Some traditions say that having children is the same as attaining immortality. In the case of Meghan McCain, the apple certainly didn’t fall far from the warmongering psychopath.

The View is an American morning talk show in which current events are discussed by a panel of women with radically diverse political beliefs ranging from Democratic Party neoconservatism all the way to Republican Party neoconservatism. Within this microscopic Overton window of public discourse, the subject of the House debate over a resolution to denounce Ilhan Omar’s criticisms of America’s involvement with the Israeli government came up at the beginning of the show today.

And it made Meghan McCain cry.

Joy Behar introduced the topic, with her only criticism of the smear campaign against Omar being that Democrats are targeting their own instead of Trump. Abby Huntsman jumped in to say that it’s “shocking” and “a bad look” that the House can’t immediately pass a resolution targeting Omar, expressing sympathy for Nancy Pelosi for having to deal with “these more extreme voices in her party.”

From that point up until the commercial break, the show was about John McCain’s daughter.

“Um, this issue is a really intense one for me,” began McCain. She went on to bash Omar’s perfectly legitimate and truthful observations about the influence of the Israel lobby in US politics and the loyalty US politicians of all faiths display towards the Israeli government, premising all her arguments on the unquestioned assumption that those observations are intrinsically antisemitic “tropes” and “dog whistles” despite their not being targeted at Jews at all.

As we discussed recently, the accusations of antisemitism against Jeremy Corbyn are an entirely baseless smear which only emerged when the UK establishment found itself facing the very real prospect of having a government led by a populist leftist who believes in economic justice, ending wars, and supporting Palestinian rights. With Omar the same smear campaign is being used to marginalize an outspoken mainstream voice who is criticizing US foreign policy not just with regard to Israel, but with targets for US regime change interventionism like Venezuela as well. Contrary to the condescending claims of her liberal peers, Omar has been masterfully arguing her points without ever inadvertently advancing any actual antisemitic tropes; the accusations stem solely from willful distortions of the actual words she’s been saying.

Both of these claims are 100% unassailably true

2,274 people are talking about this

Behar and McCain dialogued a bit about why Omar focuses so much on Israel, and not for example the human rights violations in Iran, completely ignoring the obvious fact that Israel is a close ally that the US backs militarily and supports with tens of billions of dollars annually while Iran is a longtime US target for regime change.

Only one of the four panelists came anywhere close to defending Omar. Sunny Hostin pointed out that they’d just recently had on virulent Israel defender Bari Weiss, who assured them that it is indeed acceptable to talk about Israel’s policies without being labeled antisemitic.

Hostin went on to criticize Republicans for hypocrisy and using Omar’s comments as a “wedge issue”, with McCain trying to interrupt and growing visibly more distressed.

“Are you comfortable with me speaking now? Are we comfortable with me rebutting now?” Meghan asked above audience applause for Hostin’s comments. “So she also said that Israel has hypnotized the world, suggested that Jews in Israel have bought US politicians, ‘All about the Benjamins’, implied that American Jews have divided loyalties and it’s okay for people to push allegiance to a foreign country.”

This is all bullshit. Again, Omar has been navigating this terrain so skillfully that the only way to make her comments seem antisemitic is to willfully distort them. AIPAC, the lobby group Omar criticized, is an American lobby firm funded by people of all faiths including many fundamentalist Christians, and Omar never came remotely close to implying that “American Jews” have divided loyalties.

“I take this very personally,” McCain said, her lip beginning to tremble. “I would go so far as to say I probably verge on being a Zionist as well. But I will say that I don’t have family that is Jewish, but Joe Lieberman and Haddassah Lieberman are my family. And I take the hate crimes rising in this country very seriously, and I think what’s happening in Europe is getting really scary.”

McCain was not far off claiming Joe Lieberman as family, seeing as Lieberman and her father collaborated toward war agendas so famously that Salon once published an article titled “McCain, Lieberman and Graham: The Senate’s three war-crazed amigos“. So that’s about as close as you’ll get to an admission from McCain that this garment rending about Ilhan Omar has nothing to do with antisemitism and everything to do with support for hawkish US foreign policy. She made no mention in her tearful lament about antisemitism in Europe of the fact that her father actively colluded with neo-Nazis in the 2014 US-backed coup in Ukraine.

“I’m sorry if I’m getting emotional,” McCain said with her voice trembling but no visible tears. “But the idea that this is politicized, I’m really not–I was very nervous to talk about this on this show because I thought it would become politicized, and it really shouldn’t be. On both sides it should be called out. And just because I don’t technically have Jewish family that are blood-related to me doesn’t mean I don’t take this as seriously. And it is very dangerous, very dangerous. What Ilhan Omar is saying is very scary to me and is very scary a lot of people. And I don’t think you have to be Jewish to recognize that.”

So to recap, Meghan McCain is extremely emotional about things Ilhan Omar did not say, because her father and Joe Lieberman used to plan wars together. Furthermore, she doesn’t believe comments made explicitly and exclusively about political bodies and political dynamics should be politicized.

This all happens just a couple of weeks after Congresswoman Tulsi Gabbard’s appearance on The View, where McCain called Gabbard an “Assad apologist” to her face and accused her of “spouting propaganda from Syria.” And you just know Daddy McCain was so proud, looking up at her from his demonic torture rack.

You might be thinking it’s lucky that Meghan McCain has not followed her father into political life, but consider the fact that Joe Scarborough once turned down an easy shoe-in run for the US Senate because he decided that he could have more influence on public policy as a popular morning television host than he could as one of 100 senators. The crux of real power lies not in politics, but in narrative control, and Meghan McCain has placed herself squarely in a place of strong narrative influence.

Every time she opens up that crimson mouth to spout her father’s toxic ideas, they enter into the minds of voting Americans from coast to coast, and they have an impact. Expect to see McCain use every tool at her disposal, including crocodile tears, to continue advancing the violent interests of the US-centralized empire for as long as she’s on television.

0 thoughts on “Meghan McCain Is A Fake”