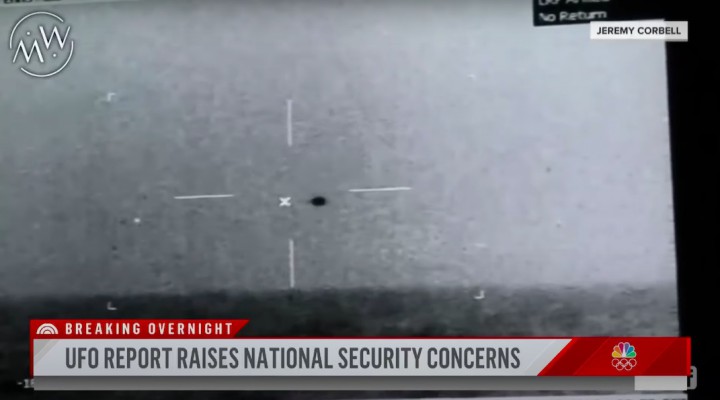 So in case you haven’t been keeping up it’s been pretty thoroughly confirmed that the US government’s highly anticipated UFO report due this month won’t contain any significant revelations and certainly won’t verify anyone’s ideas about these phenomena being extraterrestrial in origin, but it absolutely will contain fearmongering that UFOs could be evidence that the US has fallen dangerously behind Russian and Chinese technological development in the cold war arms race.

Unknown US officials have done a print media tour speaking to the press on condition of anonymity (of course), with first The New York Times reporting their statements about the contents of the UFO report and then CNN and The Washington Post. Each of these outlets reported the same thing: the US government doesn’t know what these things are but is very concerned they constitute evidence that Russia and/or China have somehow managed to technologically leapfrog US military development by light years. All three mention these two nations explicitly.

This narrative was then picked up by cable news, with MSNBC inviting former CIA director and defense secretary Leon Panetta on to explain to their audience that the US government should assume UFOs are Russian or Chinese in origin until that possibility has been exhausted.

“Is it your assumption that it is Russia or China testing some crazy technology that we somehow don’t have, or are we sort of over-assuming the abilities of China and Russia and that the only other explanation is that if it is not us ourselves then it is something otherworldly?” MSNBC’s Chuck Todd asked Panetta.

“I believe a lot of this stuff probably could be countries like Russia, like China, like others, who are using now drones, using the kind of sophisticated weaponry that could very well be involved in a lot of these sightings,” Panetta replied. “I think that’s the area to go to very frankly in order to identify what’s happening.”

“It sounds like you think we should exhaust that out, exhaust that hypothesis first before you start dealing with other hypotheses,” Todd said.

“Yeah, absolutely,” said Panetta, who for the record is every bit as much of a tyrannical, thuggish imperialist cold warrior as any other CIA director.

This UFOs-as-Chinese/Russian-threat narrative has quickly been picked up and thrust into mainstream orthodoxy by all the major branches of the mass media, from Fox News to Reuters to The Guardian to Today to the BBC to USA Today. Whenever you see the imperial media converge to this extent upon a single narrative, that’s the Official Narrative of the empire. We can expect to see a lot more of this going forward.

Interestingly, the only mass media segment I’ve seen on this topic since the New York Times story broke which doesn’t promote the UFOs-as-Chinese/Russian-threat narrative is a guest appearance on Tucker Carlson Tonight by Lue Elizondo, the military intelligence veteran who got the ball rolling on the new UFO narrative which emerged in 2017. Elizondo goes out of his way to tell Carlson (who himself has been promoting the idea that UFOs may be a foreign adversarial threat with cartoonish melodrama) that there’s no way these could be Russian or Chinese aircraft.

Elizondo, who seems to favor the UFOs-as-extraterrestrials narrative, argues that there are extensive records of military encounters with these phenomena stretching back seventy years, which rules out China since it could barely keep its head above water back then and rules out Russia because it shared its UFO knowledge with the US after the collapse of the Soviet Union.

I don’t know what’s going on with that last bit; I see no reason to trust that an American spook is acting in good faith on such an easily manipulated topic, but it is entirely possible that Elizondo set out on this road out of a sincere desire for government disclosure on UFOs and is now trying to regain control of the narrative now that he sees the cold war arms race direction it has taken.

Chris Melon, another major player in the new UFO narrative, recently complained on Twitter that “some important information was not shared” with the public in the UFO report. So who knows, maybe the initiators of this new UFO narrative were acting in good faith and their efforts were just swiftly hijacked by forces beyond their control to advance preexisting cold war agendas.

Clearest indication yet that the Imminent UAP report to Congress was neutered by access problems, this from @ChristopherKMe4: “Undoubtedly, some important information was not shared, potentially for a variety of reasons. Congress should inquire about that” https://t.co/9jmZRDFdsH

Regardless of whether or not that’s true, it was always inevitable that this strange new rabbit hole of UFOs going mainstream was going to lead to more cold war propaganda. I’ve been interacting a bit with the online UFO community for the first time ever, and it seems like they’re mostly decent people with good intentions and a lot of hope for this new governmental investigation. But it also seems like they’re largely a community which mostly just talks to itself and is only just beginning to meet the cold harsh light of day that is the impenetrable depravity of the US war machine.

If there are indeed extraterrestrials and they are indeed flying around our world in strange aircraft, we are more likely to get the truth about this from the extraterrestrials themselves than from the US military. The war machine only does killing and destruction; it’s not going to suddenly develop an interest in truth and transparency. The sooner UFO enthusiasts realize this the better.