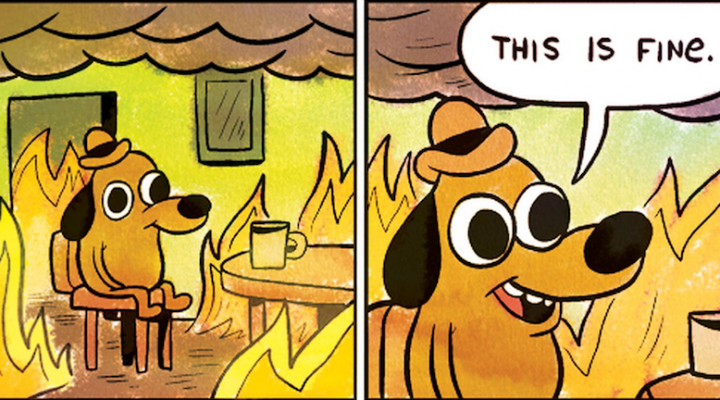 If people could see the world with fresh eyes, as though they were viewing it for the very first time, they would suddenly find themselves smashed between two equally strong yet wildly different experiences.

On the one hand, they would experience breathless awe at the thunderous beauty of everything that exists. We tend to develop a mental habit of taking things for granted just because we have a thought story about knowing what they are and having seen them before. The labeling, dividing mind says “Oh yeah, I know what that is, that’s a tree. I’ve seen a million of those, no big deal,” and we make a habit of overlooking it. This habit combines with our fixation on looping mental chatter to pull the interest and attention out of our experience of the world which would otherwise be experienced as a nonstop eruption of staggering beauty.

On the other hand, someone seeing the world with fresh eyes would at the same time experience howling rage at all the immense evils that the mass media manipulators have convinced us to accept as normal. All the oppression, exploitation, violence, domination, ecocide and corruption which we were born into would no longer be seen as unfortunate but necessary mundane realities, and neither would all the horrible propagandists who deceived us into thinking they were.

Even the most informed and skeptical-minded people who are well aware that there is a nonstop psywar being waged by the powerful against human decency and common sense tend to think of establishment propaganda in terms that fail to encapsulate its most pernicious aspects. Most hip, conspiracy-aware individuals, when asked to point to examples of mass media propaganda, will talk about things like discrepancies in coverage which benefit western power structures, or the deliberate undermining of all political candidates even a tiny bit outside the mainstream consensus, or the lies that have been used to manufacture consent for wars.

By “manufacturing normality” I mean the way the plutocrat-owned political/media class pour massive amounts of energy day in and day out into making the ridiculous, horrific status quo seem normal. They do this in many ways, both by action and by inaction. The way a celebrity saying something obnoxious on Twitter is treated as immensely newsworthy while daily US drone strikes overseas go completely unreported. The way people starving and dying of exposure both in the third world and in the first while resources are vacuumed up by an elite few is something we’re all kept just dimly aware of while Johnny Popsong wearing a meat tuxedo to the Snobbies occupies headlines for days. The way mainstream TV shows, movies and music are all just really long commercials for capitalism and egocentrism.

This is hard to talk about, precisely because it has been so normalized. It’s easy to point out the glitches in the matrix that stand out against the background of normality like when CNN interviews a seven year-old girlto tell us all how important it is to invade Syria or whatever; it’s much more difficult to talk about the background of normality itself.

Lately I’ve been using the establishment freakout over Tulsi Gabbard’s presidential candidacy to address this difficulty, since on paper most of the things she’s saying appear fairly normal and common sense to anyone who hasn’t been trained to regard them as abnormal and freakish. We were gifted with a really useful insight into the way establishment narrative managers manufacture normality when The New York Times’ Bari Weiss dismissed Gabbard as “monstrous” on The Joe Rogan Experience and then found herself completely unable to articulate why she’d said that. Her floundering attempts to defend her position when questioned were essentially that of a propagandist saying what could be summed up as, “I can’t remember why, but everyone who matters has already agreed that she’s horrible and abnormal so that’s my take, too.”

And this is why the propaganda machine’s ability to manufacture normality is so powerful: by controlling what we all see as normal, they are able to spin any attempt to deviate from that false image of normality as abnormal. Humans are conditioned to see safety in normality; if patterns are constant and sustained we feel like we can relax, if patterns are disrupted we feel under threat. For this reason even something so clearly evil and deranged as the US forever war can be spun as normal and therefore safe, and any attempt to end it can be spun as abnormal and therefore unsafe.

It would never naturally occur to anyone that meeting with Syrian president Bashar al-Assad at the beginning of 2017 was some kind of horrible, career-defining evil; they had to be trained to think that. US politicians meet with shady world leaders all the time, and even someone who believes everything the TV says about Assad would normally see Gabbard’s meeting with him in the same light. The abnormality needed to be manufactured, and this was done by repeating over and over and over again to mass media consumers that Gabbard’s meeting was a shocking, offensive thing that must be defended in every single media appearance. Repeat this often enough and you get the illusory truth effect, a cognitive bias which causes people to assume that something they’ve heard a bunch of times is true. This is the cognitive bias which caused Bari Weiss to reflexively spit out the word “monstrous” when Gabbard’s name came up, despite not actually knowing anything about the basis for that accusation.

We’re dealing with this exact kind of dynamic all day, every day. The narrative managers say all day every day in myriad ways that the status quo of endless war, exploitation, oppression, ecocide and propagandistic mass mind control are all perfectly normal, and that the normal human impulse to pull away from that status quo is weird and dangerous. As I said, this dynamic is very difficult to talk about due to its very nature, but talking about it is a skill I intend to get better at. I encourage you to join me in that endeavor.