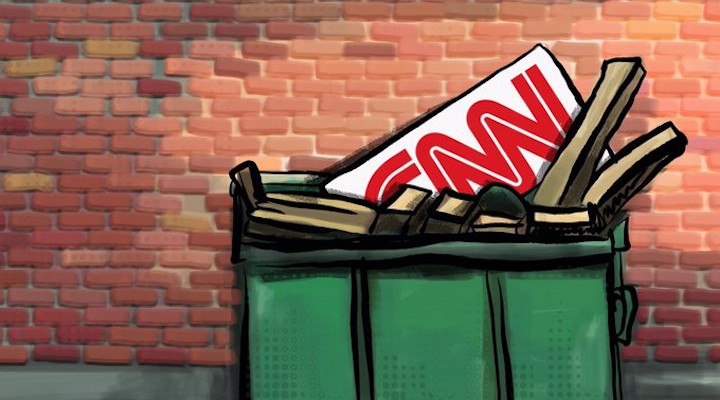 The hashtag #CNNIsTrash is the number one trend on Twitter as of this writing due to the network’s appalling treatment of Bernie Sanders in last night’s Democratic presidential debate in Iowa.

The joint smear job against Sanders had many arms, including wildly biased questions like Wolf Blitzer deliberately associating Bernie with “Iran’s Ayatollah Khamenei” by pointing out that they both want US troops out of the Middle East and demanding to know how he was going to avoid “bankrupting the country” with a healthcare plan used in nations all over the world.

But by far the most glaringly egregious assault on the Vermont Senator’s image was when CNN moderator Abby Phillip took a completely evidence-free sexism smear which defies all logic and presented it to the debate audience as an established and undeniable fact. You can watch the exchange here:

Phillip brought up a transparently ridiculous claim that was “leaked” to the press and confirmed by Warren that in 2018 Sanders had told Warren he did not believe that a woman could win a presidential election. It’s a completely unproven allegation about an unwitnessed private conversation, yet Phillip did not ask Sanders if he had said such a thing, she asked him why he said it, presenting it as a given fact.

Sanders explicitly denied ever saying any such thing. He said there’s Youtube footage people can look up of him saying a woman could become president many decades ago, adding that he only ran for president in 2016 because Warren refused grassroots efforts to persuade her to run (efforts which he’d supported).

“So Senator Sanders, I do want to be clear here, you’re saying that you never told Senator Warren that a woman could not win the election?” asked Phillip.

“That is correct,” Sanders replied.

“Senator Warren,” Phillip then asked without missing a beat. “What did you think when Senator Sanders told you that a woman could not win the election?”

It was such a brazen manipulation that even CNN’s heavily pro-establishment crowd audibly reacted. Warren then cooperated with this manipulation by responding as though the allegation was a proven fact, without acknowledging Sanders’ denial or defending her claim.

In CNN’s post-debate analysis, pundits actively reinforced the completely fact-free narrative that this allegation was an established reality, with Van Jones referring to “a banana peel sitting out there for Bernie to slip on when it came to his comments about women,” an idea premised on the position that those comments are known to have actually happened.

CNN’s Jess McIntosh took it even further, overtly dismissing Sanders’ denial and saying, “I think what Bernie forgot was that this isn’t a he said/she said story. This is a reported out story that CNN was part of breaking, so to have him just flat out say no I think wasn’t nearly enough to address that for the women watching.”

“I think what Bernie forgot is that this *isn’t* a he said she said story, this is a reported out story that CNN was part of breaking…”

Of course, the allegation absolutely is a he said/she said story, per any possible definition: Warren says it happened, Sanders said it didn’t. The fact that CNN “reported out” on that he said/she said story doesn’t magically turn it into a fact, as should be obvious to any grown adult who isn’t suffering from a severe head wound.

More importantly, nobody actually believes that Bernie Sanders told Elizabeth Warren a woman cannot be president. Not Jess McIntosh, not Abby Phillip, not Van Jones, not Elizabeth Warren, not CNN, and not any of the establishment loyalists who are trumpeting this allegation as fact. Anyone who claims to believe that this interaction occurred is simply lying to advance a political agenda, and they know it.

The belief that a woman cannot be elected president in 2020 is not a thing. Nobody believes that, and anyone who pretends to believe that anyone believes that is simply telling you that they are an unprincipled liar who would rather take a nonsense stand on a nonsense issue than promote actual policies and changes. The heavy favorite to win the 2016 election was a woman, and were she not literally in the middle of an FBI investigation during that election she would have overcome the narrow margins she lost by.

It’s been years since anyone has believed that a woman cannot win a US presidential election. If you claim that the one person in the world who does believe this is a senator who’s spent decades advocating for feminism and women in politics, you are a liar. It absolutely is that simple.

So angry Berners have been rightly decrying the despicable manipulations of CNN, which can only be a good thing. A massively influential news corporation owned by the largest telecommunications company on the planet should not be able to determine who voters select to the highest elected office in the most powerful country in the world.

This is oligarchic election interference, plain and simple. If the US government is going to call a few thousand dollars in Russian facebook memes election meddling, then the billions which get poured into the billionaire media tilting the scale to advantage the billionaire class is far worse by orders of magnitude.

Last May I wrote an article titled “The Worst 2020 Election Interference Will Be Perfectly Legal” saying that the most egregious forms of election meddling we’ll see in this presidential race will not be perpetrated by the Russians, nor by the DNC, nor by sleazy gerrymandering or voter ID requirements, nor by hard vote tally manipulation, but the everyday, in-your-face manipulations of corporate media outlets like CNN. Unsurprisingly, this is already proving undeniably true.

What you just saw tonight IS rigging an election. But go on, CNN, Nancy Pelosi, and corporate dems, do keep telling us how Russia is the real boogie man trying to destroy our democracy. #CNNisTrash

In fact the power of these vast news media corporations to manipulate the way the populace thinks and votes stretches far beyond the consequences of a mere presidential election. The ability to manufacture consent for the agendas of the plutocratic class which controls these corporations enables war, ecocide, militarism, soul-crushing oligarchic neoliberalism, increasingly Orwellian surveillance programs and an increasingly militarized police force to destroy lives and this very world without it ever occurring to a critical majority that it would be possible for us to use the power of our numbers to force real changes to our advantage.

It is good that people are loudly criticizing this dynamic. It’s important to keep drawing attention to the way we’re being manipulated out of having any control over not just what happens in our world, but over what we think about what happens in our world. Hopefully public trust in the mouthpieces of oligarchy can be weakened to such an extent that people stop buying into their deceptions.