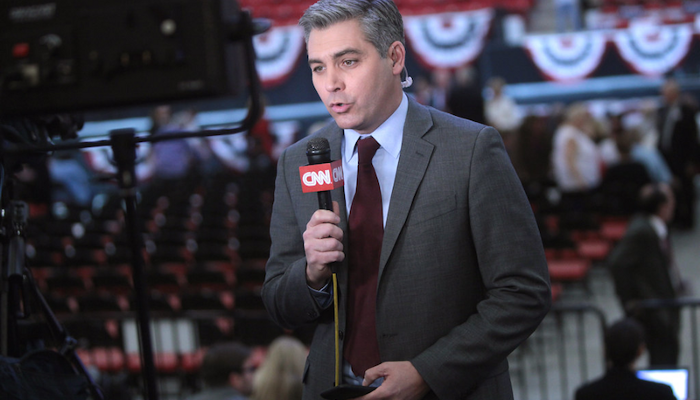 In the endless brain fart cyclone that is the Trump era, CNN White House Correspondent Jim Acosta has made a name for himself posing as a martyr of the free press. While US mass media have made a theatrical WWE performance of Trump’s occasional mean words toward Acosta under the banner of defending press freedoms, it has been pathetically sympathetic to this administration’s attempt to actually prosecute an actual journalist, Julian Assange, under the Espionage Act.

It is about time, then, that someone highlighted the irony and hypocrisy of this ridiculous melodrama by confronting Acosta on these contradictions directly. Thanks to independent video journalist Matt Orfalea, we now have footage of one such necessary confrontation taking place.

At a publicity interview for Acosta’s new book (titled “The Enemy of the People: A Dangerous Time to Tell the Truth in America” in the author’s trademark self-righteous and histrionic fashion), Orfalea asked Acosta what he thought about the Trump administration’s charging Assange under the Espionage Act.

Acosta word-saladed for a while, mentioned apropos of nothing that Orfalea is probably a WikiLeaks supporter, and then, as you could probably predict, began babbling about Russia.

“My understanding about the Julian Assange situation is that you know he is being charged not just for trying to speak truth to power and trying to reveal things,” Acosta said. “He’s in trouble for other things. And you know what we’ve seen during the 2016 campaign where there were contacts between WikiLeaks and Russian operatives. That I think takes Wikileaks and Julian Assange into sort of a different category than is a straight news organization — straight publisher of news around the world.”

As you probably already know, and as Jim Acosta most certainly knows, Julian Assange is not charged with anything related to the entirely unproven Russia allegations about his publications in 2016. The mountain of charges which have been heaped against him, most of which involve the Espionage Act and all of which seek to criminalize standard journalistic practices, all pertain to his 2010 publications of the Chelsea Manning leaks. Nothing whatsoever to do with Russia or 2016.

“I do understand what Julian Assange and WikiLeaks — what the spirit of what they’re trying to do — but I can’t sit here and endorse everything that they’ve done and the tactics that they used to go about presenting the information that they gather to the world,” Acosta concluded after a vapid gibberish fountain which contained nothing of substance apart from a tacit endorsement of the Trump administration’s prosecution of a journalist under the Espionage Act.

Acosta’s non-answer was a power-serving, question-avoiding obfuscation that would make Donald Trump blush, and his false claim that Assange’s imprisonment and pending extradition has anything whatsoever to do with Russia constitutes a defense of Assange’s treatment at the hands of the Trump administration. In a single four-minute interaction, Acosta (A) invalidated his posture as a defender of the free press, (B) invalidated his posture as oppositional toward Trump, and (C) illustrated everything that is unwholesome about western mass media.

“[Assange] is not currently charged with anything related to the 2016 election, but that did not stop Acosta from trying to make a case for why he wants to see him punished for the 2010 release as payback for the completely unrelated publication of the Democratic National Committee emails,” journalist Cassandra Fairbanks wrote of the exchange.

“In the Trump era, Acosta has made huge sums by reinventing himself as an anti-Trump maverick reporter,” tweeted journalist Dan Cohen regarding the interaction. “But when challenged by [Orfalea], he refused to condemn the Trump administration’s most flagrant attack of press freedom. A pathetic, obsequious display.”

Indeed, the precedent which would be set by the US government prosecuting a foreign journalist for publishing newsworthy facts about US war crimes is the single greatest threat to press freedoms in modern times, bar none. But the man whom the ruling establishment has anointed as Mister Press Freedom Himself has nothing but sympathetic things to say about it.

These comments from one of CNN’s most prominent figures come to light days after CNN published an astonishingly deceitful smear piece on Assange packed to the gills with demonstrable lies. This is the same CNN that told its viewers that it’s against the law to read WikiLeaks, with Democratic Party prince Chris Cuomo lying “Remember, it’s illegal to possess these stolen documents; it’s different for the media, so everything you learn about this you’re learning from us.” The same CNN that falsely reported that Assange is a pedophile not once, but twice. The same CNN that has been caught blatantly lying in its Russiagate coverage, which has had to fire journalistsfor misreporting Russiagate in a media environment where that almost never happens with Russia stories, which has deleted evidence of its journalistic malpractice regarding Russiagate from the internet without retraction or apology.