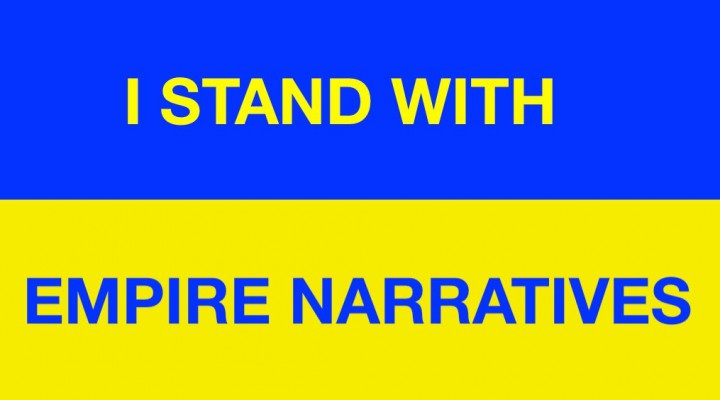 The only real anti-war position on the Ukraine conflict is support for de-escalation, diplomacy, and detente. Yelling “PUTIN BAD” and calling for escalations that could lead to a very fast, very radioactive WWIII are not anti-war, and indeed such sentiments are being exploited to prolong this war.

No efforts are being made toward diplomacy and peace, only toward escalations like building an insurgency and unprecedented economic warfare which fit perfectly into pre-existing US agendas against Russia. This is in the exact opposite direction of peace.

De-escalation is a skill we’re meant to start learning in kindergarten. These people act like they learned their de-escalation skills in the Minneapolis Police Department.

If you want to keep screaming that Putin is Adolf Hitler and even insignificant concessions like promising not to add Ukraine to NATO would be Chamberlainesque “appeasement” then go ahead, but don’t pretend you’re anti-war or pro-peace, because you’re not.

Wars end in one of two ways: with diplomacy and negotiation, or with mountains of corpses. If you’re opposed to any kind of negotiation with Moscow to bring about peace, then you want the latter. And if you do, you should get your bitch ass on a plane and join the front lines.

overwhelming feeling from reading about foreign volunteers in Ukraine: western countries don't have soldiers so much as they have colonial policemen who can call in airstrikes. even ex special forces are deserting en masse after their first contact with enemy helicopters and jets

Ukraine is still accepting foreign volunteer recruits. Go on all you brave blue-and-yellow keyboard warriors who scream at anyone who calls for negotiations with Russia to end this war. Put your life where your tweets are.

Condemning Putin is the easiest, safest, most redundant, least courageous thing that anyone in the western world can do right now. What’s a lot harder at the current moment is taking a bold stand against the west’s depraved role in getting this war started and in keeping it going.

Demands that you precede every criticism of the west’s role in this war with an enthusiastic condemnation of Putin are just vapid tone policing to silence your very valid criticisms. Nobody truly believes there’s not enough condemnation of Putin in our current media environment. They just want you to shut up.

I’d like to see a poll asking Ukrainian mothers the question, “Would you sacrifice your son for the remote possibility of future NATO/EU membership and control over Crimea and the Donbas?”

Because those have been the conditions for ending this war for over a week.

This conflict began in 2014 when the US backed a coup to oust Ukraine’s government. Experts have been warning this was coming ever since:

It gives me no pleasure but I’m confident western powers won’t start World War 3 with a Ukraine no-fly zone because western rulers don’t give a fuck about Ukrainians. They’d much rather watch every single Ukrainian die a horrible death than risk their own deaths via nuclear armageddon.

The main danger of the calls for a no-fly zone is not that they’ll be listened to, it’s that they push the Overton window of acceptable debate much further toward warmongering extremism, so supporting extreme things like mass-scale economic warfare becomes the moderate position.

So nuclear war over a no-fly zone seems unlikely. There’s still no reason to believe these idiots won’t get us all nuked some other way amid all this brinkmanship, but they’ve got enough brains and self-preservation instinct to avoid deliberately attacking the Russian military.

(NATO powers saying a chemical weapons attack may get NATO involved in this war) + (Ukraine has been pleading for direct NATO involvement since it’s their only chance of winning this war) = Strong incentive for Ukrainians to stage a chemical attack and frame the Russians for it.

#Poland's President Andrzej Duda said in an interview on Sunday that the use of chemical weapons in #Ukraine by Russia would mean #NATO should have to think seriously about how to respond.https://t.co/ZySl56X2FB

It’s very unpleasant to be subjected to the 24/7 deluge of unbelievable vitriol and McCarthyism that speaking out against the west’s role in this war gets you these days. I understand why more people don’t do it.

I’m not complaining; I know it comes with the territory. I’m just saying I understand.

Those who love peace and have enough inner clarity to see through the propaganda tend not to be thick-skinned keyboard warriors. We’re sensitive people with gooshy hearts, and it doesn’t take much to shut a lot of us down. I’d be the same if I didn’t have my healing practices. I’m sure there are many others who haven’t been able handle it.

0 thoughts on “Big Brave Keyboard Warriors: Notes From The Edge Of The Narrative Matrix”