HOME / WORLD / Every US Enemy Is Hitler: Notes From The Edge Of The Narrative Matrix 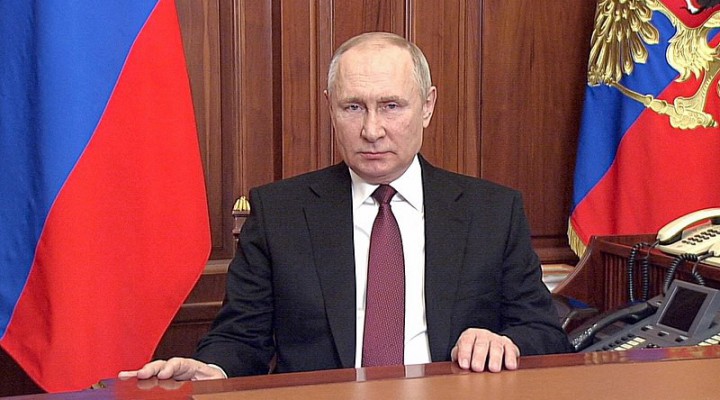 It’s just incredible how even after all this time, after all those wars, after all those lies, it’s not even occurring to most mainstream westerners to investigate whether the US could possibly have had anything to do with starting the war in Ukraine.

There’s one asshole in the room who always starts shit. Any time any shit has started he’s always been involved. And hardly anyone’s even looking at him thinking, “I wonder if that shit-starting guy has anything to do with this?”

I am convinced that mainstream culture’s fascination with World War II has made us all dumber. Everyone just lives in this dopey children’s cartoon now where every US enemy is Hitler and they’re the brave hero who is fighting Hitler.

Ukraine has no chance of winning this war alone, no matter how many weapons are sent to it. All weapons can do is make the war more costly for Russia, which it’s in the US empire’s interests to do. Stop pretending your calls for more weapons are anything more noble than that.

You’re not trying to save lives; only the negotiation of a ceasefire can do that. All you’re doing with your calls to arm Ukraine is helping the most powerful empire that has ever existed make this war more expensive for Moscow and hurt Putin’s popularity at home and abroad.

This was the USA’s strategy in arming the mujahideen in Afghanistan during the first cold war; to give the Soviets their own Vietnam. A costly quagmire that consumed their wealth and military focus for years, contributing to their downfall. They’ve already re-employed this strategy in Syria, where a US official openly admitted they worked to create a “quagmire” for Moscow:

Here is the May 2020 comment of the now former US envoy James Jeffrey that I referenced, in which he described his job in Syria as follows: "My job is to make it a quagmire for the Russians." pic.twitter.com/m50XwG7fCF

Now they’re hoping to pull off the same trick again, to any extent possible. That’s all this is. It’s not about saving lives or stopping a war, it’s about grand chessboard maneuverings to maintain US planetary domination.

Ukraine will be Putin's Afghanistan.

"Remember, the Russians invaded Afghanistan back in 1980," Hillary Clinton says. "It didn't end well for the Russians…but the fact is, that a very motivated, and then funded, and armed insurgency basically drove the Russians out of Afghanistan." pic.twitter.com/iirtXI4vz4

If you still want to support arming Ukraine on the basis that it will benefit the unipolar hegemony of a globe-spanning empire because you believe that empire’s continued dominance is a good thing, be my guest. But again, don’t pretend what you’re cheering for is anything nobler than that.

After 9/11 we were intensively bombarded with messaging about a sinister foreign leader, creating an environment of shrill hysteria that was very hard to stand up against. This was used to whip up support for pre-existing objectives of US geostrategic dominance.

If these insane escalations between the US and Russia don’t scare the shit out of you it’s either because you don’t understand them or because you are psychologically compartmentalizing away from what you do understand. It’s one or the other.

People said nobody was pushing for war with Russia, yet this faults Biden for not holding out the possibility of U.S. close air support: https://t.co/9JEMZWLgZY

Many influential pundits and politicians are now calling for a NATO no-fly zone in Ukraine, which would require directly attacking the Russian air force and Russian air defenses.

Scoop: Ukraine's President Volodymyr Zelensky is urging President Biden and NATO to impose a "no-fly zone" over "significant parts" of the country, telling Axios in a statement that Ukraine "can beat the aggressor" if the Western allies "do their part." https://t.co/o9VscRjFwp

We’re speeding toward a cliff and nobody in charge has a foot anywhere near the brake pedal. If anything, the political/media class is demanding the gas pedal be pushed to the floor.

Strangest thing – entire world watching a massive Russian armor formation plow towards Kyiv, we cheer on Ukraine, but we’re holding ourselves back. NATO Air Force could end this in 48 hrs. Understand handwringing about what Putin would do, but we can see what’s coming

Is what the US and its allies are trying to accomplish in Ukraine worth continually risking nuclear armageddon for? This is the single most important question in the world right now, and hardly anyone seems to be asking it.

If people want to oppose a no-fly zone, fine. But understand that is an act of appeasement no different to our appeasement of Hitler in 1938. We are refusing to do what we know is morally right out of fear. We are prepared to let a free nation die to safeguard ourselves.

Our rulers are rolling the dice on the life of every terrestrial organism, and people are still babbling about whether Democrats or Republicans are harder on Russia and trying to score political points. Hardly anyone has their head up and their eyes fixed on what may be coming.

Perhaps the biggest risk-calculation/moral dilemma of the war so far. A massive Russian convoy is abt 30 miles from Kyiv. The US/NATO could likely destroy it. But that would be direct involvement against Russia and risk, everything. Does the West watch in silence as it rolls?

If you heard something, looked outside, and saw a mushroom cloud growing in the distance, how much thought do you imagine you’d be having about the importance of NATO’s open-door policy with Ukraine?

Everyone’s freaking out about RT when all they’d have to do to kill it is simply allow leftist and antiwar opinions on western mass media. You’d steal their entire audience. But we all know that’s never going to happen because it was never actually about Russian state media; it’s about silencing opponents of the official imperial narrative.

Saying that hawkish escalations spearheaded by the most powerful empire in history led to undesirable consequences in Ukraine is not actually the same as an abuser saying “look what you made me do” and does not have “what-was-she-wearing energy.”

This criticism shows up in my online notifications literally every single time I talk about the role of the US empire in paving the way to the Ukraine invasion, and to be clear, the battered spouse and rape victim in their analogy is not Ukraine but the US empire. The poor widdle US empire. They’re literally demanding that no one on the internet criticize the most dangerous actions of the most powerful and destructive government on the face of this planet. At all. It’s just unbelievable that they think this is a normal and acceptable thing to do.

It’s simply forbidden to talk about the role the world’s largest power structure had in this conflict. You’re only allowed to say it’s happening solely because Putin is evil and hates freedom.

“You can criticize the US empire AND Russia, Caitlin.”

One of those is already being criticized at fever pitch by literally all government and mainstream media institutions in the entire western world, while the other is almost never criticized by those institutions in any meaningful way.

I saw someone in the comments of a post about nuclear war say “it would be Putin’s fault” if one happens. Like that would be any consolation to anyone on earth when the bombs go off. People still think about this thing in terms of political point-scoring, that’s how fucked we are.

Deteriorating material conditions can cause people to rise up against their government. Imperialists understand this, which is why they work to foment unrest with starvation sanctions in empire-targeted nations while at home keeping people fed just enough to prevent an uprising.

0 thoughts on “Every US Enemy Is Hitler: Notes From The Edge Of The Narrative Matrix”