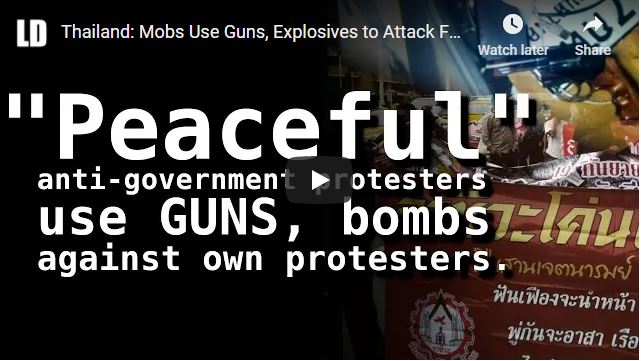 The suspects and victims were from opposing vocational schools notorious for their violent rivalries.

Bangkok Post in its article, “Rival students blamed for shooting near protest rally site,” would report:

The shooting heard after the protest at SCB Park ended on Wednesday night involved students from rival vocational schools who worked as guards during the rally, according to police.

This conclusion drawn by Thai police is based on CCTV footage, eye-witness accounts, admissions by the guards themselves on their official social media accounts, and video circulating online of protest guards conspiring to cover up the incident because of the obvious damage it will do to the protest’s already crumbling public image.

Violence and vandalism have been key features of the ongoing anti-government protests – features actively covered up by the Western corporate media, local opposition media, and Western-funded fronts posing as “human rights” groups like Human Rights Watch and Amnesty International.

Collectively these interests have attempted to cover up or spin this most recent incident of violence. The BBC’s Jonathan Head accused police of “pre-judging” the incident despite the overwhelming evidence and even admissions that led to the conclusion. 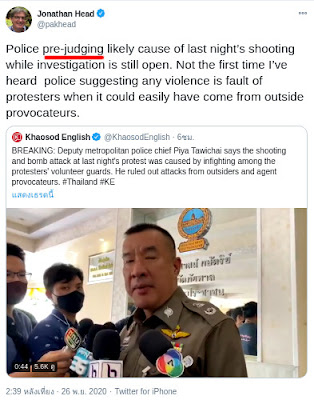 Those like Jonathan Head of British state-funded media outlets like the BBC should – as journalists – be helping warn the public of just how dangerous these protests are – yet instead they are attempting to cover up this danger and the violence they are carrying out – ensuring that it leads  to additional violence, injury, and possibly even deaths.

But as the frequency and scale of the violence grows and as public awareness grows with it, it has become an uphill battle for the opposition and their Western backers including across the Western media to continue covering it up.

Previous violence carried out by protesters against police and building targeted by protest organizers has been either ignored or spun by the media.

Accounts on social media attempting to raise awareness and warn the public of this violence have been systematically targeted and removed by US-based social media networks used by most of Thailand’s netizens.

For Thais interested in defending their country from further division, destruction, and violence – avoiding the use of violence while working to expose the violence  Western media, foreign-funded fronts, and the opposition here in Thailand are attempting to cover up, will be key.