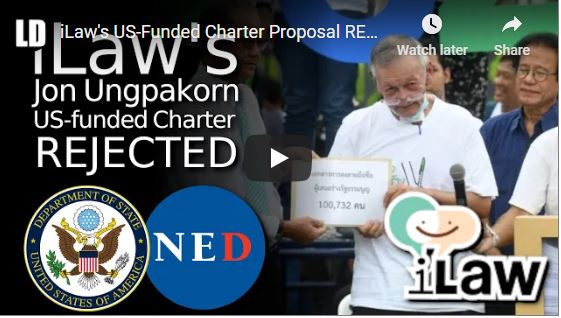 Funded by the US government via the notorious National Endowment for Democracy (NED) – iLaw set about petitioning the Thai government to have the nation’s entire constitution rewritten and rewritten in such a way as to make it easier for US-backed opposition parties to get into power.

The Thai parliament flatly rejected the proposal in part because of growing public awareness of iLaw’s foreign funding and the massive conflict of interest this represents – not to mention the assault on Thailand’s political independence it constitutes.

Hopefully this is the first step toward Thailand reviewing its NGO laws and finally prohibiting foreign-funded fronts from interfering in Thailand’s internal political affairs – something the US would not tolerate another nation doing to it – but something the US does worldwide through fronts like the US NED.