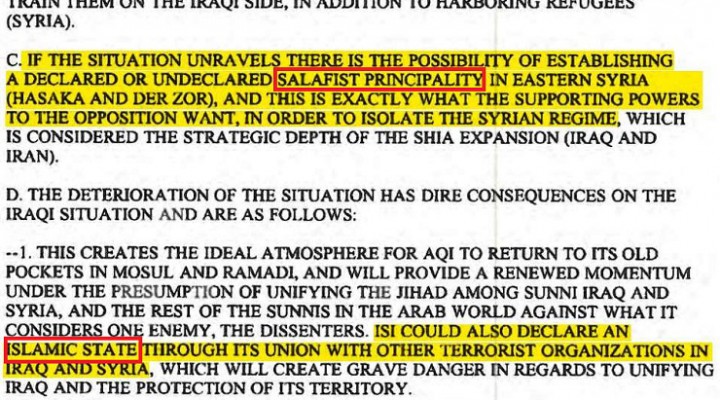 As predicted, the Sri Lankan Easter Day blasts which killed hundreds and injured hundreds more – have been connected to the so-called “Islamic State” (ISIS).

The scale and sophistication of the Easter Sunday attacks on churches and hotels in Sri Lanka suggested the involvement of an external group such as Islamic State, the U.S. ambassador said on Wednesday as the death toll jumped to 359.

ISIS itself would also later claim responsibility for the attacks. The Washington Post in an article titled, “Sri Lankan Easter bombings, claimed by ISIS, show the group maintains influence even though its caliphate is gone,” would claim:

On Tuesday, video emerged of the suspected ringleader of the attacks and seven followers, their faces obscured by scarves, swearing allegiance to the Islamic State and its leader, Abu Bakr al-Baghdadi. The Islamic State also issued a formal communique asserting responsibility for the attacks, which it said targeted Christians and “coalition countries.”

Absent from US diplomatic statements and Western media reports is any mention of ISIS’ inception, its state sponsors, and even admissions by Western intelligence agencies themselves of Washington and its allies’ role in the terrorist organization’s rise.

At face value – devastating and disruptive terrorist attacks visited upon Sri Lanka – a nation that has recently and decisively pivoted from West to East and is now a major partner of Beijing’s One Belt, One Road (OBOR) initiative – is suspiciously coincidental.

Examining the West’s decades of using terrorism – particularly terrorism fuelled by Saudi Wahhabism – and the inception of ISIS itself – leaves Washington and its partners as the prime suspects behind Sri Lanka’s tragic terrorist attack – with its motivation strikingly similar to what prompted the US-Saudi aided rise and use of the Muslim Brotherhood and Al Qaeda throughout the Cold War.

When US-engineered regime change stalled in Syria between 2011-2012, it became clear more drastic and open measures would be required. This included not only the Western media mobilizing a massive propaganda campaign to account for the increasingly overt role terrorist organizations were playing among supposed “moderate rebel” formations – but also in the sudden appearance, rise, and overwhelming force of the “Islamic State.”

It was in a leaked 2012 US Defense Intelligence Agency (DIA) memo (PDF) – however – that revealed it was the US and its allies’ deliberate intent to create what it called a “Salafist principality” in eastern Syria. The memo would explicitly state that (emphasis added):

The “Salafist” (Islamic) “principality” (State) would indeed be created precisely in eastern Syria as US policymakers and their allies had set out to do. It would be branded as the “Islamic State” and be used first to wage a more muscular proxy war against Damascus, and when that failed, to invite US military forces to intervene in the conflict directly.

Since then, ISIS has been used as a convenient and even predictable element amid Washington’s various gambits as it struggles globally to maintain its unipolar world order.

In Asia where Washington’s self-proclaimed primacy has waned in recent years as China rises, traditional “allies” like the Philippines have begun to seek bilateral ties with Beijing negating Washington’s supposed role in underwriting what it calls its “free, open, and rules-based“ order in the Indo-Pacific region.

In 2016, Manila sought to have US troops removed from its territory.

An October 2016 article by the Independent titled, “Philippines president Rodrigo Duterte orders US forces out of country, cutting 65 years of military ties,” would report:

The president of the Philippines has promised to dismantle the nation’s 65-year military alliance with the United States, warning Washington not to treat the nation “like a doormat”.

Rodrigo Duterte has ordered 28 annual military exercises with US forces to be halted and an ongoing US-Philippines amphibious beach landing exercise to be the last in his six-year presidency.

“This year would be the last,” said Mr Duterte, referring to military exercises involving the US in a speech on Friday in southern Davao city.

“For as long as I am there, do not treat us like a doormat because you’ll be sorry for it. I will not speak with you. I can always go to China.”

The following year, beginning in May 2017, ISIS terrorists suddenly appeared, overrunning the city of Marawi. The US used the “serendipitous” development to not only insert US military forces into the fighting – the NYT reported, but has since used the threat of ISIS’ resurgence in the Philippines as a pretext to pressure Manila in maintaining a permanent US military presence in the Southeast Asian state.

US government-funded propaganda outlet “Rappler” would report in a 2019 article titled, “[ANALYSIS] Despite Duterte rhetoric, US military gains forward base in PH,” that:

The United States has gained a forward base for its Pacific Air Force in the Philippines despite President Rodrigo Duterte’s rhetoric against the country’s oldest security ally and former colonial master and his pivot to China.

And despite the “terror” pretext Washington has used to cling to its military holdings in the Philippines, Rappler itself admits that the true goal is confronting China:

The forward deployment of US air assets in the Philippines is important in light of the increasing tension between Washington and Beijing in the disputed South China Sea, a strategic waterway where about $3 trillion of seaborne goods pass every year and where China has constructed man-made islands and begun installing military structures, including possible missile sites.

US-Saudi backed extremism in another Southeast Asian state – Myanmar – has created a growing conflict in Rakhine state where China is attempting to build another major leg of its OBOR initiative.

Even in China itself – the threat of ISIS militants returning from Syria and expanding an already looming US-Saudi backed extremist threat in Xinjiang – plays into Washington’s wider efforts to sabotage OBOR and contain China’s regional and global rise.

The recent blasts in Sri Lanka and ISIS’ now supposed “interest” in the South Asian state follows massive inroads made by China in including the nation in its OBOR initiative. Highways, railways, and ports developed with China’s assistance have transformed Sri Lanka into a strategically valuable partner for Beijing, and yet another example to the world of Washington’s waning influence not only in Indo-Pacific – but globally.

The US went as far as creating ISIS in the first place in a desperate bid to rescue its failed regime change campaign in Syria. It and its partners in Riyadh are now the prime suspects behind ISIS’ coincidental arrival on the shores of a newly established and major OBOR partner.

ISIS is the New Al Qaeda

If the US using extremism to fight its major power rivals sounds familiar – that’s because the US and its Saudi partners used Al Qaeda in precisely the same way throughout the Cold War vis-a-vis the Soviet Union.

Al Qaeda’s precursor – the Muslim Brotherhood – took part in a failed attempt to overthrow Syria – then a Soviet ally – in the early 1980s. Many of the fighters that took part in the failed uprising fled to Afghanistan and participated in the US-Saudi backed war against the Soviet Union there.

The virulent perversion of the Islamic faith that serves as the ideological bedrock of groups like Al Qaeda and now ISIS – Wahhabism – is admittedly a political tool used by Riyadh in the aid of Washington’s decades-spanning geopolitical ambitions.

In a 2018 Washington Post article titled, “Saudi prince denies Kushner is ‘in his pocket’,” it was admitted (emphasis added):

Asked about the Saudi-funded spread of Wahhabism, the austere faith that is dominant in the kingdom and that some have accused of being a source of global terrorism, Mohammed said that investments in mosques and madrassas overseas were rooted in the Cold War, when allies asked Saudi Arabia to use its resources to prevent inroads in Muslim countries by the Soviet Union.

Thus it is all but admitted that the US and Saudi Arabia used extremism as a geopolitical tool to hinder the Soviet Union and both protect and expand Western hegemony globally.

It is admitted that the US and its partners sought the creation of ISIS – its sudden appearance everywhere China is attempting to do business fits the now documented and admitted pattern of Washington’s use of extremism to fight and coerce wherever its standing armies cannot afford to intervene and a degree of “plausible deniability” is desired.

When terrorism strikes – as in any sort of criminal investigation – the first question that must be asked is “cui bono?” To whose benefit? The US played a central role in deliberately creating ISIS. If ISIS is indeed behind the attack on Sri Lanka, then it is by extension an act of terror carried out by Washington.

Destabilizing Sri Lanka – a critical South Asian partner of Beijing and its OBOR initiative – with terrorism and ethnoreligious conflict, serves only the interests of China’s overt global opponent – Washington – as well as elements within India’s ruling elite and intelligence agencies.

The US is both arsonist and self-appointed fireman. And until this racket is fully and repeatedly exposed – until after each terrorist attack the US is put forth as the primary suspect and made to pay a high political price for its use of global terrorism – this game of arson-firefighting will continue at the cost of innocent lives, national development, and global peace and stability.