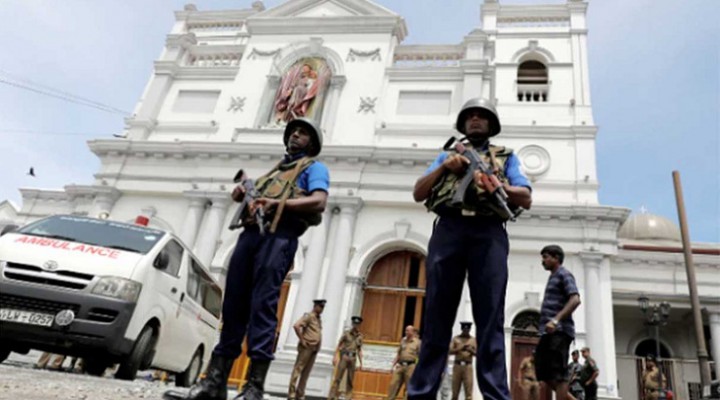 The recent, tragic Easter attack in the South Asian state of Sri Lanka – killing and injuring hundreds – follows a now unfortunately all too familiar formula.

The New York Times has reported in its article, “What We Know and Don’t Know About the Sri Lanka Attacks,” that:

The authorities in Sri Lanka said a little-known radical Islamist group, the National Thowheeth Jama’ath, carried out the attacks, with help from international militants.

It is also reported that these extremists received assistance for the large-scale attack from foreign sponsors. The attack has put Sri Lanka on the map for many in the general public for the first time – but for all the wrong reasons.

Sri Lanka has recently and decisively pivoted toward Beijing as a major partner of the One Belt, One Road (OBOR) initiative. This is despite Washington’s best efforts to prevent it from doing so.

Consequently, extremists fuelled by Washington’s “clash of civilizations” have helped set the stage for growing violence between Sir Lanka’s majority Buddhists and its minority Muslim communities. The resulting violence serves as a medium for US coercion, destabilization, and intervention aimed at undermining Sri Lanka’s unity as a nation, and thus its viability as a partner for China.

A nearly identical ploy has been used in nearby Myanmar where US-backed Buddhist extremists battle against US-Saudi-Qatari backed extremism rising from the ranks of the nation’s Muslim Rohingya minority.

The resulting violence and growing humanitarian crisis – without coincidence – is unfolding in Myanmar’s Rakhine state – precisely where China is attempting to build another leg of its region-spanning OBOR initiative.

Sri Lanka has signed on to OBOR in a big way, with major rail, port, airport, and highway projects all moving forward with Beijing’s support. Sri Lanka is also considered by Western policymakers as one of several among China’s strategic “String of Pearls,” strong points where China can secure maritime routes through waters traditionally dominated by the United States.

These projects are derided across the Western media with headlines like the New York Times’ article, “How China Got Sri Lanka to Cough Up a Port” and France24’s article, “In Sri Lanka, the new Chinese Silk Road is a disappointment” – characterizing Washington’s growing opposition to China’s expanding influence across Asia – a region Washington has long presumed primacy over.
Washington’s ability to compete with China regarding regional development is nonexistent. Instead, the US has tried to tempt nations like Sri Lanka with military aid.
AFP in an article titled, “US gives Sri Lankan military US$39 million, countering China’s investments in strategic island,” would claim:

The US funding for Sri Lanka is part of a US$300 million package Washington is setting aside for South and Southeast Asia to ensure a “free, open, and rules-based order in the Indo-Pacific region”.

This “free, open, and rules-based order in the Indo-Pacific region,” is how the US regularly refers to US primacy in Asia throughout policy papers, diplomatic statements, and even political speeches.

It is obvious that “military aid” can in no way compete with massive investments by China aimed at spurring national development through tangible infrastructure projects.

America’s inability to compete openly and on equal economic footing has given way to political interference and even the use of violence.

In Myanmar, the US is documented to have supported ethnic violence for years. The US all but installed current “State Counsellor” Aung San Suu Kyi into power along with her political party – the National League for Democracy (NLD) lined top to bottom with US State Department-funded “activists.“

Despite the liberal facade constructed by the Western media around Suu Kyi, her political party, and factions supporting both – rampant bigotry and racism pervades all three.

Simultaneously, US-funded fronts posing as nongovernmental organizations (NGOs) have worked to co-opt and wield Rohingya communities as an equal but opposing political weapon while US-allies Saudi Arabia and Qatar have begun radicalizing and arming factions within Rohingya communities to carry out armed violence across Rakhine state.

The resulting conflagration affords the US and its partners a pretext to intervene on an ever expanding scale – giving Washington access to and leverage over Myanmar to counter Beijing’s growing influence.

And in precisely the same way the US has inserted itself into the heart of Myanmar’s political affairs – it is attempting to do so again in other Asian nations – including now Sri Lanka.

Articles from across the Western media including the UK Independent’s 2018 article titled, “Violent Buddhist extremists are targeting Muslims in Sri Lanka,” even establish direct links between Myanmar’s and Sri Lanka’s growing conflicts.
The article would admit (emphasis added):

Currently, Sri Lanka’s most active Buddhist extremist group is Bodu Bala Sena (Buddhist power force, or BBS). BBS entered politics in 2012 with a Buddhist-nationalist ideology and agenda, its leaders claiming that Sri Lankans had become immoral and turned away from Buddhism. And whom does it blame? Sri Lankan Muslims.

BBS’s rhetoric takes its cue from other populist anti-Muslim movements around the globe, claiming that Muslims are “taking over” the country thanks to a high birth rate. It also accuses Muslim organisations of funding international terrorism with money from Halal-certified food industries. These aren’t just empty words; in 2014, one of their anti-Muslim protest rallies in the southern town of Aluthgama ended with the death of four Muslims.

BBS also has links to Myanmar’s extremist 969 movement. Led by nationalist monk Ashin Wirathu, who calls himself the “Burmese Bin Laden”, it is notorious for its hardline rhetoric against the Rohingya Muslim community.

The West’s use of “Islamophobia” to sell its serial wars of aggression and to divide nations around the globe is a classic example of “divide and conquer.

While the West no longer possesses any real means to “conquer” the nations it is now targeting – it does possess the capacity to use resulting divisions to destroy them. If the US cannot hold primacy over Asia – no one will. It is a “War on Peace” waged under the guise of a “War on Terrorism.”

Sri Lanka appears to be but the latest victim of Washington’s now trademark “slash and burn” foreign policy – where it is fueling conflict to consume political orders that oppose its interests, and building upon the ashes ones that do serve them instead.

In the coming days, weeks, and months – not only will more information emerge linking the recent attacks in Sri Lanka to Washington, Riyadh, and Doha’s global network of terrorism – but additional pressure will also be mounted upon Sri Lanka to divest from Beijing and pivot back toward the West.

In reality – Sri Lanka’s violence is an artificial construct carried out by a tiny minority of extremists on either side of an equally artificial ethnoreligious divide. The nation and the region must unite in purpose – as peace and stability benefit them all – while chaos benefits only a handful of waning interests from afar.