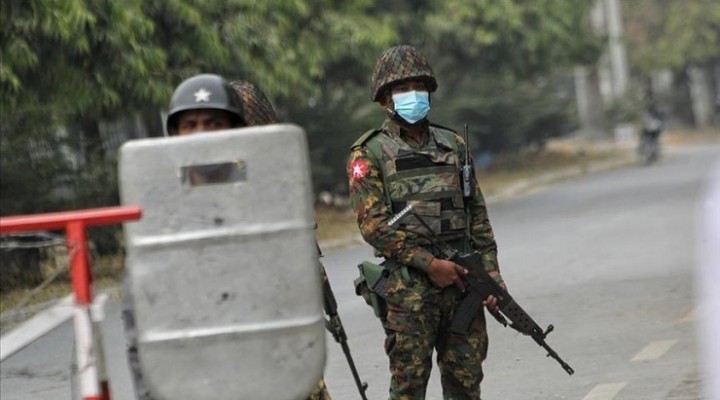 The ongoing violence in Myanmar may have faded into the background of global media coverage as much more intense conflict shapes up within and along Ukraine’s borders in Eastern Europe and as Washington raises the prospect of direct conflict with China in Asia. However, Myanmar’s conflict serves as a point of destabilization which may impact the wider stability of Southeast Asia and thus undermine China in a more indirect but still significant manner.

The conflict began when Myanmar’s military took power from the government of Aung San Suu Kyi and her National League for Democracy (NLD) party in February 2021. While the Western media portrays this as an undemocratic military dictatorship deposing an elected government – Aung San Suu Kyi and the NLD through their collective US backing – had hijacked the nation’s electoral system.

The US National Endowment for Democracy’s (NED) webpage for Myanmar (still called by its British colonial nomenclature “Burma” by the NED) has at least 57 programs and organizations listed involving every aspect of Myanmar’s society from education and the judicial system, to media, ethnic relations, political campaigning, and supposed “human rights” advocacy groups.

With millions of dollars a year pouring in from the US government through NED, a powerful political machine was created capable of effortlessly installing into power pro-Western candidates through elections tainted by this blatant and extensive foreign interference.

The military’s seizure of power was meant to uproot this foreign interference and restore sovereignty throughout Myanmar’s institutions.

Violent protests against the ousting of Aung San Suu Kyi quickly escalated into armed conflict with the backing of the United States, its allies, and a vast network across Southeast Asia of so-called “nongovernmental organizations” (NGOs) funded by Western governments. The remnants of Aung San Suu Kyi’s government formed the “National Unity Government” (NUG) which in turn created an armed “People’s Defense Force” (PDF).

Hundreds have died in the violence. While the Western media claimed Myanmar was heading into “civil war,” in reality the prospect of war has mostly subsided and has been replaced instead by the persistent threat of a high-intensity terrorist campaign carried out by the NUG’s PDFs as well as opportunistic armed ethnic groups that have on-and-off fought Myanmar’s central government since the nation gained independence from Britain in 1948.

Slow Burn Terrorism Sold by the West as “Fighting for Freedom”

Just as the Western media attempted to pass off Al Qaeda and the so-called “Islamic State” in Syria as “freedom fighters,” or paper over Nazi military formations operating within the Ukrainian military, the fact that Myanmar’s opposition is waging a nationwide terrorist campaign has been continusously spun by the likes of the BBC.

A recent BBC video report titled, “Inside the people’s resistance in Myanmar” follows armed fanatics as they destroy civilian infrastructure, raid guard shacks, and at one point in the video – plan and then supposedly storm and destroy the private home of an individual accused of being an “informant” – an accusation that when directed at members of opposition as grounds for arrest by Myanmar’s government is dismissed by Western “rights” groups and governments as “politically motivated.”

The BBC never produces any evidence that the targeted home belonged to an actual informant nor explains how extrajudicial violence against “informants” is justified. The BBC filmed the “raid” which appears entirely staged, complete with BBC cameras set up inside the home to film the militants arriving and entering the house.

While the BBC’s footage was obvious propaganda, the targeting of innocent civilians by deadly vigilantism in support of the ousted US-sponsored client regime is all too real.

The US government through the NED funds virtually every English-language media platform operating in or around Myanmar including Myanmar Now, The Irrawaddy, Democratic Voice of Burma (DVB), and Mizzima. And it is in the pages of these media platforms that admissions are piecemeal made to the level of terrorism and mass murder the “people’s resistance” actually consists of.

Myanmar Now in an August 2021 article would admit a terrorist named La Pyae Wun of the PDF who targeted rail security guards warned his organization would kill anyone at all perceived as working with the government. Myanmar Now claimed;

According to La Pyae Wun, that means that anyone in uniform who continues to work for the junta, including traffic police, firefighters, and even Red Cross workers, is fair game.

Fighters from the Yinmabin People’s Defense Force (YMB-PDF) in Sagaing Region have committed murder and other war crimes, the YMB-PDF leader told The Irrawaddy.

The article would detail the violence which included abducting, coercing, robbing, torturing and killing dozens of people.

Like other US-sponsored proxy wars – particularly in Libya and Syria from 2011 onward – the fanatics the US has helped arm and support in various regime change conflicts often end up as fractured terrorist organizations as likely to kill one another as they are likely to kill innocent civilians or government and military personnel.

While the US claims its interests in Myanmar is the restoration of “democracy,” it is very clear that Myanmar is just one of several proxy crises Washington is cultivating along China’s periphery specifically to undermine, encircle, and contain China itself.

It is no surprise that these same US NED-funded media platforms are eager to report threats and attacks on Chinese investments across Myanmar.

Since Myanmar’s military staged a coup on Feb. 1, no country seems more concerned than China over the unfolding chaos in the Southeast Asian nation. Given its investments in major infrastructure and other projects in the country, as well as its roughly US$16-million per day border trade with Myanmar, Beijing has good reason to be worried. Among its many investments in its southern neighbor, the 800-kilometer-long oil and natural gas twin pipelines that run from Myanmar’s western region to China are seen as having strategic importance. The crude oil pipeline transports 22 million tons annually, while the natural gas pipeline carries 12 billion cubic meters of gas.

Security personnel guarding the pipeline were attacked and killed as part of a wider anti-China component to the US sponsored conflict that also saw nationwide attacks on Chinese factories according to AP.

China-backed projects in Myanmar are now under threat from resistance forces with 16 groups in Sagaing Region warning Chinese-run copper mines in Salingyi to halt operations.

Salingyi is home to the Chinese-run Letpadaung, Sapetaung and Kyesintaung copper mines and resistance groups in Salingyi and Yinmabin have called on miners to down tools and join the civil disobedience movement (CDM) by May 5.

The opposition’s threats not only target Myanmar, China and their collective economic prosperity, but also the lives and wellbeing of workers at the mines. The Irrawaddy is happy to report that the Chinese mining company being targeted is also being sanctioned by the US government, illustrating yet another example of how the US works in tandem with Myanmar’s opposition in the division and destruction of the country and the targeting of Chinese interests in the country.

The US has applied similar pressure elsewhere across Southeast Asia such as Cambodia – a nation targeted by increasing sanctions simply because of its close relationship with China and because of the United States’ desire to isolate it within the Indo-Pacific region.

While the slow-burn proxy war the US is waging in Myanmar is thousands of miles away from the front lines in Ukraine the similarities are inescapable. The US strategy of installing client regimes into power composed of violent fanatics to steer a nation onto an otherwise irrational collision course with its closest and most important trading partners (Ukraine and Russia, Myanmar and China) is consistent in the methods employed.

The solution in Ukraine appears to be Russia’s military eliminating the forces used as proxies by the West to endanger the lives of Ukrainians and Russians alike. For Myanmar, the problem is somewhat more complex. While the US-backed opposition and their militant formations are fond of targeting and killing civilians and the softest of military targets, they avoid direct combat with Myanmar’s military at all costs. Many of the largest armed ethnic groups as well as foreign sponsored groups supporting them reside outside of Myanmar’s territory.

To truly contribute to Myanmar’s stabilization, Southeast Asia and its neighbors including India and China would need to uproot both these armed groups and these Western-sponsored fronts aiding and abetting them from the entire region’s territory.

The Collective Security Treaty Organization (CSTO) was involved in January 2022 in helping stabilize Kazakhstan from US-sponsored violence. The Solomon Islands has reached a defense agreement with China to help prevent future violence like that seen in November 2021.

Although unlikely in the near future, Southeast Asia through ASEAN (Association of Southeast Asian Nations) could conceivably create similar arrangements to confront and uproot Western interference undermining peace, stability, and prosperity in the region – starting in Myanmar and removing from the region’s shoulders the prospect of forign-sponsored political violence everywhere in ASEAN once and for all.

How the New York Times Lies about the Crisis in Myanmar

Myanmar Dumps the US Dollar for China’s Yuan

0 thoughts on “Myanmar Violence: a Slow Burn US Proxy War”