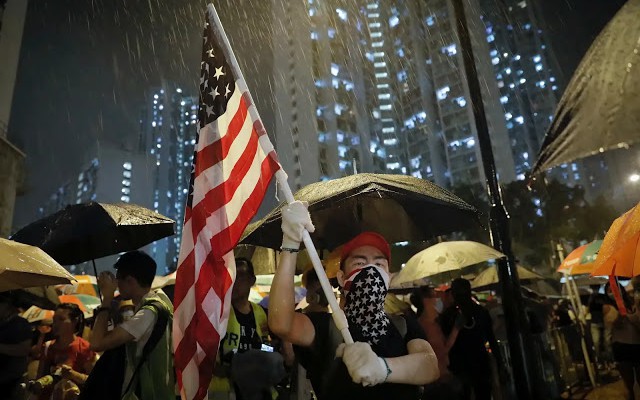 Claims that Western interests are driving unrest in Hong Kong to undermine China have been decried across the Western media as “fake news,” “disinformation,” and even grounds for censorship from platforms like Facebook and Twitter.

Yet a look at the organizations directly involved in leading the unrest and those supporting it reveals unequivocally that it originates in Washington DC – not organically from within Hong Kong itself.

In order to conceal this fact, the Western media has attempted to portray the unrest as “leaderless.” Yet coordinated protests most certainly have both leaders and organizations directing the majority of the movement’s decisions as well as providing the logistical support necessary for the sustained unrest Hong Kong now faces.

Who is Leading Hong Kong’s Unrest

Despite repeated and unrealistic claims that Hong Kong’s recent protests are “leaderless,” they are clearly being led by a combination of opposition political parties, supporting fronts posing as nongovernmental organizations (NGOs), and foreign-funded media organizations.

Even partial admissions of this fact can be found throughout Western coverage of these supposed “leaderless” protests.

…there is one person to whom many protesters have turned to for inspiration and guidance, even though he hasn’t been physically present at any of the demonstrations: jailed activist Edward Leung.

Over the past two to three weeks, protesters have also begun to march with placards of Leung’s face. Meanwhile, Leung’s 2016 election slogan (link in Chinese)—”Reclaim Hong Kong! Revolution of our times!”—has roared back in full force, quickly becoming the clarion call of the current wave of protests.

Edward Leung is a leading figure of the Hong Kong Indigenous political party which holds zero seats in either of Hong Kong’s elected legislative bodies. 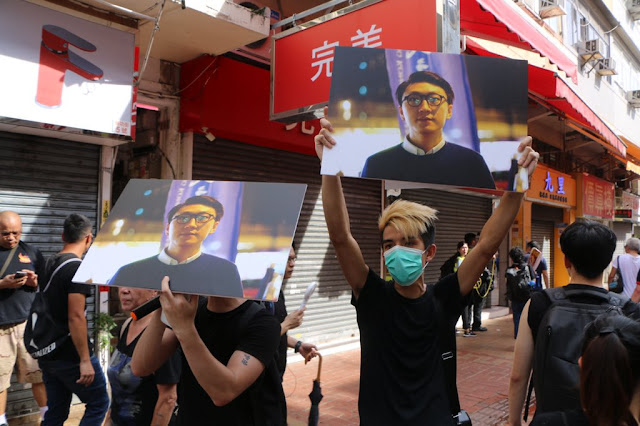 While Quartz describes Leung’s “localism” movement as emphasizing “Hong Kong identity as separate to mainland Chinese” and openly advocating “Hong Kong’s independence from China,” the “localism”movement itself is by no means independent.

In a 2016 South China Morning Post article titled, “‘Not some kind of secret meeting’: Hong Kong Indigenous leaders meet with American diplomats,” Edward Leung and fellow Hong Kong Indigenous member Ray Wong would attempt to explain why they were caught secretly meeting with US consulate staff in Hong Kong.

The photos, published by news website Bastille Post on Wednesday night, showed three members of the group – including Edward Leung Tin-kei and Ray Wong Toi-yeung – meeting two consulate staffers. The quintet reportedly chatted for around an hour and a half, speaking in Putonghua at times, before going their separate ways.

Some mainland media and Chief Executive Leung Chun-ying have both claimed that there were foreign forces behind the city’s pro-democracy protests of 2014.

Today, Edward Leung encourages protesters from jail, including members of his political party to continue sowing unrest across Hong Kong.

Hong Kong Free Press – itself a foreign-backed media platform admittedly partners with US-UK government-funded fronts including PEN Hong Kong – would admit in an article titled, “Jailed Hong Kong activist Edward Leung urges protesters to focus on convincing those who oppose them,” that Leung has been writing letters addressed to the protesters – who in turn carry his portrait around in the streets and have used his 2014 protest slogan during recent unrest.

In every instance, Hong Kong Indigenous has been supported by the United States and its European partners. Holding no elected seats in Hong Kong’s government and thus in no way representing the will of the people of Hong Kong, Hong Kong Indigenous instead represents Washington’s ambitions of maintaining Hong Kong as a foothold in and a pressure point against China. 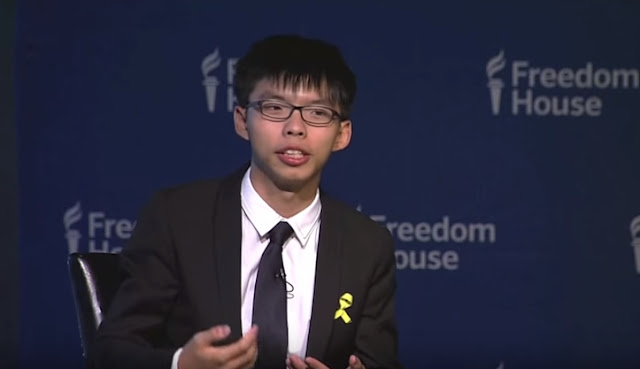 Wong was also a prominent figure during the 2014 “Umbrella Revolution,” and was invited to Washington DC by National Endowment for Democracy (NED) subsidiary – Freedom House – to collect an award for his role in leading the unrest . 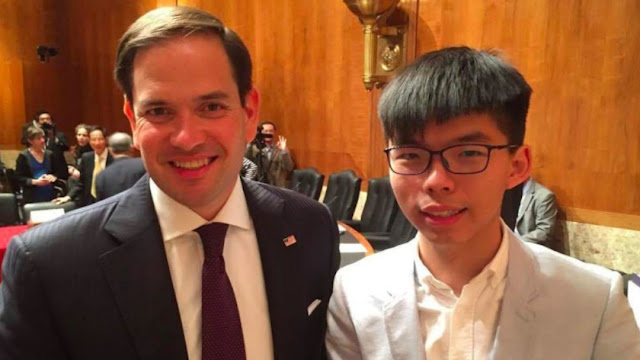 Wong rallied over 200,000 peaceful protestors in 2014 during the Umbrella Revolution. For his efforts, he has been recognized by notable media outlets including Fortune, Time Magazine, Foreign Policy, and London’s The Times. He has been arrested by Chinese authorities on a number of occasions, which sparked international outrage and further protests in Hong Kong.

Wong is now center stage amid current protests with his name regularly appearing in articles like The Times’ “Hong Kong protests: Joshua Wong says British police commander ‘must pay price’,” directing the agenda, focus, and tempo of the unrest.

While platforms like Google, Twitter, and Facebook delete accounts attempting to expose the West’s role in backing unrest in Hong Kong, the Strait Times in an article titled, “Google warns Hong Kong’s Joshua Wong of government-backed hackers,” suggests US-based tech giants continue to provide assistance to Western-backed opposition groups and figures – including Wong – just as they were exposed doing in 2011 during the so-called “Arab Spring.” 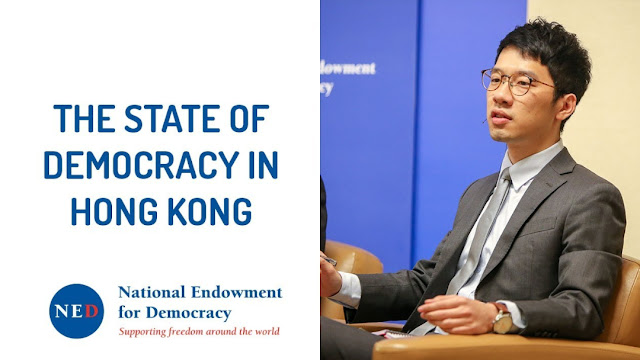 He is afforded not only interviews by prominent Western media organizations, but also editorial space. His op-ed in The Guardian titled, “The extradition bill might be ‘dead’ but in Hong Kong, we cannot afford to back down,” declares his intentions to continue leading protests. He too has been invited to Washington DC.

As recently as May 2019, Nathan Law was invited by the US NED to speak at an event titled, “New Threats to Civil Society and the Rule of Law in Hong Kong” where he would complain about Beijing and specifically about the extradition law that was supposedly the trigger for recent protests. With the law withdrawn – protests continue – clearly aimed at undermining Beijing and China’s wider political stability – a goal of Washington’s rather than any real, local goal.

…pro-democracy group Demosisto said that two of its members – Calvin Chu and William Liu – were arrested on unlawful assembly charges on Sunday.

From Wong and Law literally travelling to Washington DC to collect awards for serving US interests or to speak about their intents to continue serving them, to US-based IT giants personally providing Wong with support, to the Western media promoting Demosisto member Nathan Law’s take on the protests – it is clear there are figures – indeed – familiar figures with known ties to foreign interests – leading this supposedly “leaderless” protest.

Martin Lee: Another prominent leader of both the 2014 and current protests is Martin Lee – founding chairman of the Democratic Party. 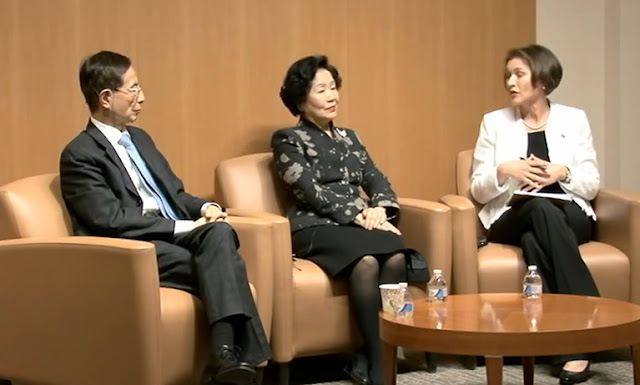 Martin Lee traveled to Washington DC just months before the 2014 protests appealing before the US NED (full video here) for aid in upcoming unrest.

He was also on the same panel as Nathan Law during the more recent NED event in May 2019.

The Nikkei Asian Review in an article titled, “China blames US for fanning flames of Hong Kong protests,” admitted:

U.S. Secretary of State Mike Pompeo met with pro-democracy leader Martin Lee in mid-May, and some demonstrators have since been seen waving American flags. Beijing worries that Washington is stoking the flames of protest in Hong Kong.

Also accompanying Martin Lee in Washington earlier this year was Lee Cheuk Yan – a “labor leader” who recently lost in Hong Kong’s 2018 bi-elections. He represents yet another unpopular figure, leading an unpopular movement, promoted nonetheless by Washington DC and the collective Western media as “representative” of Hong Kong.

Who is Supporting Hong Kong’s Unrest

While the NED repeatedly denies it is funding various figures leading Hong Kong’s unrest directly – it has been documented that it and its various subsidiaries fund organizations these figures work with or for.

The NED’s own website regarding its activities and funding in Hong Kong is deliberately ambiguous to conceal the full extent of its interference in China’s internal political affairs.

The fact that virtually every protest leader currently involved in Hong Kong’s protests has travelled to Washington DC at one point or another specifically to attend events supporting protests in Hong Kong and the undermining of Chinese sovereignty – or has consorted with US consulate representatives in Hong Kong itself – illustrates the deep, foreign-funded nature of Hong Kong’s current unrest.

The NED itself is chaired by prominent American pro-war advocates as well as advocates for regime change. For example, NED board member Elliot Abrams is listed as “on leave” while he attempts to organize the overthrow of the Venezuelan government. Despite the organization’s name, the National Endowment for Democracy merely hides its regime change agenda behind the notion of “promoting democracy.”

The fact that UK-based Hong Kong Watch promotes – verbatim – the protesters’ demands and agenda – with Hong Kong Watch itself being funded by the British government, further illustrates how Hong Kong’s current protests are being engineered and promoted by and solely for the benefit of foreign interests.

Finally, an “Open Letter from 68 NGOs Regarding Proposed Changes To Hong Kong’s Extradition Law,” was signed by organizations overwhelmingly either openly funded by the US and British governments – including the above mentioned PEN Hong Kong and Hong Kong Watch, indirectly through Western-based corporate-funded foundations like Reporters Without Borders and the Committee to Protect Journalists, or who obfuscate the source of their funding as many US-UK-EU funded fronts do to avoid exposing an otherwise glaring lack of legitimacy and agency.

Democracy by definition is a process of self-determination – not determined overseas by Washington, London, and Brussels. Whatever it is protesters in Hong Kong are fighting for – it is not “democracy.”

As the US has plotted for decades – as revealed in the Pentagon Papers leaked in 1971 – chaos in Hong Kong is part of a much larger regional and global strategy to encircle and contain China. Hong Kong is meant to serve as a Western foothold within Chinese territory. Efforts by Washington to promote violent separatism in Xinjiang and Tibet have also been ongoing for decades.

China’s regional neighbors including ASEAN members also face similar subversion and coercion from Washington as part of this same strategy.

By exposing the artificial nature of Hong Kong’s current protests, their illegitimacy can be fully exposed as well – giving the majority of Hong Kong’s population the ability to wrest control of their streets back from this foreign-funded conspiracy against not only Hong Kong, but against China to which Hong Kong once again belongs after nearly two centuries of Anglo-American domination.

0 thoughts on “Hong Kong Crisis: Made in America”