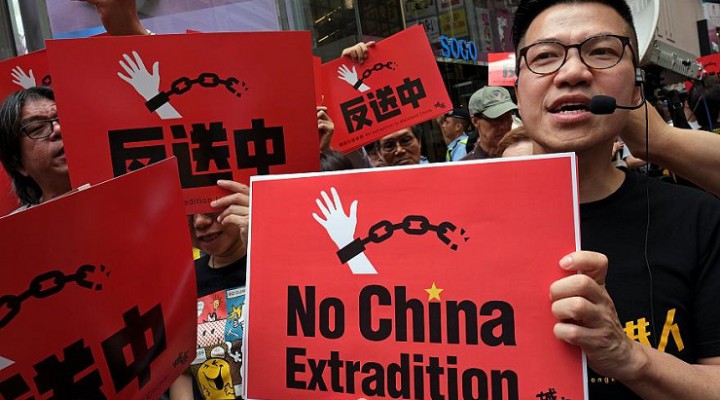 The Western media has been boasting over recent protests in Hong Kong. Western headlines have claimed the protests have “rattled” Beijing’s leadership.

The protests have been organized to obstruct Hong Kong’s elected government from moving forward with an extradition bill. The bill would further integrate Hong Kong’s legal system with that of mainland China’s, allowing suspects to be sent to the mainland, Taiwan, or Macau to face justice for crimes committed anywhere in Chinese territory.

The protests oppose the extradition bill as a wider means of opposing Hong Kong’s continued reintegration with China – arguing that the “One Country, Two Systems” terms imposed by the British upon Hong Kong’s return under Chinese sovereignty in 1997 must be upheld.

The story of Hong Kong is one of territory violently seized by the British Empire from China in 1841, being controlled as a colony for nearly 150 years, and begrudgingly handed over to China in 1997.

The “One Country, Two Systems” conditions imposed by the British were a means of returning Hong Kong to China in theory, but in practice maintaining Hong Kong as an enduring outpost of Western influence within Chinese territory.  The West’s economic and military power in 1997 left Beijing little choice but to agree to the terms.

Today, the Anglo-American international order is fading with China now the second largest economy on Earth and poised to overtake the US at any time. With economic and military power now on China’s side, it has incrementally uprooted the vestiges of British colonial influence in Hong Kong – the extradition bill being the latest example of this unfolding process.

Beijing has reclaimed Hong Kong through economic and political means. Projects like the recently completed Hong Kong high-speed rail link and the Hong Kong–Zhuhai–Macao Bridge have helped increase the number of mainlanders – laborers, visitors, and entrepreneurs – travelling to, living in, and doing business with Hong Kong. With them come mainland values, culture, and politics.

Hong Kong’s elected government is now composed of a majority of openly pro-Beijing parties and politicians. They regularly and easily defeat Hong Kong’s so-called “pan-democratic” and “independence” parties during elections. It is the elected, pro-Beijing government of Hong Kong that has proposed the recent extradition bill to begin with – a fact regularly omitted in Western coverage of the protests against the bill.

Unable to defeat the bill legislatively, Hong Kong’s pro-Western opposition has taken to the streets. With the help of Western media spin – the illusion of popular opposition to the extradition bill and Beijing’s growing influence over Hong Kong is created.

What is not only omitted – but actively denied – is the fact that the opposition’s core leaders, parties, organizations, and media operations are all tied directly to Washington DC via the National Endowment for Democracy (NED) and corporate foundations like Open Society Foundation.

Hong Kong’s opposition has already long been exposed as US-sponsored.

This includes the entire core leadership of the 2014 so-called “Occupy Central” protests, also known as the “Umbrella Revolution.” Western media has portrayed recent anti-extradition bill protests as a continuation of the “Umbrella” protests with many of the same organizations, parties, and individuals leading and supporting them.

The Western media has attempted to dismiss this in the past. The New York Times in a 2014 article titled, “Some Chinese Leaders Claim U.S. and Britain Are Behind Hong Kong Protests,” would claim:

Protest leaders said they had not received any funding from the United States government or nonprofit groups affiliated with it. Chinese officials choose to blame hidden foreign forces, they argued, in part because they find it difficult to accept that so many ordinary people in Hong Kong want democracy.

Yet what the protest leaders claim and what is documented fact are two different things. The New York Times article itself admits that:

…the National Endowment for Democracy, a nonprofit directly supported by Washington, distributed $755,000 in grants in Hong Kong in 2012, and an additional $695,000 last year, to encourage the development of democratic institutions. Some of that money was earmarked “to develop the capacity of citizens — particularly university students — to more effectively participate in the public debate on political reform.”

While the New York Times and Hong Kong opposition deny this funding has gone to protesters specifically, annual reports from organizations opposition members belong to reveal that it has.

In the CCPL’s 2006-2007 annual report, (PDF, since deleted) he was named as a board member – a position he has held until at least as recently as last year. In CCPL’s 2011-2013 annual report (PDF, since deleted), NED subsidiary, the National Democratic Institute (NDI) is listed as having provided funding to the organization to “design and implement an online Models of Universal Suffrage portal where the general public can discuss and provide feedback and ideas on which method of universal suffrage is most suitable for Hong Kong.”

In CCPL’s annual report for 2013-2014 (PDF, since deleted), Tai is not listed as a board member but is listed as participating in at least 3 conferences organized by CCPL, and as heading at least one of CCPL’s projects. At least one conference has him speaking side-by-side another prominent “Occupy Central” figure, Audrey Eu. The 2013-2014 annual report also lists NDI as funding CCPL’s “Design Democracy Hong Kong” website.

Joshua Wong: “Occupy Central” leader and secretary general of the “Demosisto” party. While Wong and other have attempted to deny any links to Washington, Wong would literally travel to Washington once the protests concluded to pick up an award for his efforts from NED subsidiary, Freedom House.

Audrey Eu Yuet-mee: the Civic Party chairwoman, who in addition to speaking at CCPL-NDI functions side-by-side with Benny Tai, is entwined with the US State Department and its NDI elsewhere. She regularly attends forums sponsored by NED and its subsidiary NDI. In 2009 she was a featured speaker at an NDI sponsored public policy forum hosted by “SynergyNet,” also funded by NDI. In 2012 she was a guest speaker at the NDI-funded Women’s Centre “International Women’s Day” event, hosted by the Hong Kong Council of Women (HKCW) which is also annually funded by the NDI.

During a talk in Washington titled, “Why Democracy in Hong Kong Matters,” Lee and Chan would lay out the entire “Occupy Central” narrative about independence from Beijing and a desire for self-governance before an American audience representing a foreign government Lee, Chan, and their entire opposition are ironically very much dependent on. NED would eventually release a statement claiming that it has never aided Lee or Chan, nor were Lee or Chan leaders of the “Occupy Central” movement.

But by 2015, after “Occupy Central” was over, NED subsidiary Freedom House would not only invite Benny Tai and Joshua Wong to Washington, but also Martin Lee in an event acknowledging the three as “Hong Kong democracy leaders.”  All three would take to the stage with their signature yellow umbrellas, representing their roles in the “Occupy Central” protests, and of course – exposing NED’s lie denying Lee’s leadership role in the protests.  Additionally, multiple leaked US diplomatic cables (here, here, and here) indicate that Martin Lee has been in close contact with the US government for years, and regularly asked for and received various forms of aid.

Despite the supposed size of the protests it should be remembered that similar protests in 2014 and 2016 were also large and disruptive yet yielded no concessions from either Hong Kong’s elected government or Beijing.The extradition bill will pass – if not now – in the near future. The process of reintegration it represents will continue moving forward as well.

During this year’s Shangri-La Dialogue – an annual forum discussing Asia-Pacific security – the US would reiterate its designs to encircle and contain China. For an added twist, the US would include nations like the UK and France in its plans – specifically because of Washington’s failure to cobble together any sort of alliance of actual Asia-Pacific states.

China’s growing influence and its style of international relations built on investment, infrastructure development, and non-interference contrasts so favorably with Washington and Europe’s coercive neo-imperial foreign policy that despite a century headstart – the West now finds itself being left behind.

The protests in Hong Kong are organized to delay the inevitable end to the West’s “primacy” over Asia and in particular its attempts to dominate China. In the process, these protests will continue to expose Washington’s methods of fuelling political subversion and the Western media’s role in deceitfully promoting and defending it – compromising similar operations being carried out elsewhere across Asia-Pacific and around the world.

0 thoughts on “US “Color Revolution” Struggles in Hong Kong”