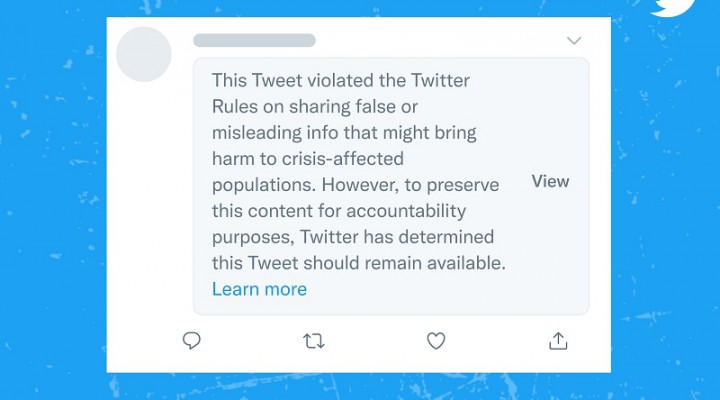 Average users have no recourse if their posts are labeled “misinformation” and thus frozen. There’s nothing that anyone can do since the game is literally rigged against them.

Twitter revealed its so-called “crisis misinformation policy” a few days back which will basically result in tagged posts not being amplified by its algorithm. Users also won’t be able to like, share, or retweet the offending post either. Pretty much, it’s almost as if it wasn’t made at all but is still being kept up on the site “for accountability purposes” according to Twitter’s new warning label. The end effect is that many across the Alt-Media Community (AMC) might soon end up getting censored more than before.

Shadowblocking is already a problem that’s persisted for many years, but what Twitter plans to roll out will make it even worse. While the company claims that “Strong commentary, efforts to debunk or fact check, and personal anecdotes or first person accounts do not fall within the scope of the policy”, there’s no way of holding its censors to account if they mislabel a post on purpose or by accident. It’s also troublesome who they’ll be relying on to determine whether a post is “misinformation” or not.

According to them, “To determine whether claims are misleading, we require verification from multiple credible, publicly available sources, including evidence from conflict monitoring groups, humanitarian organizations, open-source investigators, journalists, and more.” This suggests that the same disinformation propagators that unconvincingly disguise themselves as so-called “fact-checkers” will be the source of determining which posts are “misinformation”.

The criteria for labeling posts are inherently political. Twitter notes that the following can be considered “misinformation”:

“* False coverage or event reporting, or information that mischaracterizes conditions on the ground as a conflict evolves;

* False allegations regarding use of force, incursions on territorial sovereignty, or around the use of weapons;

This means that describing Russia’s ongoing special military operation in Ukraine as precisely that instead of a so-called “invasion” could see one’s post labeled “misinformation” and thus frozen.

Other possible examples include fact-checking the US-led Western Mainstream Media’s hysterical reports about so-called “Russian war crimes” as well as describing that civilization’s weaponization of its so-called “humanitarian operations” as humanitarian imperialism. Simply put, Twitter is probably lying when it insists that it won’t censor “strong commentary” and “efforts to debunk or fact check” other reports since it’ll likely ultimately end up doing so to the detriment of the AMC.

Ukraine is just the starting point for this platform-wide censorship campaign since Twitter concluded its post about this new policy by informing everyone that “we plan to update and expand the policy to include additional forms of crisis.” It specified that Afghanistan, Ethiopia, and India will be the next countries where certain posts about their affairs will soon be labeled “misinformation”. One can easily predict that this will expand to the rest of the world with time.

There’s no solution to this impending problem other than if Elon Musk completes his planned purchase of Twitter and either reverses this policy or ensures that it isn’t abused to censor the AMC. Average users have no recourse if their posts are labeled “misinformation” and thus frozen. There’s nothing that anyone can do since the game is literally rigged against them. The only possibility is to self-censor and include “offending descriptions” of events within the articles that they tweet out, not in the tweet itself.

Billionaires Only Come To The Rescue In Movies And Comic Books

Elon Musk Buying Twitter: Why It’s a Bigger Battle Than You Think