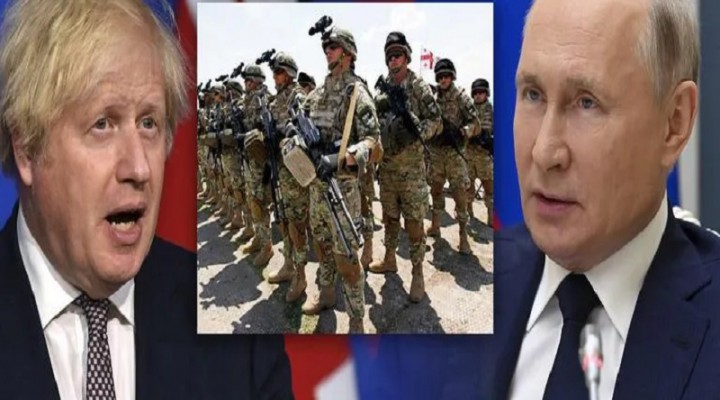 The British army chief’s policy statement that his island-state should prepare for fighting a war in Europe is aimed at preconditioning the armed forces and the population that funds them into expecting a sustained military deployment to Central & Eastern Europe. That doesn’t mean that they’re fated to enter into hostilities with Russia, but just that the purpose of their deployment would be to function as the geostrategic wedge that was explained, especially in the scenario of the “Big Three” convincing Kiev to accept a ceasefire.

New British Chief of the General Staff Patrick Sanders reportedly claimed that “We are the generation that must prepare the Army to fight in Europe once again”, which follows the start of Prime Minister Boris Johnson’s coordinated perception management campaign with NATO Secretary General Jens Stoltenberg for rallying the West to support Kiev for years to come. This military official’s statement is revealing since it shows that the island-state plans to remain a meddling anti-Russian force to be reckoned with in Central & Eastern Europe (CEE). It’s already in a new trilateral alliance with Poland and Ukraine that Johnson reportedly proposed expanding late last month to include the Baltic States as well.

The emerging dynamic is that the junior half of the Anglo-American Axis has been tasked by its senior with dividing and ruling Russia and the EU by exploiting the rabid Russophobia of the bloc’s eastern members in order to drive a wedge between its “Big Three” – France, Germany, and Italy – and Moscow so as to avert any potential future rapprochement between them. Those Three Western European Great Powers just dispatched their Prime Ministers to Kiev last week, during which time it was speculated that they floated a ceasefire proposal. Their interests, unlike their CEE peers’ and the UK’s, rest in de-escalating the Ukrainian Conflict as soon as possible in order to economically colonize that country.

To explain, they were inspired by the proposal that Zelensky shared during last month’s Davos Summit “to take patronage over a particular region of Ukraine, city, community or industry”, which would be too dangerous and at risk of loss so long as the fighting continues. That’s why they’re working hard to pressure him into conceding territory to Russia so that they can then immediately get to work taking over the most profitable parts of his country. By contrast, the Polish-led CEE region and their new British ally want to indefinitely perpetuate NATO’s proxy war on Russia through Ukraine while American decisionmakers seem to be on the fence over which outcome is more advantageous for them.

On the one hand, a perpetual proxy war could atrophy Russian resources and uphold the US’ recently restored unipolar hegemony over Europe on an anti-Russian basis, but it could also backfire by collapsing its proxies’ economies, widening already emerging divisions between them over the conflict (e.g. the “Big Three” vs. UK-CEE), and boggling the US-led West down in Europe instead of focusing more on “containing” China in Asia. A possible “compromise” between these grand strategic visions is for the US to support the gradual de-escalation of the Ukrainian Conflict in light of the increasingly obvious impossibility of Kiev’s victory but ensure that the UK keeps stoking EU-Russian tensions indefinitely.

In practice, this could take the form of supporting the convergence between the Polish-led “Three Seas Initiative” (3SI, with its core being the “Lublin Triangle” that comprises the newly de facto Polish–Ukrainian Confederation and Lithuania) and the UK’s regional alliance plans as a structural wedge between Russia and the “Big Three” (France, Germany, and Italy). That could in turn maintain some unbridgeable differences between them (i.e. geopolitical, geo-economic, and military) so as to perpetually prevent any meaningful rapprochement in the future that would risk eroding the US’ recently restored hegemony over the bloc.

With this in mind, the British army chief’s policy statement that his island-state should prepare for fighting a war in Europe makes more sense since it’s aimed at preconditioning the armed forces and the population that funds them into expecting a sustained military deployment to CEE. That doesn’t mean that they’re fated to enter into hostilities with Russia, but just that the purpose of their deployment would be to function as the geostrategic wedge that was explained, especially in the scenario of the “Big Three” convincing Kiev to accept a ceasefire. Should that happen, then the US would task the UK with dividing Western Europe and Russia via CEE so that the US can refocus on “containing” China instead.

The British Government Has Flushed Honor