HOME / WORLD / The Strategic Consequences Of Myanmar’s State Of Emergency: The Quad vs. China & Russia? 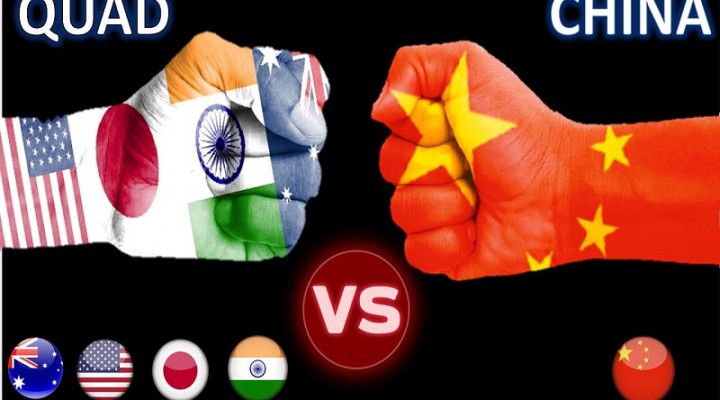 The Tatmadaw’s decision to impose a year-long state of emergency in response to the formerly ruling National League for Democracy’s refusal to seriously investigate the military’s accusations of fraud stemming from last November’s contested elections will temporarily revert Myanmar back to its prior regional pariah status, one which will be exposed to multidimensional pressure from the US-backed Quad while China and Russia seek to stabilize the country in support of its political transition towards new elections in twelve months’ time.

Myanmar entered into a year-long state of emergency after the Tatmadaw detained leaders of the formerly ruling National League for Democracy (NLD) following their refusal to seriously investigate the military’s accusations of fraud stemming from last November’s contested elections. Popularly described as a “coup” by the international media despite technically being in legal alignment with Article 417 of the 2008 Constitution, it’s already drawn widespread condemnation from the US and its allies, including those in the Quad such as neighboring India. This sets the stage for temporarily reverting Myanmar back to its prior regional pariah status, during which time it’s expected that the Southeast Asian state will come to depend more heavily on China and Russia. Those two Great Powers will seek to stabilize the country in support of its political transition towards new elections in twelve months’ time while the former coalition of American-backed states will attempt to undermine it.

Myanmar began its political transition towards a national model of Western-inspired democracy a decade ago when it began implementing reforms in 2011. Western democracy icon Aung San Suu Kyi’s NLD won elections in 2015, after which she was made “State Counsellor” as a workaround to entering some sort of office since the Constitution barred her from holding a seat due to members of her immediate family holding dual citizenship. Contrary to expectations, she generally continued the military-led government’s strategic partnerships with China and Russia while nevertheless expanding ties with new partners such as the US, India, and others. She also supported the Tatmadaw’s security operation in the restive northwestern Rakhine State against the self-professed “Rohingya” Muslim minority. Even so, the military never truly trusted her and accused the NLD of rigging November’s elections despite the Election Commission rejecting this claim as recently as late last week.

All the while, Myanmar continued to experience what’s regarded as the world’s longest-running civil war which has been in effect on and off with varying intensity since shortly after the end of World War II. In short, many of the country’s peripheral minorities (especially those in natural resource-rich areas) are at odds with the ethnic majority Bamar’s centralizing tendencies. This led to various stages of Old Cold War proxy struggles being fought on its territory. Suu Kyi attempted to revive the spirit of the former Panglong Conference first pioneered by her father which federalized the then-Burma, but this provoked even more suspicions from the military since some feared that she was planning to institutionalize the de facto internal partition of the country despite them having previously agreed to peace talks with the country’s many rebels. That could in turn transform Myanmar into a checkerboard of proxy statelets to be divided and ruled in the New Cold War.

It deserves premier mention that Myanmar serves an ultra-significant role in China’s Belt & Road Initiative (BRI) by virtue of hosting the China-Myanmar Economic Corridor (CMEC), an ASEAN analogue of BRI’s flagship China-Pakistan Economic Corridor (CPEC) which also crucially enables the People’s Republic to connect to the Afro-Asian (“Indian”) Ocean without having to pass through the tense South China Sea and Strait of Malacca. Over time, CMEC and CPEC could greatly enhance China’s connectivity with its fellow Global South partners in Africa, thus enabling the People’s Republic to more tangibly actualize former Chairman Mao’s “Third World Theory” of prioritizing South-South cooperation through its current international development policy. The externally provoked exacerbation of Myanmar’s preexisting identity fault lines (Hybrid War) during its ongoing state of emergency could therefore deal an enormous setback to China’s grand strategy in the worst-case scenario.

The NLD has already called on its supporters to protest throughout the country against the “coup”, which could lead to Color Revolution unrest if it’s not promptly brought under control by the Tatmadaw. Given their history of effectively implementing “Democratic Security” (counter-Hybrid War, including -Color Revolution, tactics and strategies), there’s little doubt that the military will succeed in this respect, but this might in turn prompt the US, the Quad (including India), and their allies into imposing sanctions (whether personal, sectoral, etc.) in response. They might also provide an uncertain degree of political support to the protesters, which could dangerously evolve into military aid to certain rebel groups, including “Rohingya” insurgents who are regarded by the Tatmadaw as terrorists. Depending on the phased transition of this indirect adaptive approach to regime change, a new Hybrid War might break out in Myanmar.

I explored the most likely Hybrid War scenarios for Myanmar in a highly detailed four-part analytical series in fall 2016 (I, II, III, IV) that should at least be skimmed by those who are interested in learning more about the complex dynamics of the world’s longest-running civil war. Basically, the “Rohingya”-inhabited areas of Rakhine State just north of CMEC’s terminal port of Kyaukpyu, the long-restive Kachin State bordering both China and India, and the battle-hardened Shan State abutting China and Thailand might end up as the scenes that see the most action. The worst-case scenario would be if India became the US’ “Lead From Behind” vanguard state for waging the Quad’s Hybrid War on Myanmar, which might dangerously draw it and China into a proxy struggle as Beijing would likely double down on its backing of Naypyidaw. Despite publicly declaring its support for “democracy” in Myanmar, India doesn’t seem to have any interest in this role, though it can’t be fully ruled out. Even in the absence of that worst-case scenario, a new Hybrid War on Myanmar could still be pretty intense.

Myanmar’s reversion back to its prior pariah state status would risk repeating the scenario of disproportionate “dependence” on China that ultimately led to the Tatmadaw’s desire to restore “balance” to this relationship by “diversifying” its range of partnerships through its brief experiment with “democracy”. In other words, Myanmar might be entering the second iteration of this cycle which could be destined to ultimately conclude in the same way, even if the process accelerates and is compressed within the timeframe of just one year as officially expected or perhaps a couple if the next elections are delayed for unforeseen reasons instead of two decades. The point being made is that Myanmar’s expected near-immediate return to its prior “dependence” on China could eventually be exploited once more for anti-Chinese aims depending on the outcome of the next elections even though the NLD had hitherto been unexpectedly pragmatic towards the People’s Republic.

Every solution to Myanmar’s most immediate problems rests with China, but it would be wise if Naypyidaw and Beijing expanded their predictably strengthened bilateral cooperation into a trilateral format involving Moscow. The Eurasian Great Power has plenty of experience dealing with cutting-edge “Democratic Security” threats, both within its own borders and also those of its Belarusian, Central African Republic, Kyrgyz, and Syrian allies. This makes its contribution to politically stabilizing Myanmar invaluable and of immense use to its Southeast Asian partner and China, who could collectively learn more about the most effective ways for thwarting Hybrid War threats through their trilateral cooperation. Just as importantly, Russia also has the political will to scale up its support to Myanmar, which no other Great Power of significance other than China has. This makes them perfect partners and could greatly advance the Asian dimension of Russia’s “balancing” act.

Myanmar will require reliable support from its premier Chinese and Russian military partners, hence one of the reasons why it was suggested above for Moscow to expand its cooperation with Naypyidaw into the political dimension as well. Both Great Powers are Myanmar’s long-standing arms partners, but Moscow has recently re-engaged Naypyidaw in order to take their military ties to a qualitatively new level. Defense Minister Shoigu was just there last month, during which time they “agreed that Russia will supply Myanmar with Pantsir-S1 surface-to-air missile systems, Orlan-10E surveillance drones, and radar equipment.” Such supplies will prove crucial in securing Myanmar’s defensive capabilities in the future even though they’re not expected to be delivered right away of course. This speaks to the long-term vision that both countries have, which complements China’s own there while also helping Myanmar “diversify” from its erstwhile “dependence” on Beijing in a “friendly” way.

Keeping with proposed trend of Russia comprehensively improving its presence in Myanmar during the country’s ongoing state of emergency, it follows that Moscow should be invited to invest in part of CMEC or other related connectivity ventures within this geostategically positioned state. Doing so could easily make Russia a key stakeholder in one of Asia’s fastest growing and most promising economies despite the significant risks involved related to its stability. Russia’s “Democratic Security” assistance, true to the pattern that was pioneered in Syria and more recently in the Central African Republic, could result in tacit quid pro quos whereby Moscow obtains valuable stakes in strategic projects in exchange for helping to defend its partner from Hybrid War threats. If successful, then Russia could diversify from its present regional strategic dependence on India and Vietnam in the South-Southeast Asian space along the South Eurasian Rimland.

Myanmar is poised to experience another round of intense international pressure after Monday’s imposition of its year-long state of emergency, though unlike during the 1990s and 2000s, the country is better positioned to deal with this because of its much stronger and balanced strategic partnerships with China and Russia. Moscow in particular is expected to play a larger role in supporting Naypyidaw than before, both because of its restored status as a Great Power and also due to its partner’s desire to lessen its “dependence” on Beijing in a “friendly” way during this sensitive time. It’ll of course remain to be seen whether the Quad-led pressure campaign will evolve into a sustained Hybrid War or not, but that scenario doesn’t seem too likely at the moment since India doesn’t appear to have the appetite for leading it on the US’ behalf, at least not at the moment. That being the case, Myanmar probably won’t be destabilized all that much and will likely survive this pressure campaign.

0 thoughts on “The Strategic Consequences Of Myanmar’s State Of Emergency: The Quad vs. China & Russia?”