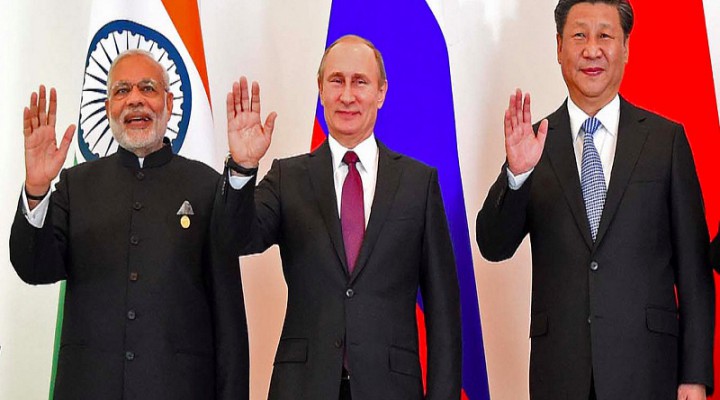 Russian Ambassador to India Denis Alipov described the Russian-India-China (RIC) framework as having “incredible potential” in the global systemic transition to multipolarity during a recent interview with his host’s media, adding that “Certainly, for Russia, this is a priority format, which, we believe, could be supportive in the promotion of a constructive dialogue between New Delhi and Beijing.” He indirectly contrasted it with regional American-led structures by noting that “[RIC] is obviously a very different approach against the policy of some other powers, which purposefully misuse disagreements between India and China in their geopolitical games.”

Without a doubt, Russia intends to play a leading role in facilitating its equally strategic multipolar Great Power partners’ recently reaffirmed shared desire to jointly pioneer the Asian Century. That outcome is absolutely crucial to sustainably ensuring the success of the global systemic transition to multipolarity by simultaneously eliminating the chance for hostile third parties like the US to exploit their preexisting disputes for divide-and-rule purposes alongside encouraging the comprehensive convergence of those two’s game-changing economic potential. RIC is the natural key to bringing about that envisaged future since it already provides a platform for constructive dialogue between China and India like was said.

President Putin earlier suggested that Russia’s Asia-Pacific strategy is to create multipolar institutions through economic means that can in turn accelerate the global systemic transition, so it follows that RIC is the basis upon which everything else will be built. China and India are more than capable of bilaterally resolving their sensitive disputes with one another of border, trade, and other issues, but it’s useful for them to know that their shared Russian strategic partner is always ready to help them every step of the way if asked to do so and if this is agreed by both parties. This is especially the case if military tensions unexpectedly spike in the coming future for whatever reason and regardless of whoever’s to blame.

In that worst-case scenario, one or the other might request Russia’s diplomatic services should their respective representatives not feel all that comfortable interacting with their counterparts and/or unofficially floating certain conflict resolution proposals. Moscow could therefore mediate between them or at the very least encourage its publicly financed international media outlets to discuss whatever the aforementioned proposal might be in order to raise greater awareness of it and “test the waters” with each of its partners, particularly with respect to their expert community and society. This is a unique role that hopefully won’t ever have to be played, but which only Russia could fulfill if needed.

Beyond the diplomatic-military dimension, RIC is also of course extremely important when it comes to strengthening multilateral economic cooperation. Not only is it relevant in terms of doing so trilaterally between each of these Great Powers, but also possibly in pioneering RIC-led investments in third countries like Afghanistan, Ethiopia, and Myanmar, all three of which are beset by various conflicts and require sustainable socio-economic rehabilitation either in the entirety of their territory like Afghanistan does or only in certain parts like Ethiopia and Myanmar do. By combining their pertinent expertise and pooling their financial resources, RIC can make a meaningful difference in improving their people’s lives.

Building upon the proposal for RIC-led socio-economic projects in third parties, these three multipolar Great Powers can also work together in the UN to block the US-led West’s meddling schemes (which include both military and sanctions threats) as well as push forward their own proposals for helping such countries in full accordance with international law. The closer that China and India cooperate on issues of shared interest, both bilaterally and abroad, the greater their mutual trust will become. Once again, they can already do this on their own without anyone else encouraging this, but it’s always useful to know that Russia’s available to help if requested. Plus, its involvement in foreign projects is an asset.

The Asian Century, after all, doesn’t imply that Great Powers from that continent like China and India will replace Western ones like the US in forging their own form of unipolarity. Rather, all that it refers to is that the center of geostrategic gravity is shifting to Asia, which will naturally result in its countries playing a greater role in global affairs. None of them aspire for dominance or to create closed blocs that exclude any others, hence why Russia’s equal partnership with them through RIC powerfully signals their truly multipolar intentions and should thus form the institutional basis of the Asian Century.

The Internationalization Of The Indian Rupee Serves Multipolar Interests

US Suddenly Pretends To Care About Rights Abuses In India