HOME / WORLD / Politico’s Right, The US Has No Real Leverage In Kazakhstan, But That’s A Good Thing

Politico’s Right, The US Has No Real Leverage In Kazakhstan, But That’s A Good Thing 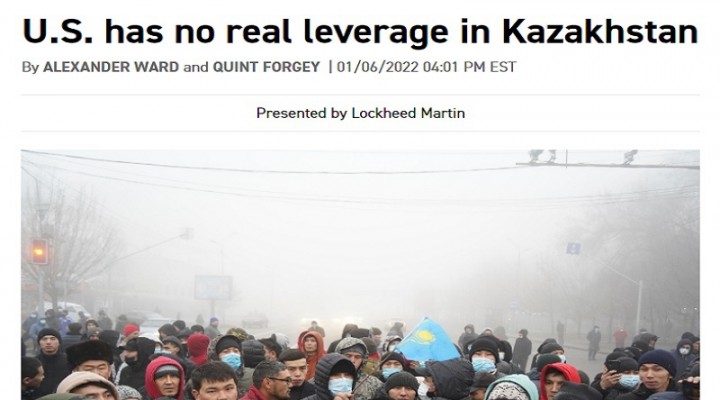 American strategists would be wise to stay as far away from Kazakhstan as possible, control their urge to take rhetorical pot shots at Russia, and concentrate more on reaching a pragmatic series of mutual compromises with Russia for de-escalating the undeclared US-provoked missile crisis in Europe.

Politico published a piece declaring that “U.S. has no real leverage in Kazakhstan”, citing experts who expressed that sentiment and confirmed that America has no military role to play in that Central Asian nation. The article has an anxious tone which implies the authors’ unease over this observation. They write near the end that the US might “bolster the nation’s pro-democracy civil society with funding and push the regime to back democratic and good-governance reforms” but then quoted an expert right after who described the legal and logistical challenges that this nowadays entails there. For this reason and others, the article concludes that “President JOE BIDEN and his team would do well, as hard as it might be, to watch the current horror unfold from the sidelines.”

None of this is a bad thing though since that’s precisely what the US should do. Regardless of the unclear degree to which the anti-Russian faction of its permanent military, intelligence, and diplomatic bureaucracies (“deep state”) might have played a role in events, the official representatives of the American government would do well to stay out of this mess. The Hybrid War of Terror on Kazakhstan not only failed to overthrow President Tokayev (who some US-led Western media voices ridiculously imply carried out an anti-Chinese “self-coup” with Russian military support), but it also resulted in that country’s internationally recognized government requesting its CSTO allies’ first-ever limited peacekeeping mission to guard strategic facilities there.

That second-mentioned outcome shows that this regime change campaign was strategically counterproductive for American interests. Russia’s “democratic security” model of reinforcing national models of democracy (in this case Kazakhstan’s) proved to be more effective than America’s “democracy promotion” one that arguably played a role in generating anti-government sentiment over the years through so-called “NGOs”, at the very least. Put another way, that Russian-led move powerfully countered one of the prevailing narratives that’s propagated by the US-led Western Mainstream Media alleging that the Kremlin is a “regionally destabilizing force”. To the contrary, Russia’s decisive participation in that limited peacekeeping mission immediately helped stabilize Central Asia.

In the face of this strategic setback, the best that the US can do is to “watch [everything] unfold from the sidelines.” The only “horror” that happened in Kazakhstan has nothing to do with Russia but everything to do with what the US dishonestly misportrays as the so-called “peaceful pro-democratic protesters” who carried out an unexpected spree of urban terrorism against that country. Now that they’ve been defeated, the US shouldn’t associate with them nor extend any political or normative support for their destructive regime change campaign. Doing otherwise will only further discredit America’s soft power, which already suffered enough after Russia proved itself to be a regionally stabilizing force in this crisis.

Seeing as how “Kazakhstan’s January 5th Was Way Worse Than The US’ January 6th”, it would completely undermine the basis of the Biden Administration’s political legitimacy at home to give off the impression that it supports the rampant violence that was just unleashed in that Central Asian nation. The US has no leverage to shape the outcome of this crisis, nor should it continue to have anything to do with it. American strategists would be wise to stay as far away from Kazakhstan as possible, control their urge to take rhetorical pot shots at Russia, and concentrate more on reaching a pragmatic series of mutual compromises with Russia for de-escalating the undeclared US-provoked missile crisis in Europe. Focusing on Kazakhstan will only prove counterproductive for the US’ objective interests.

0 thoughts on “Politico’s Right, The US Has No Real Leverage In Kazakhstan, But That’s A Good Thing”