HOME / WORLD / Kazakhstan: Petroleum Protest, Color Revolution, Or Something Else? 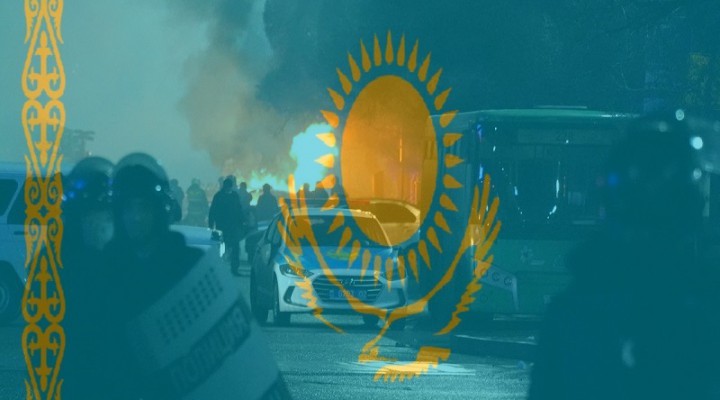 It’s important for observers to acknowledge that Kazakhstan, like most countries, has preexisting socio-economic and political issues that internal forces organically attempt to take advantage of from time to time with or without any foreign connections or encouragement.

The Central Asian nation of Kazakhstan has been rocked by increasingly violent protests since the beginning of the year over the doubling of liquid petroleum gas (LPG) prices that was promulgated as part of its 2019 energy industry reforms io in order to stop this sphere from continuing to operate at a loss when producing that product. Prices spiked twofold in the span of a day or two, which served as the pretext for large-scale unauthorized rallies in its former capital of Almaty and energy hub of Zhanaozen, the latter of which was the scene of rioting in 2011.

The security services seem to have successfully contained the unrest after the government imposed a two-week state of emergency and associated curfew in those two areas. Over 200 people have since been detained, nearly 100 police officers injured, and several dozen service vehicles were damaged as of 5 January. The political component of the state’s de-escalation strategy included the government’s resignation, President Tokayev blaming them and his country’s top energy companies for the sloppy implementation of reforms, and him ordering the six-month regulation of energy prices.

President Tokayev also called on his citizens to show prudence and to refrain from illegal activity such as vandalism and attacks against members of the security services. Additionally, he promised that the country won’t collapse and said that its political system will remain unchanged. Through his proactive and pragmatic leadership, the worst of this seemingly unexpected crisis seems to have already passed. The security services also deserve praise for not responding to violence in a disproportionate manner that could have been manipulated by hostile forces at home and abroad to further escalate tensions.

The question on many observers’ minds is whether the recent events are indicative of an indigenous protest against the petroleum price increase or if traces of a Color Revolution might be discovered. What actually happened appears to have been a blend of opposition and criminal forces opportunistically exploiting a so-called “trigger event” which combined with foreign media speculation in order to raise questions about Kazakhstan’s previously praised stability in its stereotypically unstable region.

In other words, genuine (but nevertheless unauthorized and therefore illegal) protests were hijacked by domestic forces driven by ulterior motives whose actions were in turn taken advantage of by external forces to manipulate global perceptions about this geostrategically positioned country that’s located smack dab in the center of the Russian-Chinese Strategic Partnership. The opposition in former Soviet Republics routinely collaborates with criminal elements and relies on indirect media support from the West to legitimize their superficially political acts of violence aimed at propelling them into power.

Having explained all of this, it’s unlikely that the US-led West is serious about carrying out regime change in Kazakhstan. Rather, it’s already embedded extensive influence networks within this country and many others, which are meant to organically respond to “trigger events” such as preplanned price increases (or more accurately, the planned removal of certain subsidies as part of the state’s sectoral reforms in this case) or elections. More often than not, the targeted state’s political response and the kinetic one of its security services determine whether or not the situation will escalate.

Objectively speaking, the US has no genuine interest in catalyzing uncontrollable chaos in Kazakhstan. That country already closely cooperates with America and is a member of NATO’s so-called “Partnership for Peace”. Furthermore, it also hosts some US biological laboratories. Additionally, America has sought to expand its economic ties with Kazakhstan over the past few years in accordance with its “Strategy for Central Asia 2019-2025”, which focuses primarily on so-called “economic diplomacy” instead of the divide-and-rule geopolitics that Washington’s regional policies had previously been defined by.

Cynics might speculate, and admittedly not without precedent as was just touched upon in the preceding sentence, that the US might try to actively destabilize Kazakhstan in the hopes that terrorist-driven instability would spill over the Russian and Chinese borders. While that’s always possible, such a scenario seems unlikely, especially since Kazakhstan’s Russian CSTO mutual defense ally would assist it through all possible means in order to prevent that from happening. Evidence of American meddling would also immediately end that country’s “economic diplomacy”-driven regional outreach efforts.

That said, it’s indeed possible that some of the opposition and criminal groups responsible for the recent unrest have some ties with American or other Western structures, including NGOs, as well as those which might even be government-organized/-backed (“GONGOs”). Even if that’s the case, however, it would simply prove that extensive networks of influence have already been deeply embedded within that country but wouldn’t be evidence per se that every single action of those associated with them was orchestrated by their foreign partners.

It’s important for observers to acknowledge that Kazakhstan, like most countries, has preexisting socio-economic and political issues that internal forces organically attempt to take advantage of from time to time with or without any foreign connections or encouragement. Although that country is among the greatest success stories since the Old Cold War, income divides still exist and there’s a certain segment of the population that feels left out of Kazakhstan’s astronomical growth over the past three decades. They’re the ones most directly affected by the fuel price spike and who could be influenced by others.

President Tokayev keenly understands this, which is why he rightly blamed his government and energy companies for sloppily implementing the planned sectoral reforms from 2019. They could have done a much better job preparing the population for this price increase, which should have been done gradually and not amounted to a near-instant doubling of the price. He wouldn’t have talked about this if it wasn’t true, which is why observers shouldn’t wildly speculate that everything is part of some American Color Revolution plot. If it was, President Tokayev would have called it out instead of blamed his government.

Like with every development that attracts international attention, there are several lessons to be learned by what just happened in Kazakhstan. First, energy sector reforms must be carried out in a gradual and responsible manner in order to avoid inadvertently serving as a “trigger event” for self-interested political and criminal forces to exploit. Second, those well-intended individuals who’ve been misled into participating in unauthorized (illegal) rallies should at the very least behave responsibly by abstaining from any other lawbreaking activities such as vandalism and attacking police officers.

Third, states of emergency and curfews are effective means for containing sudden unrest. Fourth, security policies must be accompanied by political ones as well as those which attempt to regain control of the national narrative in order to successfully de-escalate the situation exactly as President Tokayev did. And fifth, not every seemingly unexpected outbreak of unrest is an American Color Revolution plot, so observers would do well to more objectively assess fast-moving situations before jumping to conclusions like some in the Alt-Media Community already did over the past few days.

0 thoughts on “Kazakhstan: Petroleum Protest, Color Revolution, Or Something Else?”