HOME / Economy / The EU Begins the Start to Retreat 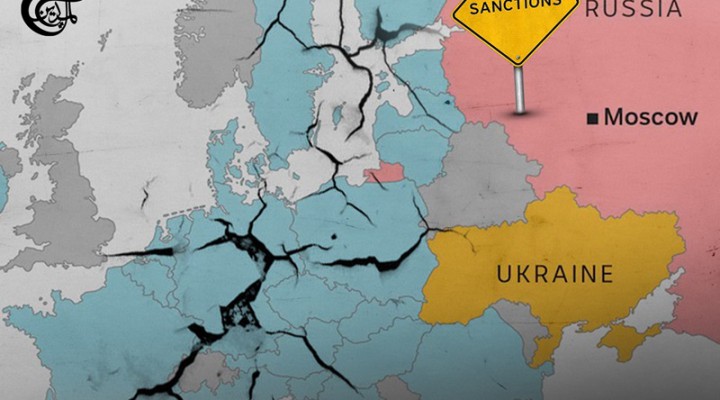 The EU has begun its retreat: It has taken the first steps in unraveling energy and food sanctions on Russia. Will other steps follow? Or will the pan-West, Russia-phobic axis strike back with further belligerence?  Nothing is settled yet, but were the retreat to continue, and the separate Ukraine grain export accord hold together, it will be generally good news for the Region.

The bigger issue is of whether – even a more substantive EU retreat ensues – this will make a difference to the larger economic paradigm. Unfortunately, the answer is very probably not.

The EU’s seventh package of sanctions on Russia, whilst ostensibly posing as an increase in sanctions (which it is for certain gold imports into the EU that have no real impact on Russia) – and with a small extension of the list of controlled (mainly tech) items – the package represents, in reality, a concealed retreat.

For, as one digs deeper, the package substantially alleviates sanctions in key areas. Firstly, the package ‘clarifies’ aviation measures (Comment: Though opaquely worded, this passage seems to be quietly permitting the export of spare Airbus parts to Russian aviation fleets). The package says that to avoid any negative consequences for food and energy security around the world – and for clarity – the EU extends the exemption to transport of agricultural products, (food) and fertiliser exports and the transport of oil from Russia to third countries. Furthermore, it exempts third party purchases of pharmaceutical and medical products from Russia.

The EU likes to claim that their sanctions never included food and fertilisers, and that the suggestion that they did, is propaganda. Their argument, however, is disingenuous. The EU sanctions’ legalistic wording was so open, so opaque, that it was not clear whether they did, or didn’t. Trading companies understandably feared retroactive fines for breaking sanctions. They had the bitter experience of the US Treasury refusing to say explicitly what was allowed, and which not; and in the case of Iran, out of the blue, hitting European banks with monstrous fines.

The explicitness matters: Food, agricultural products and fertiliser transported to Third Countries are exempt from sanctions. States like Egypt can now import wheat from Ukraine, Russia – and effectively from Belarus too, (since it now forms a single market with Russia).

Equally, the third country transport of Russian oil to states such as China, India, Iran, and Saudi Arabia are now explicitly exempt.

Here is another disingenuity – if not hypocrisy – implicit within this exemption. The EU, all along, has been virtue signalling how they would ban Russian energy sales to the EU – and how that the resulting loss of revenue to Russia, would starve, and cripple Moscow’s war effort in Ukraine.

Well, first Russia insisted on payment for its gas in roubles. The EU said ‘no’, but then relented.  Then the EU targeted Russian oil, and the G7 touted a ‘cap’ on oil prices.  But states such as China and India said ‘no’.  And now, the EU has relented on the transport of Russian oil by Third Parties. (Greek and Cypriot tanker owners had already arm-twisted their governments into insisting on an earlier exemption, for them).

What is going on? The oil market has been volatile recently, as the US has tried to manipulate the ‘paper market’ (which is way larger than the physical market), in order to contrive a dip in prices in the Bent and WTI index. Again, the object has been to hurt Russia – and to facilitate Yellen’s ‘oil cap’ by getting prices closer to the $60 a barrel on which Yellen has set her capping hopes.

It hasn’t worked, and it seems the White House just wants oil prices down – full stop.  Even the hawk, Victoria Nuland, said Friday that the US and its allies need Russian oil supplies to enter world markets, otherwise the cost of this resource will start to rise again: “We need to see the presence of Russian oil on the world market, otherwise the shortage of oil will lead to a new rise in prices.”

Realism seeps in!  Putin achieves all his key demands in respect to the food crisis – and today, is even selling a slightly increased volume of oil.

The price of oil will indeed fluctuate. It will respond however, more to the effects arising from depth reached in the coming recession, than on market manipulation, and Yellen’s price capping efforts.  The western Establishment is still trying to get its head around the new reality that commodities are seen to have innate value, whereas fiat currencies such as the dollar don’t.  The new commodity era represents a psychological global shift towards intrinsic value, at time of rising inflation.

And where will that ‘now exempted’ Russian oil transit, be headed?  Why, to the EU (largely). This is where the disingenuity becomes evident: India buys Russian oil, runs it through its refineries, and sells ‘Indian refined products’ where?  To the EU.  Ditto for other cargos.  Ditto for Saudi Arabia. Those vessels’ bills of lading won’t mention Russia as they arrive at their EU destination.

In short, the EU is quietly facilitating the bypass of its own proclaimed ‘crushing’ sanctions regime.

Might this this small step of retreat however, tip the wind out from the swelling sail of economic crisis?  No. There are two major sources of inflation. There’s the supply side and the demand side. Either one of them can drive inflation, but they’re very, very different in terms of how they work.

No, the Central Bankers do none of those things, and so they can’t fix that part of the problem. Raising interest rates has no impact on the supply side shortages we’re seeing. And that’s the direction from which inflation – that is driving European recession – is blowing.

U.S./NATO Wants Whole World to Choose Sides, But Outside of Europe Most Refuse

The ‘Wrong’ Turning Brings on the ‘Fourth Turning’

The Deeper Meaning of Ukraine

“Russia is presented as a threat at the recent G7 summit”

The scuttling of peace in Europe

One thought on “The EU Begins the Start to Retreat”