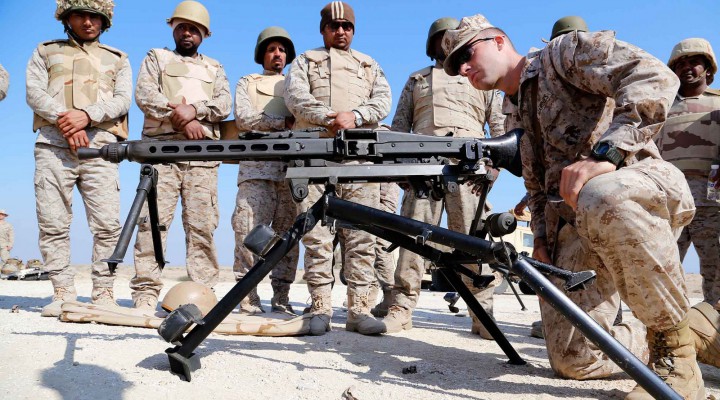 MPN- Newly released documents show that the U.S. has been secretly training airmen from the United Arab Emirates (UAE ), a major partner in the Saudi-led coalition that is waging war on the poorest nation in the Middle East.

The United States’ role in the devastating war on Yemen has been more involved than previously reported, marking the second time in recent months that the U.S. military has been caught red-handed doing things that they had long claimed they weren’t.

Newly released documents show that the U.S. has been training airmen from the United Arab Emirates (UAE ), a major partner in the Saudi-led coalition that is waging war on the poorest nation in the Middle East.

In response to a Freedom of Information Act request, the Air Forces Central Command released a document from December 2017 that details the United States’ training of some 179 airmen “to prepare for combat ops in Yemen.”

In response to questions from Yahoo News, a spokesman for U.S. Central Command, Lt. Col. Earl Brown, doubled down on the U.S. claim to non-involvement. He denied that the U.S. “conducted exercises with members of the [Saudi-led coalition] to prepare for combat operations in Yemen.”

Central Command’s Media Operations Chief, Lt. Col. Josh Jacques gave a similar denial: “As we said before in our statement, we do not conduct exercises with members of the [Saudi-led coalition] to prepare for combat operations in Yemen.”

Nobody at the command would address the document released by the Department of Defense to Yahoo News.

In November, the Department of Defense halted its in-flight refueling of Saudi coalition jets on missions in Yemen. Ending the practice had long been a key demand as Saudi coalition bombs have obliterated much of Yemen’s infrastructure, pushing the country to the brink of famine. In October, the United Nations said that 13 million people – a number greater than the Jews, Roma, homosexuals and others killed in the Holocaust – are facing starvation as a result of what could be the “worst famine in the world in 100 years,” which is entirely man-made.

Then, in December, it was revealed that U.S. taxpayers had been forking up the cash to cover the in-flight refuelings as the Pentagon had failed to charge Saudi Arabia and the United Arab Emirates due to “errors in accounting,” MintPress News reported. But it was only revealed after some lawmakers requested specific information on reimbursements from the coalition from the Department of Defense.

The Saudi-led coalition, of which the U.S. is a participant, has pummeled Yemen relentlessly since 2015, when a popular uprising installed a Houthi government in the capital, forcing the Saudi-backed government into exile. With the assistance of targeting intelligence and billions of dollars in weapons sales, including precision-guided missiles, the United States has enabled much of the atrocities carried out by the coalition.

For example, a Saudi airstrike on a bus that killed 40 children and 11 adults in August used a bomb sold by the U.S.

As a direct result of the bombing campaigns of the Gulf monarchies, the situation in Yemen has become the worst humanitarian disaster in recent history. According to a December report from the Armed Conflict Location & Event Data Project, more than 60,000 people have been killed directly in the conflict.

That figure is significantly higher – six times – than United Nations’ estimates. “ACLED’s estimation of Yemen’s direct conflict deaths is far higher than official estimates — and still underestimated. Fatality numbers are only one approximation of the abject tragedy and terror forced upon Yemenis from several sides. This cannot be overstated,” ACLED Executive Director Clionadh Raleigh said.

Additionally, the report states that 6,480 civilians have been intentionally killed in the conflict – not fatalities due to “collateral damage.” The Saudi-led coalition bears responsibility for the majority of that bloodshed, according to ACLED. The non-governmental organization added that November was the most violent month it had on record.

Meanwhile, a November report from Save the Children claimed that 85,000 children in Yemen may have died due to extreme hunger and disease related to the conflict since its outbreak.

While Saudi Arabia has taken most of the heat for its role in the destruction of Yemen, the UAE also shares responsibility for a number of abuses and potential war crimes there. Rights groups have accused the UAE, based on testimony from scores of Yemenis, of running a network of secret prisons in southern Yemen where people are taken to be tortured.

The United Nations Human Rights Council has also said that the Coalition may be guilty of war crimes.