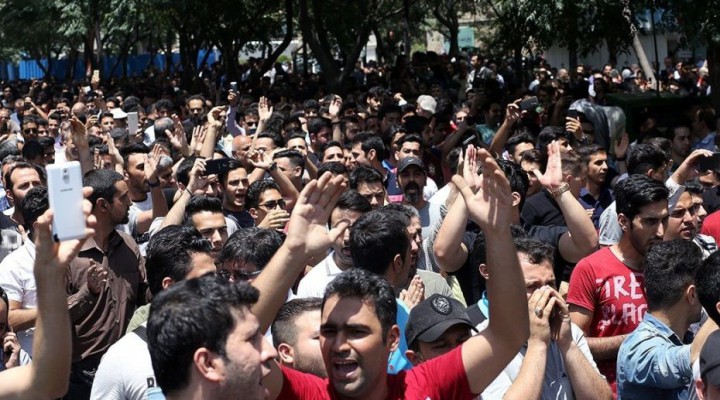 “Something is happening here. But what? And why now?” In the last 12 weeks, protests have spanned five continents – from Chile, to Paris, to Lebanon, Iraq and Iran. They are so geographically disparate, and apparently heterogeneous, that they seem to defy any attempt to view them as a unified phenomenon. But is it true that there is no common theme? Is that not rather too convenient for the élites? (i.e. no need to dwell or think of changing course).

Mainstream media frequently label them ‘pro-democracy’, but that does not seem ‘to fit’. It is just ‘messaging’. For, if anything, the protesters’ experience of democracy plainly is one their main discontents: Democracy – as experienced – too often has become the institutional tool to smother smouldering anger. This is pretty evident across the Middle East, where a straight-forward iconoclasm is one prominent thread to the ‘revolutions’.

The other widespread explanation is that these are simply ‘pocket-book’ revolts: “In Chile, anger over a 3 percent raise in metro fares revealed a population not merely miffed by “pocketbook issues” – the fare hike pushed transit costs to 21 percent of the monthly salary of a worker earning the minimum wage—but so exhausted by austerity, so squeezed by low wages and long hours and debt, so fed up with the greed and blindness of the wealthy few who run the country that they were ready to burn almost everything down”, observes The Nation.

Such observations are customarily met with the standard retort that globalisation and free trade has ‘floated all boats’: “We know that globalization – and increased integration over the past generation, [says Christine Lagarde] – has yielded many economic benefits for many people.”

‘Pocket-book discontents’ – nothing new here? Fifteen years ago, Joseph Stiglitz, an economics Nobel prize-winner, wrote a book entitled, Globalism and its Discontents, in which he said about the growing opposition in the developing world to globalizing reforms:

“It [had all] seemed such a mystery: People in developing countries had been told that globalization would increase overall wellbeing. So why had so many people become so hostile to it? How can something that our political leaders – and many an economist – said would make everyone better off be so reviled? One answer occasionally heard from the neoliberal economists who advocated for these policies is that people are better off. They just don’t know it. Their discontent is a matter for psychiatrists, not economists.”

Answering his own riddle as to why the revulsion, Stiglitz retorts:

“But income data suggest that it is the neoliberals [rather] who may benefit from therapy. Large segments of the population in advanced countries [as well as those in the developing world], have not been doing well”.

Ahhh … sighs The Economist: “The practices that underpin prosperity are not popular”. (But persist with them, we must).

The disconnect between élite perception and mass experience is as widespread as it is fundamental: All of the countries recently experiencing popular revolts have for decades been ruled by a single economic model: neo-liberalism.

Is this it, then? Is it all about the inequalities of the distribution of wealth, or is there more to this effusion of protests?

In the aftermath of WWII, there came then too, angry young men and women: full of furious despair at a dead empty world, in which they felt like strangers. Where they saw no sense, no values worth embracing, ‘nor fighting for’. And their answer was not some Nietzscherian heroic ‘will-power’ to strike an existentialist pose, but rather to sink into pure, indulgent, narcissism: this “Woodstock generation” of the late 60s threw themselves at music, nudity, sex, drugs and eastern ‘new world’ religion – with deliberate, willful abandon.

They turned their back on the ‘austerities’ of existentialism and nihilism. They sought not to stoically cope with meaninglessness, but rather to search out authenticity – something, anything, that would provide some meaning to life.

It was not just a shift along the continuum of ‘modernity’ that was happening. It was ‘a turning’: a complete severance with the past. Values previously questioned by only a minority in earlier times, in a trice, lost all relevance for everyday life. Historic human experience was derided completely. The experience of earlier generations, of anyone over 30 years of age, in fact, was believed to have nothing – nothing at all – to say, and nothing to contribute, to this youthful generation. Life was being started anew, this generation believed.

A wild desire seemed to have flared up in this ‘Woodstock’ generation for experience: for the experience of something authentic, be it intense emotions, ecstatic visions, passionate sex, pain or pleasure. Anything really, that would sooth the rage against this “whole toneless, flat, normal, sterilized life: this complacent, plump consumer optimism” (types of sentiment that Hermann Hesse put in the mouth of one of his characters in Steppenwolf).

Well, we have a new generation today. It is the Millennials – and they are expressing their anger across the globe in their diverse modes. (The Woodstock generation – the Children of Plenty – when middle-aged, typically went on to Wall Street, and became wealthy and more indulgent). Today’s wide protests are, like those of the 60s, also strikingly absent on detail-politics. They are neither Left, nor Right, nor Dictator-orientated, nor fully bottom-up or populist – but are joined in deeply opposing a system (often externally imposed), designed precisely to void real politics, in the interest of safeguarding the hyper-financialised global governance. Surely a warning lies inherent within the anti-system, iconoclastic, nature of these widespread protests? It is that this generation posits a direct link between the global neo-liberal economic model and their own disdained elites and system, as mere passive servants to that model.

These Millennials and protestors have not plunged into seeking experience, as it were, through the flesh, as much as did the Woodstock generation, but into a bleak (and probably lonely) future – of scarce jobs, poor pay, and the drab, humdrum, existence of debt-servitude, in a post-2008 era of austerity. Is it surprising, therefore, that computer gaming has become a substitute reality for many western young, in place of Woodstock narcissism? Instead of pursuing an empty, drab, solitary life, Millennials can be football stars, warriors, or lead heroic lives, in another ‘reality’. One that arguably, may be no more, or no less, ‘real’?

Here is the point. Are we witnessing merely a global ‘pocket-book’ revolt, or something deeper: A fracture – an ontological fracture – in which ‘life’, reduced to mere villeinage, in a toneless, sterilized, consumerist neo-liberal modernity, is experienced as something sheared away from the inner depths to human consciousness: The latter now smothered by the purely literal and the material.

It represents the conviction, as Shakespeare put it, that there are invisible – but just as real – moral boundaries, patterns and innate aspects, latent to our being, and away from which, we may not venture – lest we bring down “heaven and earth” crashing down upon us, in consequence (as inevitable tragedy, or madness).

In short, are we at such a point of inflection? Are the global protests then harbinger of a major discontinuity in culture and values? Are these events suggestive of a neo-liberal ‘modernity’ that is a failure precisely because it forecloses on the ability of men and women to follow those ‘innate aspects latent to their being’, and to reflect those in a dignified way, in the conduct of their life at the material plane? If so, spreading the wealth more equitably will not serve sufficiently as remedy.

If this is indeed so, we might heed the counsel of Stephen Hadley given at Aspen in mid-2016: It was Hadley who having served as National Security Adviser during Bush’s second term, broke with the then Aspen consensus to warn plainly that foreign-policy experts should pay careful attention to the growing public anger; that “globalization was a mistake”, and that “the elites have sleep-walked the country into danger.”

“This [2016 US Presidential] election isn’t just about Donald Trump,” Hadley argued: “It’s about the discontents of our democracy, and how we are going to address them … whoever is elected, will have to deal with these discontents. If not, the anger against the system may be played out next time in the streets…”.