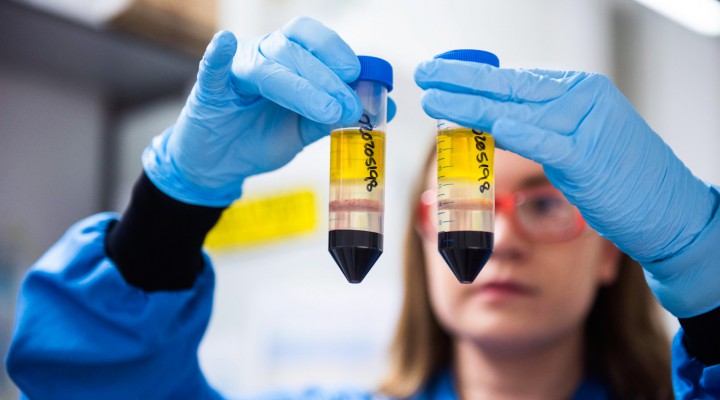 “The Oxford vaccine is… striking, since the point was to pay researchers, but not to rely on patent monopolies to generate large profits.” – Economist Dean Baker

MPN– The world is abuzz today after a team of medical researchers from Oxford University in the United Kingdom announced that advanced trials of their experimental coronavirus vaccine were a roaring success, with the vaccine possibly being rolled out before Christmas. Testing was done on 24,000 volunteers in the U.K, Brazil, and South Africa, with an average effectiveness of over 70%. However, when the vaccine was administered as a half dose, then patients were later given a full one, effectiveness increased to 90%. Encouragingly, there were no serious side effects registered among any of the volunteers, none of whom had to go to the hospital as a result of being immunized. The U.K. government has already ordered 100 million doses.

Professor Andrew Pollard, Director of the Oxford Vaccine Group and chief investigator of the experiment, was delighted, stating that,

These findings show that we have an effective vaccine that will save many lives. Excitingly, we’ve found that one of our dosing regimens may be around 90 percent effective, and if this dosing regimen is used, more people could be vaccinated with planned vaccine supply. Today’s announcement is only possible thanks to the many volunteers in our trial, and the hard working and talented team of researchers based around the world.”

Even better news is that the Oxford team developed the breakthrough vaccine with the explicit intention of supplying it around the world on a not-for-profit basis, meaning that the poorest nations on the planet will not have to worry about being shut out of a cure due to lack of funds. This was certainly not the case with other solutions developed by the likes of Moderna or Pfizer. Indeed, the world’s richest countries had already bought up the majority of their COVID-19 vaccines, whose secrets were being closely guarded, rather than shared widely to help the rest of humanity.

Large scale manufacturing of the vaccine has already begun in ten countries, according to a press release from the University of Oxford. “Today marks an important milestone in our fight against the pandemic. This vaccine’s efficacy and safety confirm that it will be highly effective against COVID-19 and will have an immediate impact on this public health emergency,” said

Pascal Soriot of AstraZeneca, a bioresearch company that partnered with the 924-year-old educational institution on development and testing. “Furthermore, the vaccine’s simple supply chain and our no-profit pledge and commitment to broad, equitable and timely access means it will be affordable and globally available supplying hundreds of millions of doses on approval.”

Good for people, bad for profits

Today’s good news will doubtless challenge corporate pharma’s profit margins (Moderna’s share price has more than quintupled since the beginning of the year), but it also challenges corporate pharma’s logic and justification for high drug prices in the first place.

The pharmaceutical industry argues that research and development are extremely expensive, that market competition and profit breed innovation, and is the only way to ensure new drugs are developed. Yet examples like the Oxford and the four separate Cuban vaccines in development suggest that this logic is faulty, at best.

“This should really encourage some rethinking of biomedical research, as should the Moderna vaccine,” Dean Baker, senior economist at the Center for Economic and Policy Research told MintPress today.

There was this absurd view that somehow we could only get good drug development with the lure of a patent monopoly. The Moderna case is noteworthy because, basically the government paid the full cost of developing the drug upfront. We did also give them patent monopolies, but since the government already paid for the research, this was a handout to the company.”

In reality, a huge amount of medical research is actually paid for by the taxpayer, as Baker has already shown, only becoming the intellectual property of private corporations once it is profitable.

Apart from their willingness to share it with the world freely, the Oxford-AstraZeneca vaccine has other benefits over its competitors. Firstly, they aim to make and sell it for $3-4 per shot, rather than the $20 Pfizer charges, or the $25 for Moderna’s offering. Oxford and AstraZeneca have committed to selling the vaccine to developing countries at cost price. And unlike the costlier Pfizer vaccine, it does not have to be stored at -94 degrees Fahrenheit but can be kept in an ordinary refrigerator, making its storage and distribution straightforward everywhere. Further trials of the vaccine involving 60,000 people in the United States, Kenya, Japan, and India are ongoing. The vaccine is based on a weakened version of a common cold virus and that has been genetically engineered so that it cannot grow in humans. “What we’ve always tried to do with a vaccine is fool the immune system into thinking that there’s a dangerous infection there that it needs to respond to — but doing it in a very safe way,” explained Professor Pollard. “So we get the immune response and we get the immune memory … waiting and ready if the pathogen itself is then encountered.”

Many will be relieved that an alternative offering to the ones on offer from Pfizer and Moderna has been green-lighted, although suspicion of vaccines remains high, with only 58% of Americans stating that they would be willing to receive a free, FDA-approved shot when the time comes. This, despite the fact that well over 12.5 million Americans have already tested positive for COVID-19, and over 262,000 deaths have been recorded.

Part of the problem is doubtless due to companies like Pfizer’s inglorious history. In 2011, for example, the company finally agreed to pay compensation to families of 11 Nigerian children who were killed in a meningitis trial where the pharmaceutical giant did not gain their parents’ consent to use experimental drugs on them. Two years later, Pfizer was forced to pay half a billion dollars in fines over a false and misleading marketing campaign and $55 million to victims who claimed it did not warn them about the risks involved in taking its acid reflux drug Protonix. And last year, 44 states came together to file a civil lawsuit in a federal court against the giant, accusing it of “one of the most egregious and damaging price-fixing conspiracies in the history of the United States.”

AstraZeneca, the British/Swedish multinational partnering with Oxford University, is far from blameless itself, however. Over the years it has been convicted of falsely advertising its products, releasing, overcharging Medicare and private insurance companies, and of carrying out shockingly sexist employment practices.

While investors have forgiven the company for these transgressions, it appears that they are more shocked by the news of a not-for-profit COVID vaccine. Today, the company’s share price slid by two percent following the announcement of the vaccine’s effectiveness.

Multimillion-Dollar Settlement For Misleading Consumers: Just Another Day At Pfizer

Baker suggested that the story of the Oxford vaccine should serve as an example of how a more efficiently and sanely organized healthcare system could look like, telling MintPress that,

The Oxford vaccine is even more striking, since the point was to pay researchers, but not to rely on patent monopolies to generate large profits. We ended up with a cheaper, better vaccine, in the sense that it is much easier to store and distribute. It would be great if we could take away some lessons from the experience of vaccine development in this crisis and get away from the antiquated patent monopoly mechanism for financing research.”

Yet with both major parties vigorously opposing Medicare-for-All, even through a worldwide pandemic, it is unlikely that this will cause a major rethink in elite circles, at least. Nevertheless, in a year that has given the world so little to smile about, this new breakthrough is undoubtedly good news.

Feature photo | A researcher in a laboratory at the Jenner Institute in Oxford, England, works on the coronavirus vaccine developed by AstraZeneca and Oxford University. John Cairns | University of Oxford via AP

‘Your Body Is The Battlefield’ In The War On COVID & NIH, DARPA Focus On Digital/Predictive Health

Where Is #MeToo when All of Us Are About to Be Raped by Forced Vaccination?