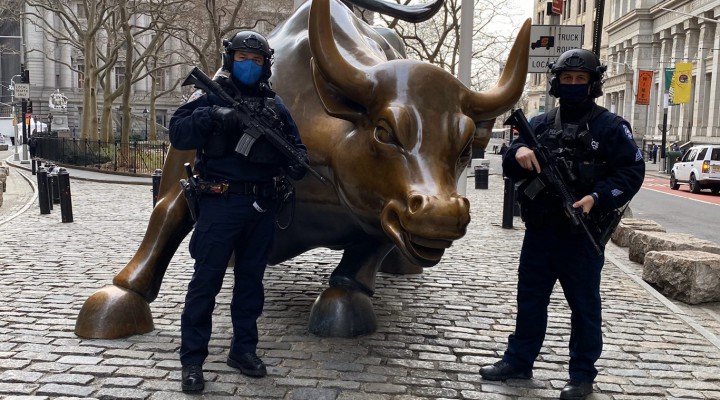 The NYPD decision comes amid a growing online movement aimed at punishing wealthy hedge funds who have spent enormous sums betting on the demise of a number of companies.

MPN- The Charging Bull statue in Manhattan’s Financial District has become the sight of protests amid a wider financial rebellion happening online. On Friday, a handful of activists were seen in Bowling Green Park, posing with the bull, and holding signs that said “Tax Wall Street Trades.” A thin band of tape was also placed on the statue’s head and rear end, featuring slogans like “Hold the line” and “WSB” — both allusions to the GameStop insurrection against hedge funds organized by Reddit’s “Wall Street Bets” community. A similar fate befell the new Fearless Girl statue, which faces the New York Stock Exchange building. Both the bull and the girl are meant to symbolize the power, bravery and daring of the city’s financial traders.

In response, the New York Police Department (NYPD) mobilized its anti-terrorism unit, sending masked, blad clad police officers wearing armor and carrying assault rifles to protect and secure the area. “The Stock Market has had an interesting week to say the least. We are happy to report that the Wall Street Charging Bull is secure and continues to preside over Bowling Green for the foreseeable future,” it announced. The bull was covered in a blue tarp to prevent further vandalism.

this seems like a totally normal response to *checks notes* some tape pic.twitter.com/0VbnG8QW0n

The decision to deploy counter-terrorism officers on the streets of Manhattan was not well appreciated, at least judging by replies left on the unit’s official social media pages. “Perfect example of how police exist to protect private property and not people,” was the highest rated response. Other popular replies included, “You brought out the automatic rifles and body armor… for tape,” “Good ad for defunding the police right here,” and, “If this was a shot in a movie, I’d think it was too on the nose.”

The NYPD decision comes amid a growing movement aimed at punishing wealthy hedge funds who have spent enormous sums betting on the demise of a number of companies, including video games retailer GameStop, movie theater chain AMC and Finnish telecommunications company Nokia. Organized primarily on Reddit community /r/WallStreetBets, small scale investors have caused GameStop’s stock to rise from $35 per share two weeks ago to over $300 on Friday, in the process causing hedge funds to lose an estimated $19 billion.

In response to mounting losses, ironically-named trading app Robinhood banned the purchase of a number of well-performing stocks, including GameStop, and even forced users to sell their shares against their will. Messaging platform Discord shut down the Wall Street Bets server, while Google wiped almost 100,000 negative reviews of Robinhood from its app store, restoring its good rating.

The NYPD has been the subject of considerable scrutiny of late due to its heavy-handed tactics. During the summer, its vehicles were caught plowing through dozens of people demonstrating in support of George Floyd, ironically protesting against police brutality.

In June, the NYPD brutalized 32-year-old African-American hospital worker Rayne Valentine as he was leaving his job, kicking and beating his head in until he lay unmoving in the fetal position. Valentine had to go back to the same hospital he just left for treatment, his co-workers putting seven staples in his head and attempting to stop the bleeding. Valentine suggested that his attackers may have only stopped after they noticed his bloodied hospital identification. The organization also deployed a number of fake yellow taxi cabs in order to arrest protestors breaking the city’s curfew laws.

Going further back, the department’s behavior during the Occupy Wall Street protests of 2011 is often cited as a reason for the movement’s growth, with scenes of mistreatment of peaceful demonstrators, such as officer Anthony Bologna wantonly pepper-spraying sitting protestors, or the mass arrest of more than 700 people on the Brooklyn Bridge triggering outrage nationwide. The NYPD killing of Eric Garner in 2014 also helped spur the movement for black lives.

With more than 50,000 uniformed officers, the NYPD dwarfs the police departments of other cities in its sheer size. It also boasts double the police per capita than urban centers like Phoenix and Dallas. The department’s $6 billion annual budget is larger than the total GDP of over 40 countries and eats into the far smaller budgets for underfunded essential services. Current New York City Mayor Bill de Blasio has overseen the great expansion of the force, both in budget and in number. Thus, while the city appears unable to help poorer residents survive a pandemic, there still seems to be ample resources to protect the interests and the property of Wall Street, including an expanding and ever-more militarized police force.