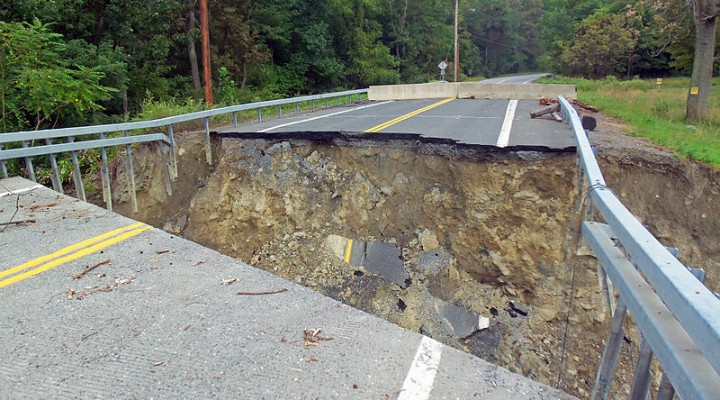 New York Times columnist Paul Krugman (Twitter, 12/29/20) described a $2,000 Covid relief check as “divisive,” even though 75% of Americans (and 72% of Republicans) wanted the government to prioritize another universal payment. All too often, words such as “divisive,” “contentious” or “controversial” are used merely as media codewords meaning “ideas unpopular with the ruling elite”—what FAIR calls “not journalistically viable.” 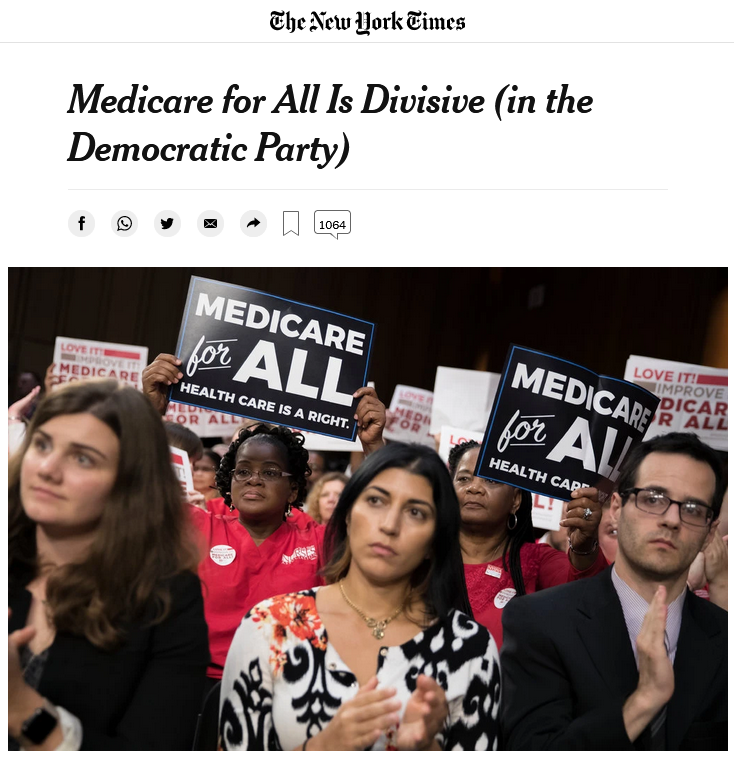 “The idea of Medicare for All is immensely contentious,” says the New York Times (3/18/19).

Medicare for All is a prime example of this. At least since the issue began receiving national media attention as a result of Sen. Bernie Sanders’ 2016 presidential campaign, a majority of Americans have supported some form of national, publicly funded healthcare system. Some polls have found nearly three in four support the idea, including a majority of Republican voters. Yet corporate media continue to disparage universal public health insurance, labeling it “divisive” (Axios, 2/14/20), “controversial” (Christian Science Monitor, 6/4/19; Time, 10/24/19; New York Times, 1/1/20) or “politically perilous” (Associated Press, 3/25/19).

In an article entitled “Medicare for All Is Divisive (in the Democratic Party),” the New York Times (3/18/19) described giving people free healthcare “immensely contentious,” framing it as a risky and enormously expensive gamble that centrists in swing districts could ill afford to take coming up to an election. The reality, of course, was the opposite: Every single Democratic incumbent in a swing district who endorsed Medicare for All won reelection in 2020. The same cannot be said for those that did not endorse it.

There can be few policies that would so directly and immediately benefit so many Americans as raising the minimum wage to $15 (though that’s still not enough to afford rent in most US states). Forty percent of the country told Reuters/Ipsos pollsters in February that they or someone close to them would be positively impacted by such a change. The same poll found that supporters of raising the minimum wage outnumbered opponents by 25 percentage points. Regardless, increasing it is often described as “divisive” (e.g., Bloomberg, 10/2/17; Politico, 3/16/21; Delaware News Journal, 3/10/21). 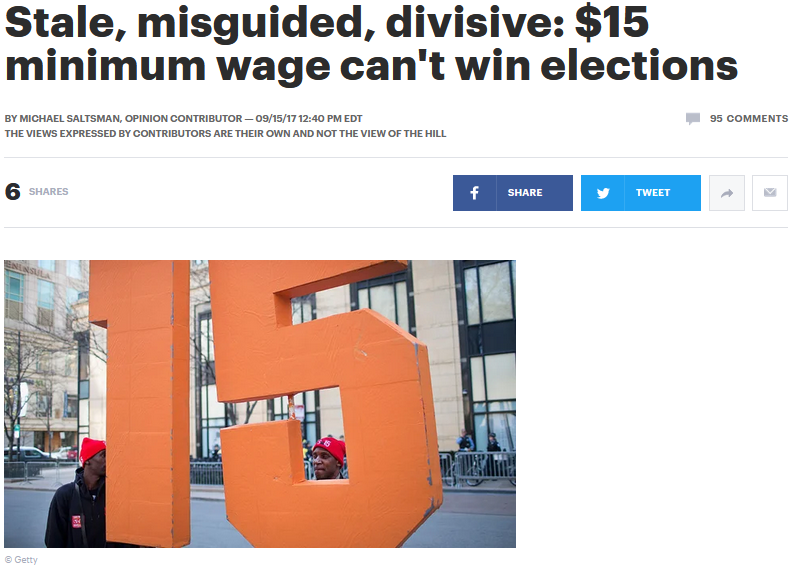 The leader of a corporate front group (The Hill, 9/15/17) mocked labor leaders for “attempting turn the minimum wage into a major election issue” that would spark “a massive voter engagement drive for the 2018 election cycle.”

The Hill, for instance, published an opinion piece (9/15/17) claiming support for a living wage was “stale, misguided and divisive.” While $15 per hour sounds good on paper to people “not informed of the consequences,” the policy is a big vote loser, insisted Michael Saltsman of the corporate-funded Employment Policies Institute.

Saltsman was the brains behind crude propaganda campaigns against raising the minimum wage in California; he put up a billboard in  San Francisco threatening workers they would be replaced by iPads if they demanded fairer remuneration for their work. He was  described by Bay Area-based journalist Paul Bradley Carr (Pando, 7/21/14) as “the asshole behind San Francisco’s most assholeish billboard.” The “divisive” measure was approved by city voters with 77% support (CNN Money, 11/5/14).

The Green New Deal—a major jobs program that would transition the US to a clean energy economy, which has been described as the only coherent plan to save the US from climate breakdown—is also constantly written off as too contentious to work (Reuters, 3/21/19; Atlantic, 6/12/19). CNBC (3/12/19), for instance, reported on the “story” that fossil fuel executives in Houston dismissed the plan pushed by Sanders, Rep. Alexandria Ocasio-Cortez and co. as “unrealistic, unworkable and politically divisive.” Instead, they propose rather nebulous “market-oriented solutions” to the crisis.

Thank you for that extraordinary insight, CNBC! Perhaps you could next enlighten us on what Wall Street traders think of the idea of pursuing criminal investigations into their behavior in 2008? (Giving space to billionaire energy bosses to trash environmentalists is something of a tradition at CNBC—FAIR.org, 2/3/20).

Meanwhile, one Guardian article (12/29/18) noted that 81% of American voters back the Green New Deal plan, yet still managed to present it as a “divisive” proposal that “lacks key political support,” thereby tacitly underlining how little the will of the people matters to policymakers—or elite media. 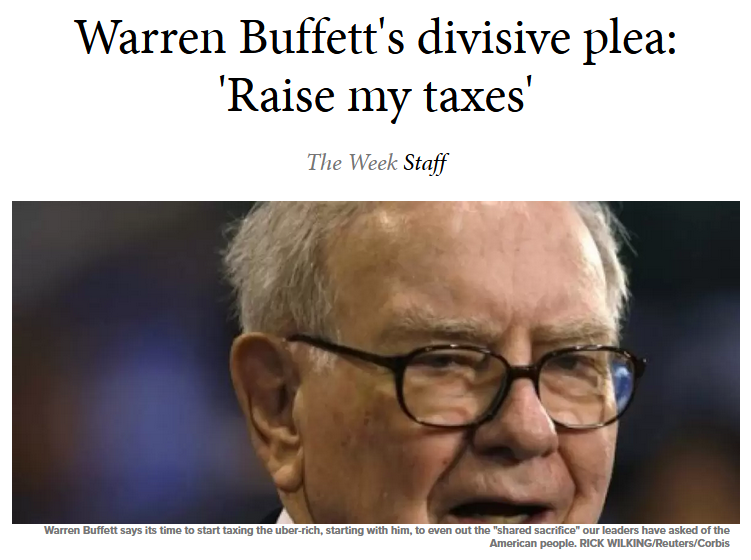 The range of opinion on Warren Buffet’s proposal to tax the rich published by The Week (8/15/11) went from “many lower or middle class voters oppose all tax hikes” to “automatic deal-breaker” to ” terribly inefficient and unfair.”

The wealth of the super-rich has skyrocketed in recent years, with the planet’s billionaires increasing their fortunes by 55% since the beginning of lockdown measures last March. A large majority of Americans, including more than half of Republicans, support increasing taxes on the rich. Despite this, a modest wealth tax, like the one put forward by Massachusetts Sen. Elizabeth Warren—2% on those with more than $50 million, and 3% on fortunes larger than $1 billion—is consistently undermined as too divisive to work (FiveThirtyEight, 10/28/19; Bloomberg, 3/1/21).

Writing in the Washington Post (2/5/19), columnist Steven Pearlstein dismissed the left’s ideas on taxing the wealthy, free healthcare and a Green New Deal as fringe, flawed and divisive. Even when some billionaires themselves were asking to be taxed more, The Week (8/15/11) still described the idea as “divisive” in a headline. Are we really to believe that there is such a fervor among the public against the richest people in the world becoming minutely less wealthy?

All of the populist, pro-working class policies detailed above enjoy significant majority support with the public. They are not, by the dictionary definition, controversial. And yet time and time again, they are attacked as too contentious or divisive to work.

While billionaire-owned media outlets could simply come out and say, “We oppose these proposals for ideological reasons,” a much better rhetorical tactic is to present themselves as neutral observers, merely concerned about the practicality of such legislation.

The next time you hear your favorite political proposals being labeled as too “divisive,” “contentious” or “polarizing” to work, check the polls first. You might be being sold a bill of goods by dishonest commentators trying to pour cold water on a progressive fire.