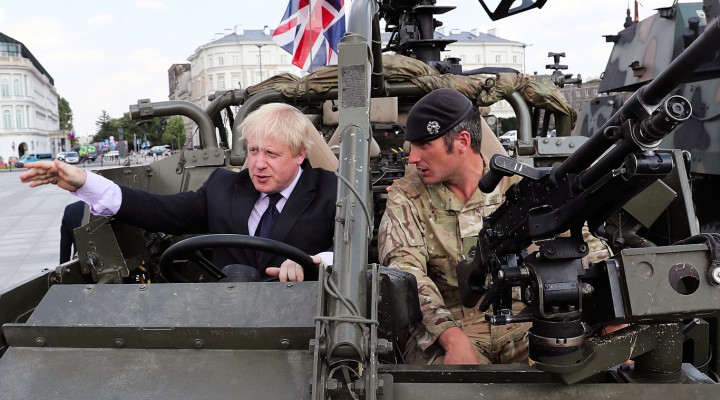 Almost every one of Britain’s top arms producers saw large spikes in their share price immediately following the news that Boris Johnson was to become the next Prime Minister.

Almost every one of Britain’s top arms producers saw large spikes in their share price immediately following the news that Boris Johnson was to become the next Prime Minister and Jeremy Corbyn was going to stand down as leader of the Labour Party.

Great Britain is the world’s sixth-leading arms exporter, and nine British companies make the list of the 100 largest military contractors in the world. With the exception of Rolls Royce, which is suffering a sustained, long term decline in value, every one saw significant increases in value on Friday. Military engineering multinational Babcock, for example, saw its share price rise from £599 to £657 in the first hour of trading after the news of the Tory victory. There were also spikes for the likes of BAE Systems, Cobham, Serco, QinetiQ and Chemring and Ultra Electronics. A chart shows the surge in Babcock’s stock value after the UK election results were announced. Source | Financial Times

Polls had shown that Labour’s Jeremy Corbyn, a lifelong anti-war campaigner who organized and led the Iraq War protests – the largest ever political demonstration in the country’s history – was closing the gap on Johnson. In the end, however, the Conservatives managed to win 365 of 650 total seats in parliament, and Labour slumped to just 203, 59 fewer than in 2017. According to the Stockholm International Peace Research Institute (SIPRI), Saudi Arabia is by far Britain’s most important arms customer, responsible for 49 percent of total weapons purchases, buoying the booming industry. Thus, the UK has been tacitly allied to the Saudi-led coalition and its destruction of Yemen.

Yemen is suffering through the most pressing humanitarian catastrophe in the world. The United Nations estimates 24 million Yemenis are in desperate need of assistance as the country is racked by famine, disease and war. 7.4 million need treatment for acute malnutrition and a further 18 million people lack access to safe drinking water. British weapons have sustained the onslaught even as other countries, such as Germany, have halted sales. MintPress News is one of very few outlets covering the near-genocide from inside the country.

Corbyn had promised to put an end to UK weapons sales to Saudi Arabia and work to end the war there, effectively signaling the end of the relationship. Meanwhile, the Conservatives have gone out of their way to support the Saudi government, breaching multiple court orders to stop selling arms. Globally, weapons sales are up ten percent from previous years, according to SIPRI. The United States and Russia continue to dominate the global arms trade.

While many claimed that Johnson’s victory was a dark day for minorities in the UK, the Tory majority was a cause for celebration for shareholders in major banks. Lloyds TSB, for example, saw its share price spike by over 20 percent – from £61.15 to £73.66 – in the first hour of trading after the election results, and its value has been maintained since.

Corbyn’s plans to nationalize broad swaths of the British economy had worried many in the world of finance, who feared their industry could be next. On the other hand, the Conservatives have cultivated an image of being the party of the big banks. Former Chancellor George Osborne had gone so far as to take the European Union to court, spending UK public money to challenge the organization’s caps on maximum bonuses banks could pay their executives. This was despite the fact that the vast majority of the country supported European regulations.

The block on upper management bonuses was one of the major sources of anti-EU resentment on the right. The UK Independence Party (UKIP) of Nigel Farage, himself an ex-banker, is largely funded by one man: Aaron Banks. Banks was an investor and businessman and sunk huge amounts of money into a long and ultimately successful campaign to convince the UK to leave the EU.

The spike in weapons makers and banks’ share prices highlights the stakes that were at play in the December election. While many on the left, working-class people and racial and ethnic minorities are devastated by the prospect of five more years of Tory rule, at least the military-industrial complex is happy.