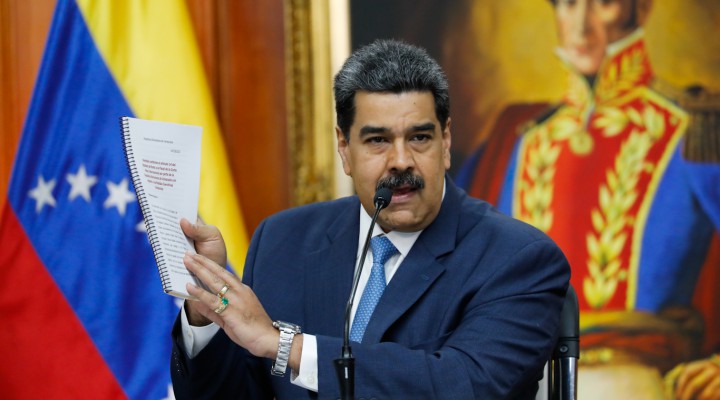 “I wholeheartedly ask you not to allow your country to be dragged once again into another unending conflict, another Vietnam, another Iraq, but this time, closer to home.”

MPN– Venezuelan President Nicolas Maduro released a letter addressed to the American people, urging them to oppose military intervention in South America and instead push the Trump administration to concentrate on tackling the COVID-19 pandemic raging across the United States. “It is clear that the Trump Administration is creating a smokescreen to cloud the improvised and erratic handling of the pandemic in the United States,” he wrote.

From the beginning, Donald Trump downplayed and even denied it, the same way he has done with climate change. Today, the crisis in the United States aggravates simply because, despite having the resources, he is not willing to transform the healthcare system to prioritize full care for the population instead of profit-based private medicine, insurance companies and pharmaceutical industry.”

As the United States has shot into the “lead” on the coronavirus table with over 337,000 confirmed cases and nearly 10,000 reported deaths already, public opinion on Trump’s leadership has begun to sour.

Amidst our relentless struggle against #Covid_19, I’ve sent a letter to the people of the U.S. with a message of solidarity and a call for Peace. No supremacist aggression can break our fraternal ties. pic.twitter.com/5GCPs8JjcG

“I call upon the people of the United States to stop to this madness, to hold your officials accountable and to force them to focus their attention and their resources on urgently addressing the pandemic,” Maduro urged, asking the U.S. government to end its sanctions and blockade of the country that have prevented lifesaving medical supplies from entering Venezuela for many years.

An American United Nations Special Rapporteur who visited Venezuela estimated that American sanctions have killed over 100,000 people, describing them as akin to a medieval siege and declaring Trump guilty of “crimes against humanity.”

This weekend the Trump administration ordered the navy towards the South American country. In response, Maduro mobilized defensive forces intended to repel any aggression.

I wholeheartedly ask you not to allow your country to be dragged once again into another unending conflict, another Vietnam, another Iraq, but this time, closer to home,” the president wrote. “We in Venezuela do not want an armed conflict in our region. We want brotherly relations of cooperation, exchange and respect.”

Since the election of Hugo Chavez in 1998, the United States has had a very poor relationship with Venezuela. In 2002, it sponsored and supported a briefly successful coup against Chavez, whom Bush’s Secretary of Defense Donald Rumsfeld described as a new Hitler. Chavez, however, remained extremely popular with the country throughout; a 2017 poll found 79 percent of Venezuelans chose him as the country’s most well liked president.

For more than 20 years, the domestic Venezuelan opposition has been largely funded, trained and supported by Washington. Chavez’s successor Maduro was democratically elected in 2013 and again in 2018, but the United States has never accepted the results. In 2019, it recognized barely known opposition figure Juan Guaidó as the rightful president. Guaidó unsuccessfully attempted multiple times to overthrow Maduro, but could never convince more than a section of the Venezuelan public to support him. The latest domestic opinion poll puts his approval rating at 10 percent, with a 68.5 percent disapproval rating.

The latest attempt at regime change has been to formally accuse Maduro and his associates of running a massive international drug ring. On March 26, Attorney General William Barr offered a $15 million reward to anyone who could capture him and bring him to the United States. Similar rewards were offered for other senior politicians. Yet the idea that Venezuela is a major drug smuggler does not fit official U.S. documents. For example, the 2017 D.E.A. National Drug Threat Assessment Report mentions Venezuela only 12 times in 182 pages, compared to Colombia 135 times and Mexico 281 times, both close U.S. allies. The U.S. Coast Guard also produced a map illustrating drug routes to the United States, showing that the overwhelming flow begins in Pacific ports in Colombia or Ecuador, traveling north to Mexico. Venezuela was, in comparison, largely untouched.

Reports suggest that Venezuela’s response to the COVID-19 pandemic has also been far more proactive than the U.S.’ Even before any confirmed cases, Maduro declared a health emergency, canceling foreign flights and prohibiting crowds. On the day of the first case, schools, theaters, and restaurants were closed, and wearing a mask in public became mandatory. The government created a national online database and website where unwell citizens could inform authorities of their condition. Over 20,000 people who registered were immediately visited in their homes by medics. The country has reported only 159 total cases, with seven deaths.

In contrast, the U.S has over 2,000 times more confirmed cases. Thousands of Venezuelans in the U.S., between 92 and 99 percent of whom voted against Maduro in the 2013 elections, are flocking back to their country of birth in the knowledge that his response has been more reassuring than Trump’s. Maduro appeared proud of his government’s response, writing:

Fortunately, in Venezuela, we have been able to count on some advantages. We took very early measures of social distancing and amplified testing, relying on our free and public healthcare system that counts doctors throughout the country with what we call family. We also rely on the invaluable community-based organizations to help raise social awareness and support the most vulnerable sectors. The solidarity of Cuba, China, and Russia, and the support of the World Health Organization has likewise allowed us to obtain necessary medical supplies despite Donald Trump’s illegal sanctions.”

Maduro ended with an appeal to class, suggesting that it was not in the interest of the vast majority of the American people to go to war, only the political and economic elite.

The peoples of the United States and Venezuela are not as different as their lies intend us to believe,” he said. “We are peoples seeking a more just, free, and compassionate society. Let us not let the particular interests of minorities blinded by ambition to set us apart.”