HOME / WORLD / The assassination of Bin Laden was fatal for al-Qaeda, but Baghdadi’s death could breathe new life into Isis 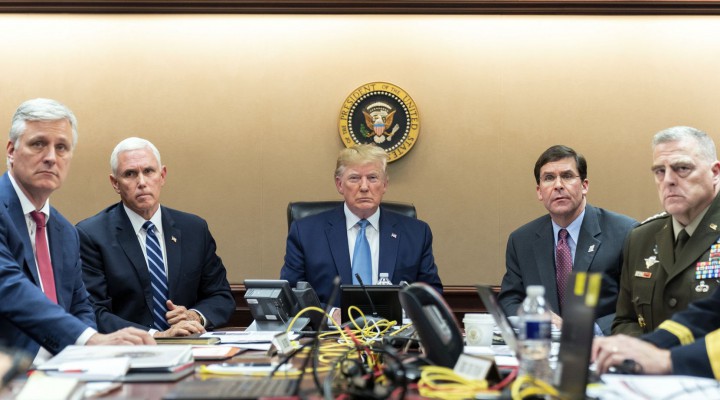 In May 2011, Osama bin Laden was killed in a US Special Forces raid on his hideout in Abbottabad, Pakistan. This dealt a fatal blow to al-Qaeda as a cohesive organisation. The Obama administration considered that to be one of its greatest achievements. But the organisation’s demise resulted in the emergence of a collection of successor groups, including two that proved to be even more potent and vicious: the Nusra Front in Syria and the Islamic State (Isis).

With this in mind, it is advisable to be wary of apparent successes like these. The same could happen again following the death of Isis leader Abu Bakr al-Baghdadi during last week’s US Special Forces raid on his hideout in northwestern Syria. He reportedly blew himself up in an escape tunnel, using the suicide belt he always kept at hand to ensure he would never be captured alive.

There have been conflicting accounts of how, precisely, Baghdadi came to meet his grisly end.

One story is that he was tracked down to an isolated house near a village north of Idlib belonging to the leader of the Hurras ash-Sham (Guardians of Syria) Front, a local Isis affiliate, after a tip-off by a defector from the group.

But doubts have been cast on this version of events, not least by the Russians. Suspicions have also been raised in the Middle East by the US’s failure to provide evidence confirming Baghdadi’s death or release images of his body. How come, sceptics and conspiracy theorists wonder, while the Americans always film everything, and had no qualms about showing us the corpses of Saddam Hussein or his sons, we never saw those of bin Laden, his son Hamza, or Baghdadi? Why were they all disposed of at sea?

Another theory is that Baghdadi’s killing may have been engineered by his own senior lieutenants, the inner circle of Isis’s original founders, known internally as The Pilgrims, who constitute the leadership of its “deep state”. They supposedly blame Baghdadi for losing control of the organisation and allowing it to disintegrate after its military defeat, and decided he had to be removed and replaced by a new leadership capable of reuniting and rebuilding it.

Unlike al-Qaeda, the caliphate proclaimed by Baghdadi in his famous sermon at Mosul’s Grand Nouri Mosque in the summer of 2015 was not centred around an individual leader. It was based on a powerful ideology, an extreme form of Wahhabis, whose uncompromising nature enhanced its appeal for alienated Islamic youth, and managed to develop branches or franchises in at least 18 countries in the Middle East, Africa and Asia. It flourished in conditions of full or partial state failure in places like Iraq, Libya, Yemen, Syria, Afghanistan the African Sahel and Egypt’s Sinai Peninsula, where the “state” established “provinces” in accordance with a strategy of expansion and co-option of existing jihadi groups.

Baghdadi can be seen as having been largely a figurehead. He did not actually run his organisation. He only ever made one public appearance, and issued just two video recordings in five years. He was completely lacking in charisma, shunned the limelight, and left the management of the organisation’s affairs to a number of lieutenants. His elimination is therefore unlikely to have the kind of major impact on Isis that bin Laden’s assassination had on al-Qaeda.

This was underlined by the speed with which Isis confirmed his death and announced the selection of a successor, named as Abu-Ibrahim al-Hashemi al-Quraish. The new leader is an Iraqi from the town of Telaafar, a former officer in Saddam Hussein’s army, with plenty of military experience gained during post-invasion insurgencies, and a penchant for covert action. Preliminary information indicates he was Baghdadi’s deputy in overall charge of IS military operations. He is also said to be as uncharismatic as his predecessor. But his name, which is presumably assumed, is significant in ideological terms. By associating his lineage with the Prophet Muhammad’s tribe (Quraish) and clan (Hashem), Isis affirms its continued self-identification as the true successor to the Prophet’s polity, standing out above all similar or rival Islamist groups.

So what can we expect next?

To start with, Isis will likely be planning revenge attacks, especially against the US and the West. Baghdadi’s devotees may be further inspired to avenge his death by its seemingly heroic manner – blowing himself up rather than face the ignominy of surrender. Their desire for revenge may well have been redoubled by President Trump’s demeaning and gloating depiction of Baghdadi as a coward who died like a dog, using terms that could hardly have been more insulting and provocative.

Meanwhile, the new leadership will intensify efforts to recruit more followers from the ranks of young Muslims worldwide, to make up for the thousands killed, injured or captured in the ferocious fighting that culminated in the destruction of Isis’s territorial state and the fall of its twin capitals in Iraq (Mosul) and Syria (Raqqa).

Ironically, being driven underground as a result of this defeat makes a rebirth of the organisation a lot easier. It has been relieved of the costly and time consuming burden of administering a large territory and population. Forced to abandon the doctrine of tamkeen (“enablement”) ,which it adopted to distinguish itself from al-Qaeda, and it can now revert to a strategy of terrorist action unencumbered by the responsibilities of state-building.

It has been provided with a golden opportunity by Trump’s decision to deploy US forces to take over Syria’s oil fields and appropriate their output. Isis could rally support from both sides of the Iraq-Syria border, where the remnants of its fighting force are still active, to mount a campaign of resistance against this occupation.

Baghdadi’s death may also set the stage for Isis to reconcile with rival jihadi outfits, such as the Nusra Front and other offshoots and remnants of al-Qaeda, and begin cooperating and coordinating actions with them. Its conflicts with these groups were partly due to personal animosity between Baghdadi and their leaders, especially the Nusra Front’s Abu-Muhammad al-Jolani. With him out of the way, these tensions could ease or be overcome entirely.

To sum up, the death of Baghdadi does not presage the end of IS. Its components remain active, not just in Iraq and Syria, but in Yemen, Afghanistan, Libya, Sinai, the Sahel, the Philippines and elsewhere. The conditions that nurtured and enabled it continue to apply, and in some cases have been exacerbated. And, unlike Bin-Laden, Baghdadi’s successors can use social media to mobilise and indoctrinate globally with a mere click of a key.

Baghdadi, the Invisible Leader of a Fake Army

0 thoughts on “The assassination of Bin Laden was fatal for al-Qaeda, but Baghdadi’s death could breathe new life into Isis”