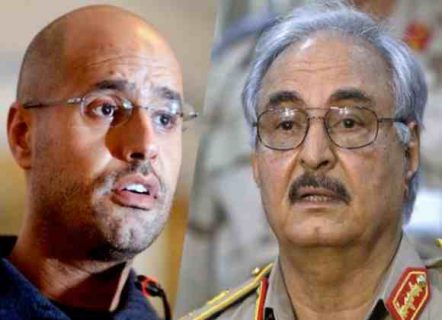 The renewed warfare in Libya is not merely between the forces of the so-called Libyan National Army (LNA) led by Khalifa Haftar and those of the internationally recognised government headed by Fayez al-Sarraj. It is also between the al-Jazeera TV channel, representing the Qatari-Turkish alliance, and the al-Arabiya channel, which supports Haftar and speaks for the four-party anti-Qatar coalition consisting of Saudi Arabia, the UAE and Egypt as well as Bahrain.

In other words, a propaganda war is raging alongside the bloody fighting on the ground in Libya. Both sides think the victor will emerge as a leader of a new and reunified country. But the complexity of the situation, and the interference of regional and international powers competing for all or part of the lucrative spoils means that no outcome will be stable.

The statements about Libya being issued these days by various countries have one thing in common. They all profess concern about the developing situation. But this pretence conceals an undeclared inclination to support Haftar and his forces’ advance on Tripoli under the misleading guise of combating terrorism.

Haftar timed his offensive very carefully after obtaining a green light from Gulf states and regional and world powers. He visited Saudi Arabia, the UAE and Egypt before firing the opening shot in his campaign to capture the capital. Russia, France and the US, for their part, make no secret of their wish to see an end to the chaos in Libya caused by Nato’s 2011 intervention, which led to regime-change and turned the country into a base for illegal migration to Europe and the re-gathering of hard-line Islamist groups.

Saudi Arabia, the UAE and Egypt have been providing Haftar and his forces with the constant military and political backing for the past seven years. This has included tanks, armoured vehicles and other sophisticated military equipment – including warplanes – as well as billions of dollars in funding.

The go-ahead for the offensive was given at a time when Qatar is under siege and Turkish President Recep Tayyep Erdogan – the Sarraj government’s key backer  — is losing popularity, with his country mired in an economic crisis which could worsen given its growing quarrel with the US over its proposed acquisition of Russian S-400 air defence missiles.

Haftar has the upper hand for now. This is not only due to the potent and sophisticated weaponry provided to him from numerous sources. It is also because he has backing from powerful tribes that used to be loyal former leader Muammar al-Qadhafi, including the Warfalla, Magarha and Obeidat. There is the talk of a power-sharing deal between Haftar and Qadhafi’s son Saif-al-Islam should the former’s mainly eastern forces succeed in taking Tripoli and assuming control of it.

They already control most of the east and south of the country and its oilfields. They even managed to overrun Tripoli’s disused International Airport briefly before being repulsed by pro-Sarraj forces. The battle for Tripoli could be decisive, determining who Libya’s future rulers will be.

The Libyan public is divided. Some back Sarraj’s government as the legitimate authority, which is supported internationally but weak in military terms. Others favour Misrata-based or Islamist groups or Haftar’s forces or others. All agree, however, on the need to end the anarchy and instability that has plagued the country and prompted up to three million of its inhabitants to flee to neighbouring countries or Europe.

It is difficult to predict the outcome of the impending battle for Tripoli if it takes place. But in the absence of any international or regional plan to halt the advance of Haftar’s forces, he would appear to have the advantage for now – especially as he has managed to combine opposites by securing both US and Russian backing simultaneously. The one certainty is that the Libyan people are set to pay a high price, yet again, in blood and lives.

0 thoughts on “Proxy War in Libya”