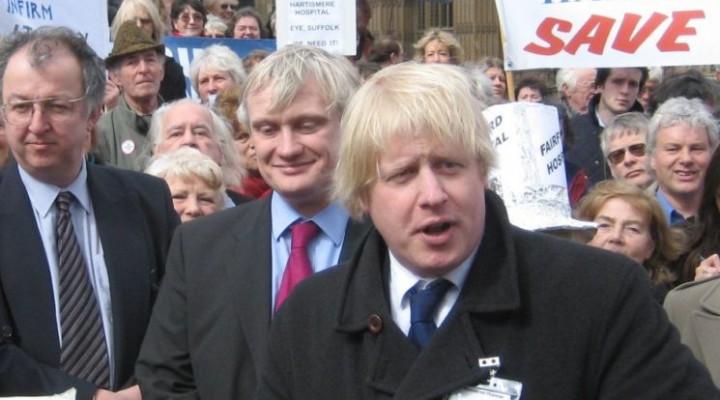 Britain’s new Prime Minister Boris Johnson has vowed to “unite the nation” and usher in a “golden age” of prosperity and technological progress.

The hardline Brexiteer-in-chief says he is going to pull Britain out of the European Union by October 31 – with or without a divorce deal with Brussels. Most likely that means a “hard Brexit” after which Britain is to become a separate nation reliant on trading with the rest of the globe under World Trade Organization rules.

Of course, that’s what hard Brexiteers like Johnson and his followers in a minority section of the Conservative party always wanted. They want Britain to be a free-trading sole entity divorced from any links to the EU, such as a transitional soft option involving some trade concessions over a period of years.

In his first parliamentary speech as new PM, Johnson declared: “Our mission is to deliver Brexit on October 31, to re-energize the United Kingdom, and to make it the greatest place on Earth.”

He talked up his premiership as the beginning of a “new golden era” and of a “fantastic new agenda for our country.”

Indeed, everyone should be encouraged to think big. But usually it is advisable to have some reasonable basis for ambition.

Johnson outlined various seeming grand improvements for British society. He said he would boost police force numbers to curb skyrocketing street crime. He announced big investment ideas for transport and communications infrastructure. And he said he would prioritize increased government spending on schools and education.

That’s all very well in theory. But notably Johnson left out much  financial detail about what exactly his government was actually going to invest, and secondly, how they were going to pay for it.

In typical Johnson fashion, his incoming speeches as the new occupant of 10 Downing Street were mostly bluster and bombast without convincing substance. This is the same politician who campaigned for Brexit in the referendum in June 2016 by claiming that money saved from ending Britain’s membership of the EU would result in £350 million per week being instead spent on the British National Health Service. That claim later turned out to be a fiction.

Johnson is a shameless waffler who has a knack for concealing his intellectual vacuity with a posh accent and upper-class elitism.

What should be alarming is the way Johnson has immediately packed his new Cabinet with hardline Conservative Brexiteers who invariably share a gung-ho neoliberal ideology on economic policy as well as hawkish foreign policy. His new foreign secretary is Dominic Raab, who like Johnson, suffers from rabid Russophobia and delusions about the Skripal saga as a Putin-ordered assassination plot.

In his bid to become new prime minister to replace the hapless Theresa May, Johnson said he was committed to raising tax breaks for the rich and to lowering corporation tax. This is the same failed economic policy that has resulted in massive inequality and poverty in countless other nations over many decades. No more so than in the US and Britain, where rising poverty levels are reversing previous historic progressive gains in those societies.

The flaw in the new British government is that it seems to be seduced by romantic notions of restoring a presumed “greatness”. For fervent British nationalists, there is a common view that the Victorian era spanning most of the 19th Century was a “golden age”. This was when Britain underwent a roaring industrial revolution and built an empire of colonies that spanned some quarter of the planet’s landmass. With pride, it was said, “the sun never sets on the British Empire”, because of the far-flung territories under London’s dominion.

The Victorian era was also notorious for social poverty in Britain, the scourge of child workers employed in factories, mines and chimneys, as the great novelist Charles Dickens documented with searing pathos.

Johnson thinks he can project a shimmering future of renaissance and success. But the contradiction is that the Brexiteer vision is based on a fundamentally backward and false reminiscence of former perceived glories.

The only way that a Brexit from Europe would work would be if British politics and economics became dramatically democratized based on the priorities of working people and their families. The neoliberalism of the EU (albeit softer than that of the US or Britain) is worthy of contempt and repudiation. It is understandable why a majority of Britons voted to leave the EU.

But what they will get under a Boris Johnson “independent” Britain is an elitist country geared to attract foreign capital at any cost with tax breaks for the rich and corporations. Public investment promises can be taken with a pinch of salt. The new hardline Conservative government under Johnson will pay for wealth incentives by hammering the wider working population with even more vicious economic austerity.

It’s not going to be pretty for Britain in the next few years. Already disturbing signs of social breakdown (homelessness, poverty, in-work misery, crumbling education and health, and crime) will become magnified as Johnson and his Neo-imperialists in government chase after their illusory plan to “Make Britain Great Again” – à la Trump.

Ironically, Johnson on his first day in office promised to “unite” the United Kingdom. Flippantly and glibly, he referred to the constituent nations of England, Scotland, Wales and Northern Ireland as the “awesome foursome”.

Nearly 60 per cent of Britons disapprove of Johnson, according to polls. Over 50 per cent of Britons repudiate his “hard Brexit plans”. The Scots are clamoring for independence more than ever. The people of Northern Ireland are alarmed by his cavalier indifference to ensure a borderless connection post-Brexit with the Republic of Ireland.