HOME / WORLD / US just piled more misery on Venezuelans already hit by sanctions & pandemic. Now they are deprived of most popular TV service 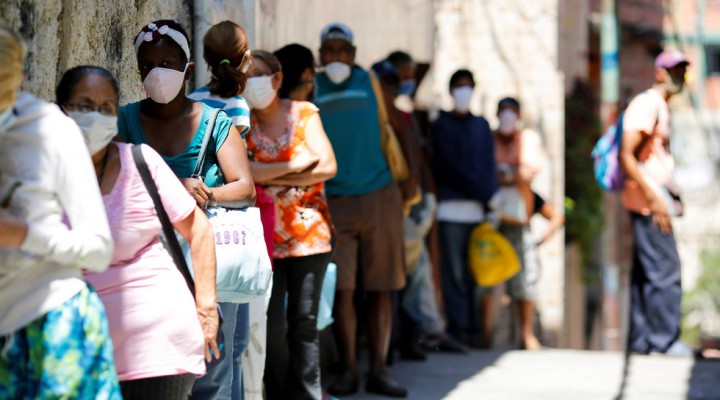 America’s meddling in Venezuela has no boundaries. After a failed coup attempt, trying to install a bogus president, and imposing crippling sanctions, will it ever be held to account?

Venezuela is back in the news again, just weeks after yet another failed coup attempt that was almost certainly backed by the US. This time, it’s the American sanctions against the country that are making the headlines – measures that caused US company AT&T to shut down satellite TV provider, DirecTV, thereby depriving Venezuelans of a number of foreign channels.

The irony, of course, is that while it’s US sanctions that are the cause of this shutdown, had it been President Nicolas Maduro who closed DirecTV, you can bet Western media headlines would be screaming about censorship of the media (although most were rather quiet when Estonia shut down Sputnik).

This impact of this latest development will be a major inconvenience for most of Venezuela’s poorest – another example of how the sanctions are not merely targeting the administration but the people themselves. US sanctions against Syria, Venezuela, Iran and a long list of other targeted nations have deprived them of access to vital medicines, medical equipment, income and more.

As I noted in a prior article, the Center for Economic and Policy Research estimated that a staggering 40,000 Venezuelans died in 2017 and 2018 due to sanctions. This shameful statistic lends weight to former UN expert Alfred de Zayas naming sanctions as a form of terrorism, “because they invariably impact, directly or indirectly, the poor and vulnerable.”

Economic sanctions are a form of terrorism, because they invariably impact, directly or indirectly, the poor and vulnerable #HandsOffVenezeula

So well done, America, for adding another layer of misery to the heap you’ve already created.

The plan to abduct Maduro

Just a couple of weeks beforehand, on May 3 and 4, Venezuelan forces had prevented 60 paramilitaries on two speedboats – including Americans – from carrying out their plan to kidnap Venezuela’s president and replace him with Juan Guaido, who the US and Canada have been attempting to install as president since early 2019.

Guaido, the self-appointed ‘interim president’, was aware of the plot, which involved a contract of $213 million according to documents that have entered the public domain. The US and Canadian authorities were most likely in the loop, too.

Guaido first announced himself as ‘interim president’ in January 2019, to the surprise of most Venezuelans and with no election. Most countries rejected this breach of Venezuela’s sovereignty, with only a smattering of Western terrorist-supporting countries that advocate regime change – and some nations that they bully – endorsing him.

A month later, there were failed Western-backed attempts to ram ‘aid trucks’ (loaded with wires and nails) through Colombia’s border with Venezuela, the goal being to vilify the government for failing to accept what was clearly not aid (and was not coming via a proper channel either).

In March, the unpopular Guaido was booed and fled from a pro-government area in Caracas, ironically with Venezuelan security protecting him from an angry crowd. In the same month, I tried to see the supposedly massive pro-opposition rallies I had heard of in the capital, but instead came across huge pro-government demonstrations.

In April, Guaido and a violent right-wing opposition leader, with the backing of the US, attempted a coup – an attempt clearly rejected by masses of Venezuelans. Fast forward to January this year and Guaido failed to be re-elected as president of the country’s National Assembly.

In spite of the absurd amount of backing Guaido has received from Western governments, it seems even some opposition within Venezuela don’t want him, and would prefer to return to dialogue with Maduro’s government.

Perhaps this was down to Guaido staffers’ alleged involvement in  embezzling ‘humanitarian aid’ funds. Photos taken with Colombian drug traffickers and paramilitary leaders probably didn’t help his cause, either.

After so many Guaido false starts and flops, and their failure to bring him an iota of legitimacy, surely it’s time for the US and Canadian administrations to accept they are flogging a dead horse?

On Tuesday, Venezuela’s Ambassador to the United Nations Samuel Moncada, tweeted: “May 20 at 3:00 pm, the UN Security Council will debate the situation in Venezuela. The meeting was requested by Russia after the terrorist armed attack carried out from Colombia on May 3. We will denounce to the world the aggression against our people.”

While I do of course support Venezuela’s desire to denounce the attempted coup, and the bloodshed that could have prevailed – including of civilians – had the paramilitaries been successful, forgive me for being cynical that justice will prevail.

After all, history has shown that nothing is done when the US and allies commit war crimes in Syria. Likewise, they have never been held accountable by the UN for what they did in Iraq. And what about the war crimes of Israel against Palestinian civilians, and the Saudis against the Yemenis?

Sadly, I don’t have an answer as to what’s a better option than attempts for justice and accountability via the UN.

But I know this much: this won’t be the last failed attempt to overthrow Venezuela’s government, and it won’t be the last time the country and its allies have to condemn immoral and illegal US and Canadian acts.

So vile are these governments that even now, while the world is focused on dealing with Covid-19, they are scheming to bring more misery to the people of Venezuela. They should hang their heads in shame, but they’ve got none.

0 thoughts on “US just piled more misery on Venezuelans already hit by sanctions & pandemic. Now they are deprived of most popular TV service”