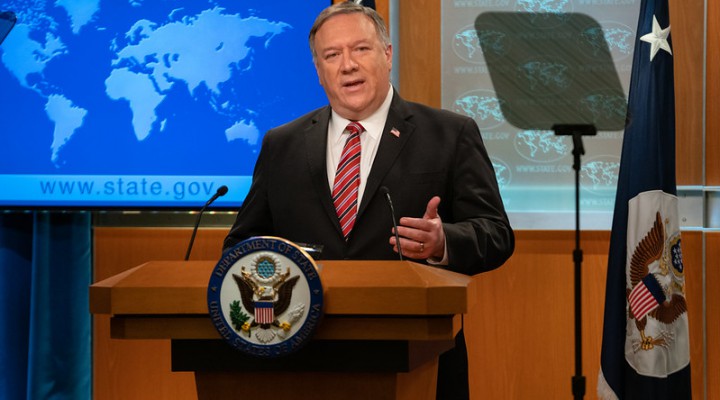 “The arrogance and cruelty of the Trump administration know no limits” – Amid pandemic, Pompeo is trying to overthrow Venezuela

Secretary of State Mike Pompeo’s latest attempt to inflict maximum pain and misery on Washington’s enemies has been to attempt to put a stop to Venezuela and Iran – two sovereign nations – trading with each other.

“Maduro’s thugs looted nine tons of gold bars and sent it to the Iranian regime. The world’s leading thieves are partnering with the world’s leading state sponsor of terror. The greatest victims are the Venezuelan and Iranian people,” he tweeted out Saturday, having earlier told reporters that “these flights [between the two nations] must stop and countries should do their part to deny overflights just as many have already denied landing rights to this sanctioned airline.”

If true, it is certainly worrying that the South American nation is resorting to using its gold reserves. Both nations rely on oil for income, a commodity for which demand has suddenly collapsed. However, calling democratically-elected officials “thugs” and “thieves” is pretty rich, especially coming from a government that has been compulsively confiscating, stealing and hijacking shipments of lifesaving medical equipment during a global pandemic, from nations rich and poor alike.

The little coverage of Pompeo’s sanctions – illegal under OAS and international law – has presented Venezuela as a “pariah” on the world stage and US-backed self-declared president Juan Guaidó as a legitimate and popular figure. In fact, it is the US that is the pariah internationally; the UN Human Rights Council formally condemning Pompeo’s sanctions, claiming they “disproportionately affect the poor and most vulnerable,” called on all states to break them and even broached the subject of reparations the US should pay to Venezuela.  Alfred de Zayas, a Swiss-American UN rapporteur who visited the country, estimated over 100,000 Venezuelans have died because of US actions, accusing the Trump administration of “crimes against humanity.” Meanwhile, Guaidó, whose approval rating stands at 10 percent nationally, has been pushed out of his own political party and appears unable to travel anywhere in the country without an enraged crowd of citizens opposing his every move. Guaidó’s latest attempt to overthrow the government on Friday went so poorly that it was barely noticed, even inside Venezuela.

Moreover, the idea that the elected government of a sovereign nation using its gold reserves in a time of crisis represents “looting” is especially notable, seeing as Pompeo himself ordered the United Kingdom to confiscate $1.2 billion worth of Venezuelan gold in the Bank of England last year, sparking a major diplomatic incident.

The State Department is also investigating two large Mexican firms for the heinous crime of trading with their neighbor. An agreement signed between the parties exchanges Venezuelan oil for Mexican food. If found guilty, the firms will likely have all their US assets frozen and be subject to arrest and jailing in the US. Latin American Perspectives, a flagship academic journal of regional specialists, was outraged at Pompeo’s actions; “What right does Washington have to veto a transaction involving two sovereign nations? Never in non-wartime history has the United States played such an activist role in forcing other nations to comply with US sanctions – doubly outrageous given the current pandemic crisis. The arrogance and cruelty of the Trump administration know no limits,” they wrote.

Sanctions are an act of war; their point is to cripple and devastate any state failing to bow to US hegemony. They are simply an alternative method to bombings, having the added effect of scaring any international actors or businesses into complying with them for fear of reprisals.

Iran is under a similar threat, with states unwilling even to donate medical equipment during a pandemic. Eventually, the World Health Organization had to step in to directly supply the Islamic Republic. Hawks in Washington were salivating at the prospect of the regime change amid the pandemic in March. Yet that idea seems a rather distant prospect now, as authorities have fought back capably against the virus, effectively managing to flatten the country’s curve. From a high of 3,186 new cases on March 30, infections have reduced to only 800 per day by early May.

Likewise in Venezuela, the government has proven far more competent than the Trump administration at handling the COVID–19 crisis. The country has registered only 345 positive cases and ten total deaths so far, despite testing more than any other South American nation. This was due in no small part down to swift action taken by the government. Even before their first positive test, President Maduro had declared a health emergency. Upon news of the first positive test, the government canceled classes, closed public places like restaurants and bars and organized a huge online database where citizens could inform authorities if they felt unwell. Medical teams visited tens of thousands of people in their own homes, distributing advice and test kits. Unlike in the US, all rent and utility bills have been suspended for the duration of the crisis, and Maduro has declared it illegal to fire workers during the pandemic.

It should not go unnoticed that countries like Venezuela, China, Vietnam and others that have not completely bought into the US-backed neoliberal system of governance are faring distinctly better than those states that worship the free market and detest big government. Yet Pompeo’s latest actions, attempting to stop Venezuela and Iran trading with each other during a pandemic, are a clear indication that this has nothing to do with justice and everything to do with punishing some of the only states not fully under the control of the Washington-led neoliberal order. Just as with Vietnam in the 1970s, Nicaragua in the 1980s and Cuba in the 1990s, the US is using its economic and political power to try to crush the “threat of a good example:” an idea that it worries could spread around the world as fast as the coronavirus.

*(Top image: U.S. Secretary of State Michael R. Pompeo delivers remarks to the media in the Press Briefing Room, at the Department of State in Washington, D.C., on April 29, 2020. Credit: State Department Photo by Ronny Przysucha)

0 thoughts on “Mike Pompeo Is Trying to Torture Venezuela Again”