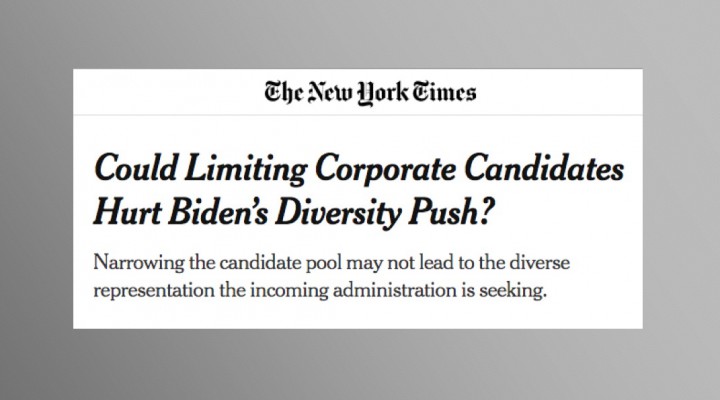 There has never been a better time to be a woman, minority or member of the LGBT community who works in the DC establishment and thinks the poor should be made into pet food.

The New York Times has published an article titled “Could Limiting Corporate Candidates Hurt Biden’s Diversity Push?”, for the benefit of all those normal everyday readers who’ve been lying awake at night wondering if limiting corporate candidates might hurt Biden’s diversity push.

The article’s authors warn against the nonexistent, completely imaginary threat of the next presidential administration rejecting corporatists for cabinet positions to appease the Democratic Party’s progressive wing, claiming that doing so would be “narrowing the candidate pool” in a way that hurts Biden’s stated aim of creating an administration that is as diverse as America. Because apparently executive positions in the corporate and financial sector are the only place you can find ethnic minorities in America.

“Groups from the far left throw out edicts, but these don’t reflect the realities of the American experience or inequality, the racial wealth gap, and may prove counterproductive to diversify the administration and to implement policies that work for all Americans,” NYT is told by a member of the influential DC lobbying firm Mehlman Castagnetti.

The New York Times just published an article insinuating that the government can only find qualified people of color on Wall Street, but not elsewhere https://t.co/1wmeGX85yf

The New York Times is warning of the pressing danger of the Biden administration conceding too much to “the far left” at a time when progressive politicians have reportedly already been ruled out as candidates for cabinet positions due to concerns of appearing to be too far left, and when members of the Biden camp are already waving off demands from progressives using the phrase “we don’t negotiate with terrorists“.

Vox has also put out an article celebrating diversity without regard to policies or behavior titled “President-elect Joe Biden’s transition team is one of the most diverse ever“, subtitled “Biden wants his administration to ‘look like America.’ His transition team is a start.”

Real diversity in any government is of course important. But what you don’t see Vox reporting on is the fact that Biden’s transition and advisory teams are packed to the gills with corporate cronies and war whores, and that the women he’s eyeing for key foreign policy positions are as murderous and depraved as any man anywhere on earth. They might be diverse in gender, skin color and sexual orientation, but in terms of bloodshed, exploitation and oppression they couldn’t be more homogeneous. They are all devout acolytes of the murderous, imperialist, oligarchic religion that is the mainstream consensus of the US political/media class.

But that’s all you’re ever going to get out of the Democratic establishment. Taking away power from the warmongers and plutocrats in any way, shape or form has been completely ruled out as a possibility, so all they have to offer in terms of “progress” is giving prominent positions to those few women, minorities and LGBT individuals who happen to be fine with choking people to death with neoliberal austerity at home and dropping cluster munitions on children abroad. That’s what “progress” looks like in a power establishment that is built on a foundation of violence, oppression and theft.

To Be A Rich And Famous Journalist: Notes From The Edge Of The Narrative Matrix