Returning Syrian Refugees Were Fleeing US Proxy War, Not “Assad” 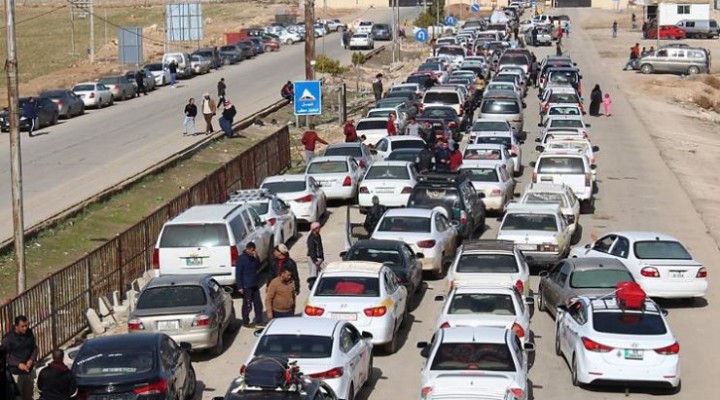 A recent BBC segment titled, “The Syrians returning home after years of fleeing war,” contradicted 8 years of the British state media’s narratives regarding the war in Syria.

A synopsis of the short BBC video segment would read:

After years of people fleeing Syria and its civil war, there are now long queues to enter the country each day. Jordan opened its Jaber border crossing last October after Syrian government troops defeated rebels who had controlled the other side.

Now several thousand people pass through each day. They include small-scale merchants reviving cross-border trade and returning Syrian refugees who hope to rebuild their lives.

Huge numbers of Syrians have already returned to Syria – specifically to areas government forces have cleared of Western-armed and backed terrorists. This includes Aleppo, Homs, and Daraa.

What the BBC Has Previously Claimed

Viewers and readers who invested trust in the BBC’s narratives over the past 8 years will be shocked to hear thousands of Syrians crowding the Jordanian-Syrian border daily to return to the war-ravaged nation.

The BBC has insisted for 8 years, millions of refugees had fled Syria to escape the nation’s “brutal dictator” Syrian President Bashar Al Assad – accused of “gassing his own people,” raining down “barrel bombs” that were both crude and “indiscriminate” but also paradoxically capable of pinpointing elementary schools and children’s hospitals, and whose “Shabiha” death squads lurked around every corner.

In 2016, a BBC article titled, “Syria conflict: Aleppo bombing shuts largest hospital,” uncritically repeated claims made by US-funded fronts operating in Aleppo during security operations to clear it of terrorists.

The BBC would eagerly report:

Russian and Syrian air raids on the rebel-held eastern half of the city of Aleppo have forced the closure of the largest hospital in the area and killed two people, a medical charity says.

The Syrian American Medical Society, which supports the hospital, said it had been struck by barrel bombs.

The BBC – along with the rest of the Western media – have depicted bombs used by the Syrian military as “barrel bombs,” claiming that because of their crude construction, they could not be aimed and therefore were “indiscriminate” in nature.

The barrel bomb is essentially a large, home-made incendiary device. An oil barrel or similar cylindrical container filled with petrol, nails or other crude shrapnel, along with explosives. With an appropriate fuse, they are simply rolled out of a helicopter.

The article would also claim such “barrel bombs” were, “in no sense accurate,” except of course – when they needed to be accurate for the sake of war propaganda – such as allegedly pinpointing US-funded “hospitals” in terrorist-held Aleppo.

A 2017 BBC article titled, “Syria chemical ‘attack’: What we know,” would claim:

More than 80 people were killed in a suspected chemical attack on the rebel-held town of Khan Sheikhoun in north-western Syria on 4 April.

Hundreds suffered symptoms consistent with reaction to a nerve agent after what the opposition and Western powers said was a Syrian government air strike on the area.

The report – of course – was based entirely on “witness” accounts, with OPCW inspectors unable to investigate the site due to the fact Khan Sheikhoun was – and still is – under Al Qaeda occupation. The BBC article intentionally omits that “samples” the OPCW examined lacked any verifiable chain of custody. In other words – the samples could have come from anywhere, including labs where they were likely fabricated.

Why would people – enjoying refugee status in neighboring countries and even in Europe, risk returning to Syria where “brutal dictator” Bashar Al Assad not only still remains in power – but has decisively defeated his opponents through the use of “barrel bombs,” “chemical weapons,” and other forms of indescribable brutality?

The answer is simple – refugees were fleeing the US-backed war and the terrorists it had armed to divide and destroy the country – not the Syrian government. The vast majority of Syria’s displaced remained inside Syria – and simply moved into areas under government protection. Now with many other areas of the country having security restored by government forces with Russian and Iranian backing – hundreds of thousands more are returning from abroad, including from Europe – according to the BBC itself.

Great effort had been put into misrepresenting the refugee crisis the Syrian conflict triggered – specifically because the specifics of the crisis clearly revealed who Syrians were really fleeing and why. Analysis of Syria’s internally displaced refugees was intentionally and systematically omitted by the BBC and other Western media organizations in their reports over the years to obfuscate the fact refugees were fleeing militants, and voluntarily returning once militants were pushed out of various regions across Syria.

When the preferred narrative becomes unsustainable, media manage this by switching to reporting as if for years they hadn’t suggested opposite. Also, UK govt (and BBC) know that UK will again have relations with Assad, which continuing to demonise him may make difficult to sell.

And of course – the BBC knows that any viewer or reader still investing trust in its daily and extensive propaganda efforts – will unlikely notice the sudden, dramatic shift in narrative regarding Syria.

BBC correspondents will claim that their past articles intentionally framing Syrian President Assad as a “madman” “gassing his own people” and raining “barrel bombs” on their heads were “balanced” because in the last paragraph, brief and marginalized statements from the Syrian or Russian governments refuting such accusations were also included.

A similar defense has been mounted since the 2003 US invasion of Iraq failed to turn up weapons of mass destruction after media organizations like the BBC assured the public of the necessity of that war.

The BBC has all but admitted to its 8 years of war propaganda aimed at the destruction of Syria. The very refugees it now reports are returning to Syria suffered the fate they have specifically because of the inability of media organizations like the BBC to honestly inform the public. The cost of the Syrian war helps remind the public why during the Nuremberg trials following World War 2, war propagandists were sent to the gallows alongside the trigger-pullers their lies helped enable.

While the BBC still enjoys vast amounts of impunity with no likelihood in the foreseeable future of ever being held accountable for its actions – it should be remembered at all times that the BBC is in the business of propaganda – and especially war propaganda – not “news.” This fact should be kept in mind whether its correspondents are covering the Middle East, South America, or Southeast Asia.

How the West Weaponizes Refugees it Creates

0 thoughts on “Returning Syrian Refugees Were Fleeing US Proxy War, Not “Assad””