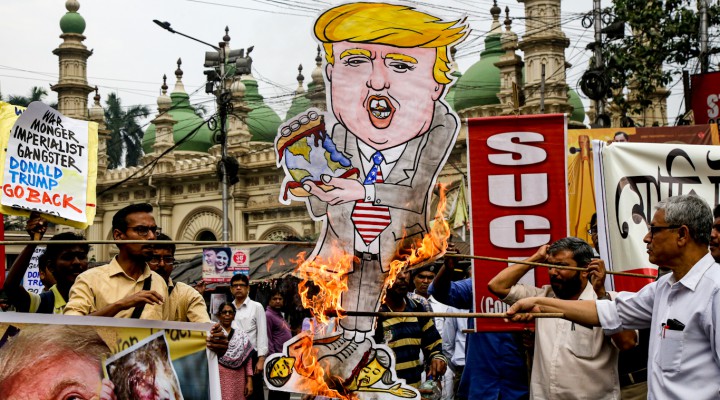 India is one of the few countries in the world where Trump has a high approval rating, but that didn’t stop thousands from taking to the streets to protest his visit.

MPN– President Trump arrived in India today for an official state visit with Prime Minister Narendra Modi. He is hoping to close a series of huge arms and trade deals between the two nations, including $2.6 billion worth of Lockheed Martin aircraft, in the country’s effort to arm amid increasing tensions with its neighbor Pakistan. Other potential purchases include missiles and air defense systems that will take the number to over $3 billion. There could be far more purchases in the future as the country is the largest arms importer in the world but has traditionally relied on Russia and the Soviet Union for its military hardware, something Trump hopes to change.

Accompanying him is First Lady Melania, daughter Ivanka, son-in-law Jared Kushner, and a host of senior administration officials including Treasury Secretary Steven Mnuchin and Commerce Secretary Wilbur Ross. But as Air Force One touched down in Delhi, much of the city resembled a war zone.

Modi’s government has already banned protests and is effectively ruling the capital city under martial law due to ongoing nationwide resistance to its controversial Citizenship Amendment Act (CAA) and National Registration Council (NRC) laws. Yet that did not stop thousands gathering to express their disapproval today. As the crowds were met by police and supporters of Modi’s Bharatiya Janata Party (BJP) chanting Hindu nationalist slogans, huge fights broke out, as hundreds of people threw rocks at each other.

In the fracas a Delhi police officer, Ratan Lal, was killed with a stone to the head. A number of buildings were also set ablaze, including shops, houses and a gas station in what the police are describing as a “rampage.” One unidentified youth also began shooting into the crowds.

Newly re-elected Chief Minister of the city, Arvind Kejriwal of the Aam Aadmi Party, called for calm and condemned the violence, stating that “nobody should be allowed to orchestrate flagrations,” appearing to side with authorities. Sections of Delhi’s metro were shut down in response to the fighting.

The violence is a blow to Modi’s government, who hoped for a seamless P.R. opportunity with the world’s most powerful elected official. Nevertheless, the government had planned well and took Trump from Delhi, where Modi is relatively unpopular, to Gujurat, his home state, to address an enormous “Namaste Trump” rally at a brand new cricket stadium in Ahmedabad.

India is one of the few countries in the world where the 45th President of the United States has a high approval rating; 56 percent of the country expressed confidence in Trump according to a recent Pew report. Thousands of locals wore cardboard Trump masks and welcoming hats as the president addressed the crowd.

“You have done a great honour to our country. We will remember you forever, from this day onwards India will always hold a special place in our hearts,” Trump said to strong applause. While some of the speech fell flat, especially when he seemed to be praising India’s rival Pakistan, the applause increased to a roar when he began denouncing “radical Islamic terrorism.”

The “Namaste Trump” rally is a mirror of the “Howdy Modi” event held for the Indian Prime Minister in Houston, TX, in September, where 50,000 people came out to see the two leaders share the stage. Modi sees himself as part of the same wave of populist right-wing leaders as Trump, Benjamin Netanyahu in Israel, Boris Johnson in the U.K. and Jair Bolsonaro in Brazil. Indian intellectual Vijay Prashad described his ideology as a perfect blend of Indian fascism and hard neoliberal economics, combining Hindu nationalism with a package of privatization of state resources. Last week, a minister in Modi’s cabinet lamented that India made a mistake not expelling all of the country’s 138 million Muslims when it had the opportunity, and called for a cap on the number of children Muslims were allowed to have.

It has been Modi’s CAA and NRC laws that have proven most controversial, however. The CAA makes it easier for people fleeing persecution from India’s Muslim-majority neighbors to gain citizenship. But the policy explicitly prevents Muslims from taking advantage of the law; something critics say breaks India’s tradition of secularism.

The NRC is a new body overhauling Indian citizenship laws, requiring citizens to provide extensive documentation about themselves and their ancestors, something hundreds of millions will surely be unable to do. Without this documentation, the government is able to strip citizenship away from anyone it chooses, rendering large populations illegal overnight. The policy has already been implemented in the northeastern state of Assam, where 1.9 million people – most of them Muslims – have been declared stateless and without rights. The BJP government is currently building a network of detention centers, not unlike those on the U.S./Mexico border, to house the new population of “illegal immigrants.”

While eliciting stiff resistance from many, the government’s Hindu supremacist policies are very popular with the country’s majority. Modi retains high approval ratings and last year won a resounding election landslide. And it is impossible to travel throughout the country without seeing orange and green BJP flags flying in every town and village.

Tomorrow Trump expects to close a deal that would see India buying over $3 billion in U.S. weaponry. “As we continue to build our defense cooperation, the United States looks forward to providing India with some of the best and most feared military equipment on the planet,” he said. The president also hopes to sign an extensive general trade agreement; “We will be making very, very major, among the biggest ever made, trade deals. We are in the early stages of discussion for an incredible trade agreement to reduce barriers of investment between the United States and India,” he added.

0 thoughts on “Violent Protests As Trump Arrives In India, Negotiates $3B Arms Deal With Modi”