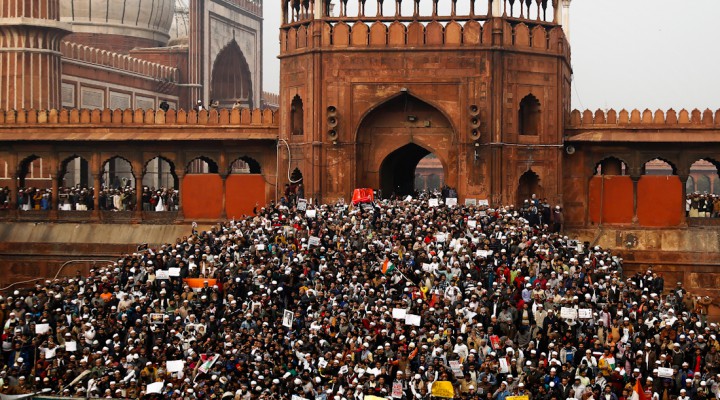 At least 25 people have been killed in the protests and India’s far-right government has banned gatherings in cities across the country.

MPN– Millions of Indians have defied Prime Minister Narendra Modi’s ban on protests to express their opposition to the government’s wave of anti-Muslim citizenship laws, especially the Citizenship Amendment Act (CAA) and the National Registration Council (NRC). Around 140 million Muslims live in India and many see the new steps as a fresh attempt by the far-right Hindu nationalist government to oppress and marginalize them. At least 25 people have been killed, primarily in the country’s most populous state, Uttar Pradesh (UP). The government has banned protests in the country’s capital, Delhi, UP and other states.

An OCEAN of people in Hyderabad protest against the #CAA and the Modi regime.

This must be at least 200,000 people, if not more. When will the regime, and the world, listen?
Source:@bemusedlawyer #India pic.twitter.com/0NxR9D0M80

The CAA makes it easier for people from neighboring Muslim-majority countries to apply for Indian citizenship– if they are Hindu, Christian, Buddhist, Sikh or Jain. But it explicitly rejects certain classes of people it deems as undesirable, including Muslims, transgender people, atheists and those from a low caste. The NRC demands all Indians provide extensive documentation to prove their citizenship– something hundreds of millions will surely be unable to do. It, therefore, gives Modi and his ruling Bharatiya Janata Party (BJP) authority to strip citizenship from most Indians if it wishes, making them stateless and effectively without any rights.

The NRC has already been applied to the northeastern state of Assam, and 1.9 million people– half of them Muslim– have lost their citizenship. The BJP government is also building an extensive network of “detention centers” to house the enormous, newly criminalized population.

Critics describe the laws as akin to President Trump’s Muslim ban and claim they are in violation of India’s secular constitution. Delhi has been in an uproar for a number of days, as over a dozen metro stations have been besieged, roads closed, inducing enormous traffic jams and canceled flights. The government shut down the internet and other telecommunications services in Delhi and other hotspots of discontent. Sources inside the capital tell MintPress that businesses across the city are closed, power cuts are frequent and many are staying inside their homes to avoid the violence. But despite the ban on protests, demonstrators stormed the city’s iconic Red Fort. Similarly, militant actions are occurring across the country. The BJP’s Chief Minister in UP, Yogi Adityanath, has promised to take “revenge” against those protesting against his party. Already thousands have been detained, among them the celebrated historian Ramachandra Guha, who was arrested live on camera in the southern city of Bengaluru.

The government has insisted that Muslims have nothing to fear from the new laws, that they are designed to protect citizens, and that any decision can be challenged in court. Among those who are skeptical of this claim is noted writer and political activist Arundhati Roy, who joined the protests in Delhi. “It is a shameful thing,” she said of the new laws, accusing the government of “turning India into Kashmir.” “Everybody knows that this is an existential question for this country now,” she added, claiming that the BJP had made passports and voters’ cards meaningless and that citizenship was now based on a collection of BJP-written documents. “This only happened in 1935 in Germany,” she said, claiming that the legal challenges were virtually meaningless for most people: “Which poor person can appeal in the Supreme Court?!” Earlier this year, the Indian army invaded Kashmir, a disputed territory with Pakistan, inflaming tensions and raising the possibility of a potential nuclear war between the two countries,

The CAA and the NRC are the newest examples of a strident, far-right Hindu majoritarian movement that has swept India in modern years, defeating the once-dominant Congress Party of the Gandhi and Nehru dynasties. Modi’s BJP achieved a resounding victory in the April/May elections, winning 303 of the 545 seats in the Lok Sabha, India’s lower house of parliament, quite an achievement in a multi-party system. Modi himself has maintained very high popularity levels throughout, perhaps because of his Hindu chauvinist policies, which put the 80 percent of the population that practices Hinduism first.

Modi has also cultivated a close alliance with other far-right leaders like the U.S.’ Donald Trump, Israel’s Benjamin Netanyahu, and Brazil’s Jair Bolsonaro. He was among the first world leaders to send his congratulations to Britain’s Boris Johnson after his recent election victory.

But the Western corporate media is too fixated on covering Hong Kong nonstop to carepic.twitter.com/TS8dfCT8zA

Thus, while there is stiff opposition to Modi’s anti-Muslim policies, it would be a mistake to believe that the protests represent the will of all the people. Modi is leading the subcontinent in a very particular, rightward, religious majoritarian direction with the consent, if not the enthusiastic support, of much of the population. Decades of religious and economic resentment are boiling over as Indians fight over its future. The end of 2019 could also be the end of India’s secular tradition.