HOME / Economy / This Christmas, Over Half a Million Americans Will Struggle with Homelessness 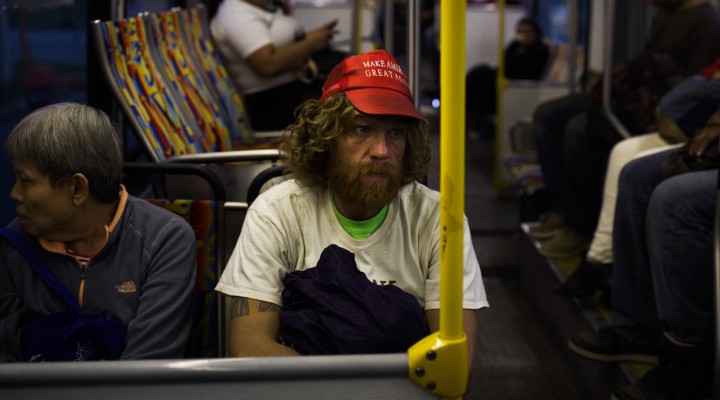 The government estimates ending homelessness would cost around $20 billion, less than Americans spend on Christmas decorations, yet there appears to be little appetite to address the growing problem.

MPN– While millions of Americans celebrate Christmas this year with loved ones, carving turkey and sharing gifts, others are not so fortunate. According to the Department of Housing and Urban Development, over half a million of us will spend Christmas on the streets. The government agency estimates that on any given day, around 553,000 Americans are homeless. A third of those are families with young children. African Americans and those with disabilities are particularly likely to become homeless.

Yet these distressing numbers are sure to be underestimates of the true problem as they do not include the many more sleeping in vehicles or other makeshift accommodation, sofa surfing or relying on friends. Around 1.5 million people sleep at a shelter annually, according to figures from the National Alliance to End Homelessness. Furthermore, the 500,000 number itself is likely an underestimate. A 2017 experiment done by The Guardian, where it placed actors posing as homeless people on the streets, found that authorities missed around one in three of them. And they were wishing to be seen, not individuals keen to go undetected.

Tens of millions of Americans are barely managing to stave off the same fate. Almost half of America is broke, and 58 percent of the country is living paycheck to paycheck, with savings of less than $1,000. 37 million Americans go to bed hungry and around 130 million admit an inability to pay for basic needs like food, housing or healthcare. After a decade of decline, the homeless population is again creeping up.

The Trump administration is believed to be readying a “get tough” approach to the problem. Singling out California, earlier this year, Trump claimed that its cities were “going to hell” thanks to illegal encampments that increase environmental pollution. The number of unsheltered homeless people in Los Angeles Country alone increased by over 10 percent this year, to 44,214.

Yet the United Nations has decried the already inhumane treatment of homeless Americans, claiming that the state “effectively criminalizes” them “for the situation in which they find themselves.” In many cities, activities like sleeping rough, panhandling or public urination (in locations with zero pubic bathrooms) have been turned into arrestable offenses, ensuring a carceral “solution” to the problem. Homeless people can be given tickets for infractions as innocuous as loitering, leading to warrants and unpayable fines, trapping them in a cycle of criminality which they cannot escape as their record prohibits them from subsequent employment and access to most housing. Thus, the UN report concludes that it is “effectively a system for keeping the poor in poverty while generating revenue” for the state to employ more police to speed the system up. Despite being a very visible representation of the economic and social dislocation in society, there currently appears to be little political appetite in Washington to solve the problem. The government estimates ending homelessness would cost around $20 billion– less than Americans spend on Christmas decorations alone. Yet there may be an even easier and cheaper way to fix the problem. Amnesty International reported that there are five times as many vacant properties in the U.S. as there are homeless people. Legislation enacted to make use of those as emergency accommodation could be enacted.

If Democrats manage to unseat Trump in 2020 there is hope that this could be the last year of mass homelessness at Christmas. Vermont Senator Bernie Sanders, for example, has made housing for all a key pillar of his campaign message. “In the richest country in the history of the world, every American must have a safe, decent, accessible, and affordable home as a fundamental right” his website declares, pledging to end homelessness, fight gentrification and protect tenants’ rights. Sanders also promises to invest $2.5 trillion into building nearly 10 million “permanently affordable housing units.” Other major candidates, like former Vice President Joe Biden and Massachusetts Senator Elizabeth Warren, have discussed measures to address the epidemic, but nothing as substantial as Sanders’. On the other hand, as Mayor of South Bend, Indiana, Pete Buttigieg conducted a relentless campaign against homeless people under his jurisdiction.

Media often treat the problem of homelessness not as a condemnation of the callous disregard for human life of modern society, but as merely a natural function of the market. For example, in one supposedly heartwarming story about a good samaritan helping the homeless during the Chicago polar vortex last winter, CBS News casually noted that 22 homeless people had already died of exposure during the cold weather.

Society does its best to hide or normalize homelessness. Or, worse still, blame them for their own predicament. But, like slavery and apartheid, it is not natural and is a consequence of a man-made system that can be changed. Americans in 2020 will have an opportunity to decide what solution they wish to see enacted. For now, though, it won’t be a very merry Christmas for those at the bottom of the economic scale.

Feature photo | Wearing a “Make America Great Again” hat, Nathanael Baisley, 38, sits in a bus in Los Angeles en route to Santa Monica Beach, where he spends the night, Oct. 28, 2017. Baisley said he has been homeless on and off for three years. Jae C. Hong | AP

Harvesting the Blood of America’s Poor: The Latest Stage of Capitalism

0 thoughts on “This Christmas, Over Half a Million Americans Will Struggle with Homelessness”