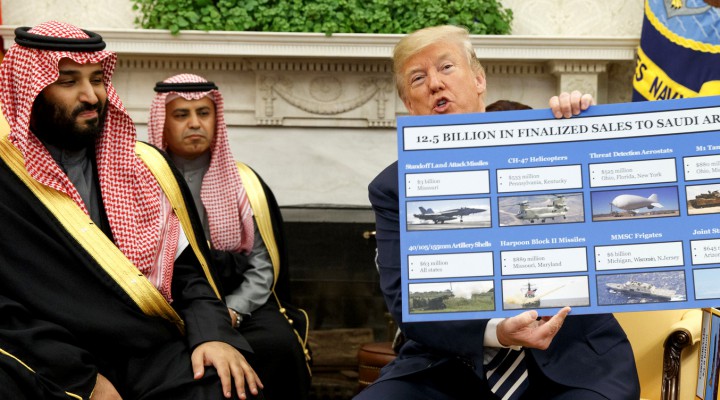 The U.S. government continues to scramble to keep its allies from buying its THAAD missile defense system’s top competitor, the Russian S-400. Unfortunately for them, it’s the U.S. taxpayers who are footing the bill.

On Monday, in an all-but-unreported news item, the Pentagon announcedthat it would be paying $946 million to Lockheed Martin toward the installation of a missile defense system that was purchased — not by the United States government — but by Saudi Arabia. In other words, the Pentagon is paying nearly $1 billion to subsidize a purchase made by a foreign power.

In its announcement, the Pentagon referred to the payment as an “undefinitized contract action” that would be used, in part, to prepare Saudi Arabia’s current missile defense system for the installation of the $15 billion Terminal High Altitude Area Defense (THAAD) system manufactured by Lockheed.

The Pentagon said the payment was intended to prevent major delays in the delivery and production of the THAAD system, suggesting it was likely a hedge against past Saudi interest in the THAAD’s main (and cheaper) competitor, the Russian-made S-400. However, the payment is also authorized for use by Lockheed to pay for materials, tools and engineering development.

The Saudi THAAD purchase was a major component of the “$110 billion” weapons deal much touted by the Trump administration in 2017. However, many of the key purchases within that massive deal were never finalized, an embarrassment for what the administration had advertised as a major foreign policy success that would create jobs in the United States, even though many Lockheed products are actually manufactured abroad.

A better deal for a better product down the block

One likely explanation for the Pentagon’s willingness to pay such a significant amount to subsidize the Saudi THAAD system is the fact that the Saudi government had intended to purchase the cheaper and more effective Russian-made S-400 instead of the THAAD. Indeed, as MintPress News reported last year, the Saudis let the deadline for the THAAD deal pass on September 30 of last year without signing, and instead expressed interest in the S-400. The Saudis also refused U.S. government requests to disavow its interest in the Russian-made system.

Just two days after the THAAD deadline passed, Saudi journalist Jamal Khashoggi disappeared. His disappearance and alleged murder caused international outrage, surprising many observers, as even the most outrage-prone U.S. politicians generally turn a blind eye to Saudi human-rights violations. Senator Lindsey Graham (R-SC), who became one of the most vocal critics of Saudi Crown Prince Mohammed bin Salman (MBS) after Khashoggi’s disappearance, is also heavily funded by Lockheed Martin, which is the largest contributor to his 2020 re-election campaign.

The furor over Khashoggi’s death — which appears to have been, in part, influenced by Saudi lack of interest in the THAAD system — eventually pressured the Saudi government enough to sign letters of offer and acceptance for their purchase of 44 THAAD launchers, missiles and related equipment in November.

However, in order to entice the Saudis to “buy American,” more than political pressure appears to have been needed and it is likely that U.S. officials offered to “sweeten the deal.” Given this context, the Pentagon’s $946 million payout to prevent installation delays appears to be one of these concessions, as the U.S. government continues to scramble to keep its allies from buying the THAAD’s top competitor, the Russian S-400. Unfortunately for them, it’s the U.S. taxpayers who are footing the bill.