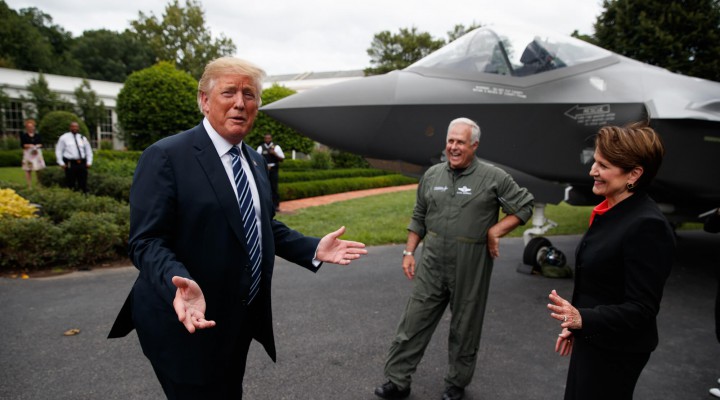 The revival of the FMF grant program is part of a wider effort by the Trump administration to push US weapon sales and persuade foreign nations to “buy American.”

The Trump administration is pushing for the creation of an $8 billion loan fund in order to boost weapons sales to foreign allies, according to a summary of the administration’s draft budget for next year, which was made public on March 11. The loan program was first pitched in the early days of the administration but failed to gain support from Congress.

While the previously suggested loan program was touted as a replacement for the Foreign Military Financing (FMF) grant program — which subsidizes arms purchases made by foreign nations, particularly Israel and Egypt, to the tune of billions of dollars — the current loan program would not replace, but instead “complement” the FMF program. While the current budget would slightly reduce the requested budget for the FMF from $5.9 billion in FY 2019 to $5.4 billion, the suggested loan program would add an additional $8 billion, bringing the total amount budgeted by the Trump administration for financing arms purchases made by foreignnations to an astounding $13.4 billion.

Notably, the “new” loan program mentioned in the budget has existed for years. However, it has been largely unused by the Trump administration and previous administrations, which have relied instead on FMF grants as a means of offering military aid to allied nations. The largest recipient of FMF assistance is Israel, which received 51 percent of the program’s funds in Fiscal Year 2018. Egypt and Jordan are the other top FMF recipients.

Another change from the Trump administration’s past effort to transform FMF into a loan program is that the current proposal would seek to grant the State Department, which manages the FMF jointly with the Department of Defense, the authority to offer certain nations “flexible interest rates” in order to offer a more “competitive” loan program.

Colby Goodman, an expert at the Forum on Arms Trade, was cited by Defense One as suggesting that “‘flexible interest rate’ means lower interest rate and ‘more competitive’ loan program means lower guarantees and protections.” “My general concern,” Goodman warned, “is this could lead to more loan defaults and taxpayers would end up footing the bill.”

The revival of the loan program appears to be the administration’s latest policy forming part of a wider effort to persuade foreign nations to “buy American” when seeking to purchase armaments. The U.S., under Trump, has made weapon sales a cornerstone of its foreign policy and has pressured and even threatened countries, including allies, who have made arms purchases from rival nations such as Russia and China.

While the administration’s prior efforts to offer loans for weapons purchases were rejected by Congress, the current measure is more likely to garner support from past skeptics. This is because the loan program — which was previously suggested as a replacement to FMF grants — will now complement the existing grant program, meaning that it will significantly increase the financial incentives that favor foreign purchases of American-made weapons.

In contrast, the previous effort to turn the FMF into a loan-only program was aimed at reducingthose financial incentives. Thus, members of Congress who had previously opposed the original proposal and are heavily funded by the arms industry, like Senator Lindsey Graham (R-SC), are likely to support the newly proposed “complementary” loan program. Indeed, as Defense One noted, the introduction of a loan program in addition to the FMF grant program has “long been a top priority for the defense industry.”