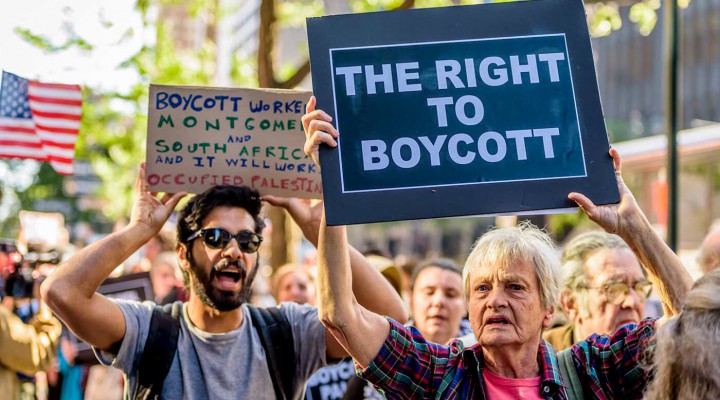 MPN- Under the guise of preventing “anti-Semitism,” this anti-BDS bill represents a fraught, Orwellian overreach by Congress into the private lives of all Americans and their right to make politically-motivated decisions.

In an evening vote that garnered essentially no national media coverage, the U.S. Senate voted last night to advance the “Strengthening America’s Security in the Middle East Act of 2019” – sometimes called the “anti-BDS bill” for its component that would allow state and local governments to punish companies or individuals who support the non-violent Boycott, Divest, Sanctions movement aimed at promoting Palestinian rights and ending Israeli apartheid and military occupation of the West Bank. The bill was, notably, numbered S.1 — the Senate’s first legislative act of its 2019-20 session.

Numerous rights groups, politicians and civil rights advocates have accused this measure of violating freedom of speech and setting a dangerous precedent for the private political activism of American citizens, all on behalf of a foreign country.

The bill was adopted by the Senate in a vote of 74 in favor to 19 against, with seven abstentions. The bill had previously been blocked by Senate Democrats by a 56-44 vote as part of their objection to acting on legislation during the government shutdown. However, many of those Democratic senators who had previously blocked the bill ultimately voted in support of the measure. In order to become law, the measure would still need to pass the Democrat-run House of Representatives. However, given the amount of support for the measure among Democrats and the power of the Israel lobby, the bill stands a considerable chance of passing the House. Some commentators have paid particular attention to how Democratic senators considered to be 2020 hopefuls voted on the bill. Several confirmed and likely contenders for the upcoming Democratic nomination voted “No” – including Senators Elizabeth Warren (D-MA), Kirsten Gillibrand (D-NY) and Bernie Sanders (I-VT). However, Cory Booker (D-NJ) and Kamala Harris (D-CA), whose private courting of the Israel lobby was the subject of a recent MintPress Newsreport, abstained from voting. Another notable abstention was Republican Senator Rand Paul (R-KY), who had previously threatened to filibuster a key component of the bill last year, preventing its passage during the previous Congress.

The bill includes several measures that were promoted by the Israel lobby last year but did not make it through the previous Congress. These include the “Ileana Ros-Lehtinen United States-Israel Security Assistance Authorization Act of 2019” which would give a record-breaking $38 billion to Israel over the next 10 years, and which ultimately failed to pass after Sen. Paul threatened a filibuster against it. That bill also requires Congress to give at least $3.8 billion to Israel every subsequent year after the initial 10 years.

Other measures in the bill include the “Caesar Syria Civilian Protection Act of 2019”  — which imposes more sanctions on Syria and has been described as a “rebuttal” to President Trump’s proposed Syria troop withdrawal, which Israel also opposes – and the “The United States-Jordan Defense Cooperation Extension Act,” which would also give money to Israel. Some analysts have long asserted that U.S. security assistance to Jordan and other regional countriessuch as Egypt is aimed at securing regional support for Israeli and American geopolitical objectives in the Middle East.

Yet, the most controversial part of the bill by far is the “Combating BDS Act of 2019,” which would authorize state and local governments to retaliate commercially against entities that support BDS, such as by halting business with or refusing to contract or hire companies or individual citizens who either actively participate in or support the movement. A previous version of the bill included possible jail time as punishment for supporting a boycott of Israel or Israeli settlements, their violation of international law notwithstanding.

Some have asserted that the current text of the bill would mean that these same retaliatory measures would apply to boycotts targeting any country considered an “ally” by the U.S. government – Saudi Arabia, for example – if that boycott was not explicitly sanctioned by Washington. Others, such as Senior Legislative Counsel to the American Civil Liberties Union (ACLU) Kathleen Ruane, have asserted that the bill “sends a message to Americans that they will be penalized if they dare to disagree with their government.” The ACLU also argued via Twitter that “states don’t have the ‘right’ to punish individuals for participating in political boycotts the government doesn’t agree with, which this bill encourages them to do.”

Such concerns over similar laws enacted at the state level led two federal courts to rule that “anti-BDS” laws were unconstitutional for their restriction on the right to free speech. However, the bill the Senate just advanced both ignores and nullifies those court rulings by attempting to shield anti-BDS legislation at the state level from future legal challenges. However, as a recent MintPress report noted, the effort to protect anti-BDS state legislation through the passage of national legislation is unlikely to work.

The fact that the Senate just voted in favor of a bill to nullify the right of American citizens to engage in political speech that is opposed by the U.S. government should be headline news across the country. However, mention of the vote has been notably absent from American mainstream news outlets Tuesday morning. One would think that left-leaning news networks, ever eager to criticize the Republican Party, would be quick to cover how the Republican-controlled Senate just voted to restrict American political speech if it deviates from the government’s own position. Yet the fact that the bill itself has several co-sponsors from the Democratic Party, and is strongly supported by the powerful Israel lobby, has apparently helped to earn their silence.

While the bill’s relation to the BDS movement – and, by extension, the Israel/Palestine conflict – makes it a polarizing and largely partisan issue, all Americans, regardless of political affiliation or their views on Israel/Palestine, should be gravely concerned about not just the bill itself but the precedent it would set should it become law. By encouraging retaliation by the State against American citizens for making decisions about what to buy and what not to buy in their private lives, a dangerous and chilling precedent has been approved by 74 U.S. Senators in order to shield a foreign country from criticism and the consequences of grassroots activism. Under the guise of preventing “anti-Semitism,” this bill represents a fraught, Orwellian overreach by Congress into the private lives of all Americans and their right to make politically-motivated decisions.