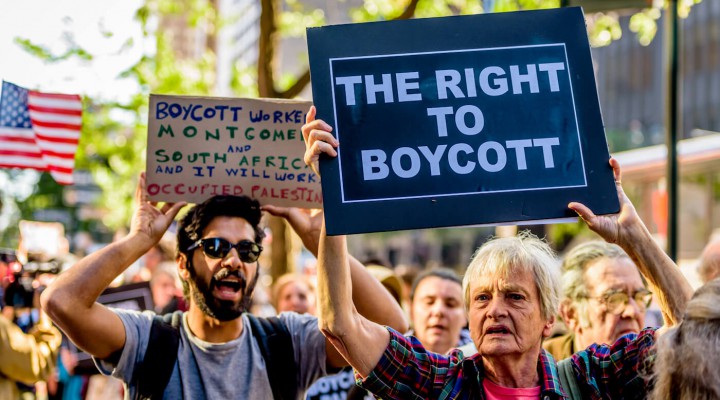 MPN- “It says quite a bit about the priorities of the new Congress when in the midst of a government shutdown, when federal workers are not receiving their paychecks, the new Congress is more concerned with curtailing the First Amendment rights of the people.” — Chip Gibbons, U.S. Constitutional Law Expert

Pro-Israel lawmakers in Washington, undeterred by the partial shutdown of the United States government, are pursuing their agenda full speed with the introduction of the first piece of legislation before the 116th Senate — a bill that aims to stifle the free-speech rights of American critics of apartheid Israel.

The Republican-controlled Senate’s first bill (S.1) would enact penalties on entities that engage in boycotts of Israel — one of many measures in the United States intended to push back on the Boycott, Divestment and Sanctions (BDS) movement.

BDS seeks to place economic pressure on companies and institutions that support Israeli ones operating in illegally occupied areas in Palestine, in order to pressure the Israeli government into compliance with international law and to cease its practices of apartheid, ethnic cleansing, and the ongoing encroachment of Israeli settlements.

Senator Bernie Sanders (D-VT), pushing back against the timing and symbolic priority being accorded to the bill, said:

It’s absurd that the first bill during the shutdown is legislation which punishes Americans who exercise their constitutional right to engage in political activity. Democrats must block consideration of any bills that don’t reopen the government. Let’s get our priorities right.”

Sanders’ condemnation of the anti-BDS bill should not be taken as signaling support for the movement. Asked about the non-violent movement in an interview with AJ+ in 2016, Sanders said: “I’m not a supporter of [BDS].”

It says quite a bit about the priorities of the new Congress when in the midst of a government shutdown, when federal workers are not receiving their paychecks, the new Congress is more concerned with curtailing the First Amendment rights of the people.”

A battle on both sides of the aisle: Tlaib and Omar step up

The Democratic-controlled House of Representatives’ first bill (H.R.1) tackles corruption, campaign finance and voting rights, underscoring the disparity between the priorities of the bodies. The Senate bill, however, has a number of Democratic backers.

This is the U.S., where boycotting is a right & part of our historical fight for freedom & equality. Maybe a refresher on our U.S. Constitution is in order, then get back to opening up our government instead of taking our rights away.”

Omar and Tlaib, both first-term representatives, were the first and second members of Congress to endorse the BDS movement.

Senator Marco Rubio (R-FL), a sponsor of S.1 — which, again, seeks to punish American citizens for engaging in First Amendment-protected activity in order to protect the image of a foreign government — fired back at Tlaib, accusing her of anti-Semitism. “This ‘dual loyalty’ canard is a typical anti-Semitic line,” said the senator. Rubio was likely referring to Tlaib’s comment that the bill’s backers “forgot what country they represent.” He went on to mention Israel three times in the tweet, but did not devote any words to his American constituents.

They forgot what country they represent. This is the U.S. where boycotting is a right & part of our historical fight for freedom & equality. Maybe a refresher on our U.S. Constitution is in order, then get back to opening up our government instead of taking our rights away. https://twitter.com/SenSanders/status/1082013021214597120 …

6,377 people are talking about this

Not so fast, argues Gibbons, who told MintPress:

What anti-BDS laws seek to do is punish people for engaging in political speech by denying them a public benefit. The Supreme Court has for decades upheld that a public benefit cannot be denied based on First Amendment-protected speech.”

In other words, it’s not constitutional for a state to “boycott” companies that boycott Israel.

States don’t have the ‘right’ to punish individuals for participating in political boycotts the government doesn’t agree with, which this bill encourages them to do. First Amendment rights belong to the people, Marco Rubio — not the government.”

States don’t have the “right” to punish individuals for participating in political boycotts the government doesn’t agree with, which this bill encourages them to do.

This is a lie.

My bill doesn’t punish any political activity. It protects the right of local & state govts that decide to no longer do business with those who boycott #Israel.

So boycotting #Israel is a constitutional right,but boycotting those participating in #BDS isn’t? https://twitter.com/SenSanders/status/1082013021214597120 …

1,520 people are talking about this

The S.1 bill is a repeat of one known as S.170, weighed by the last Congress, and would give state and local governments legal authority to engage in such retaliatory boycotts. The aim of S.170 was “to provide for non-preemption of measures by state and local governments to divest from entities that engage in commerce-related or investment- related boycott, divestment, or sanctions activities targeting Israel, and for other purposes.”

Various anti-BDS bills exist in more than half of all U.S. states (26), while an additional 13 states are weighing anti-BDS legislation.

According to Gibbons, however, preemption doctrine was not the principal basis for a successful legal challenge to anti-BDS state laws. “The two federal courts that blocked anti-BDS laws from being enforced did so on First Amendment grounds, not on the grounds that the state’s actions were preempted by Congress,” Gibbons said.

Those legal challenges revolved respectively around the claims of a lawyer for prisoners who worked for the state until his contract was withdrawn over his refusal to sign a pledge not to boycott Israel and a public school curriculum developer and teacher who followed her church’s decision to boycott goods from the illegally occupied West Bank.

So — while S.1 would do nothing to safeguard anti-BDS legislation from legal challenges based on the First Amendment, which have been lodged already — Gibbons said:

This bill will have a chilling effect as it sends a message to states that Congress thinks it is okay to try to suppress a particular social movement. Many states may see this as a green light to engage in such actions. But it doesn’t make state actions suddenly constitutional.”

Previous anti-BDS laws were even more harsh, however. One introduced by Senator Ben Cardin (D-MD) last year — which was on track to pass but saw its backers quickly walk away amid massive public outcry — would have criminalized BDS activity.

The Intercept reports that Rubio’s S.1 bill has seven Democratic co-sponsors, enough votes for it to reach the 60-vote threshold to block its opposition from filibustering. It would still need to pass the House of Representatives and be signed by President Trump to become law.