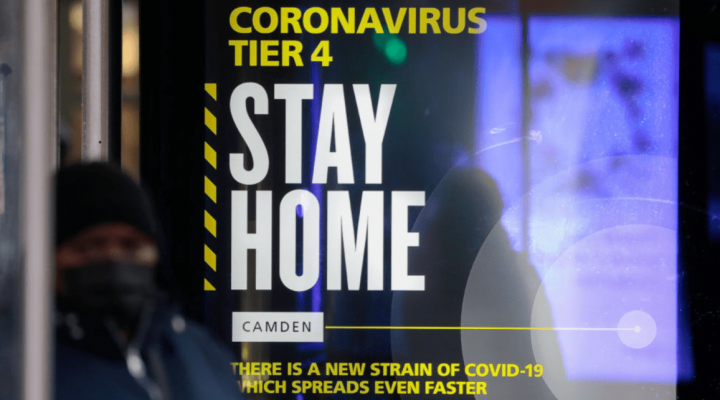 The source behind the claim that a new COVID-19 strain in the UK is 70% more transmissible, Dr. Erik Volz of Imperial College, admits that the model that produced that statistic is flawed and that it is “too early to tell” if the strain is more easily spread.

On Saturday, UK Prime Minister Boris Johnson announced extreme new measures just before the holidays due to the emergence of a new COVID-19 variant. Per Johnson, as well as the UK’s Chief Medical Officer Chris Whitty who also spoke at Saturday’s press conference, the new strain – nicknamed VUI-202012/01 – is around 70% more transmissible, but no evidence shows it to be any more severe or deadly than previous strains.

According to the BBC, Johnson’s assertion that the new variant “may be up to 70% more transmissible,” was based on the information discussed the day prior by the UK government’s New and Emerging Respiratory Virus Threats Advisory Group, or NERVTAG. Yet, as the BBC notes, this figure apparently comes from a single source, a 10 minute presentation delivered by Dr. Erik Volz of Imperial College given last Friday, the same day as the NERVTAG meeting.

Volz – a close colleague of the discredited Neil Ferguson – delivered the presentation to COVID-19 Genomics UK (COG-UK), a research consortium largely funded by the UK government and the Wellcome Trust and, in particular, the Wellcome Sanger Institute. The Wellcome Sanger Institute recently came under fire for “misusing” the DNA of Africans to develop a “gene chip without proper legal agreements” and an upcoming Unlimited Hangout report will detail the ties of the Wellcome Trust to the UK eugenics movement, the Bill and Melinda Gates Foundation and the Oxford-AstraZeneca COVID-19 vaccine. Notably, the Wellcome-funded scientist behind that vaccine candidate, Adrian Hill, was recently quoted by the Washington Post as saying that “We’re in the bizarre position of wanting COVID to stay, at least for a little while…But cases are declining.” The UK government, Google and other powerful stakeholders are positioned to profit from sales of that particular vaccine candidate.

According to Volz’s most recent publication, COG-UK “has resulted in the generation of >40,000 SARS-CoV-2 sequences from the country in <6 months (approximately half of all genomes sequenced globally as of 7 July)” and “has facilitated the usage of robust and systematic sampling and shared bioinformatic and laboratory approaches and the collection of consistent core metadata, resulting in a large, high-resolution dataset capable of examining changes in virus biology in the United Kingdom.”

However, in his presentation last Friday, Volz repeatedly downplays the quality of COG-UK’s sampling and, by extension, the validity of the model used to justify the 70% figure, raising obvious questions as to why Boris Johnson would cite the figure so prominently and use it to justify draconian lockdown measures during the holiday season as well as the arbitrary creation of a new, more extreme lockdown tier.

In comparing the new strain, which Volz refers to in the presentation as N501Y, to another strain named A222V, Volz states that “We’re still basically in the very early stages, we basically have one month of growth for comparison, whereas we have now observed A222V for 3 months.” After noting the limited nature of the dataset for N501Y, Volz stated that “the growth [in cases for the new strain] does appear to be larger.” He then quickly adds the caveat that “trends you see early on don’t always pan out, you need to let more data accumulate.”

Volz then goes on to compare the transmissibility of A222V and N501Y. Regarding the model used to determine A222V’s transmissibility, Volz states that “model fit is not particularly good” given that “there are lots of outliers early on and there are lots of outliers quite late.” He concludes that “we wouldn’t expect that a logistical growth model is necessarily appropriate in this case.” However, he uses this “not necessarily appropriate” model of a poor fit to compare to the new strain.

Yet, even with the model for the new strain’s transmissibility, Volz states that it’s “too early to tell” what N501Y’s transmissibility even is, stating that the 70% figure estimated by the model is based on “the current state of our knowledge,” which again is based on 1 month of data and its trends, trends that Volz also noted “don’t always pan out.” Volz then adds that the sparse datasets used to develop the transmissibility model for the new strain had some issues, stating that “the sample frequency is very noisy and overdispersed.” Later on in the presentation, Volz states that the data, provided by COG-UK, was both “non-random and very noisy sampling,” bringing into question not only the limited amount of data in terms of time, but also the quality of that data. After noting the glaring flaws in both models he is comparing, and that it is “too early to tell” much of anything about N501Y, Volz states that N501Y is “growing faster than A222V ever grew.”

Volz’s presentation follows his release, alongside Imperial College professor and NERVTAG member Wendy Barclay, of the preliminary genomic characterization of the new strain. Volz’s presentation last Friday and this preliminary characterization, first published on December 19, were the main sources of data considered at the NERVTAG meeting. Notably, the study, written for the UK government and Wellcome Trust-funded COG-UK, has yet to be peer-reviewed and makes no mention of increased transmissibility or the 70% figure.

Volz’s colleague, Neil Ferguson, also played a key role in promoting the need for more restrictive lockdowns due to this new genetic variant. Ferguson was caught in May breaking the rules of previous lockdowns he had heavily promoted and arguably orchestrated in order to visit his lover. He has also previously attracted heavy criticism for a history of producing flawed models, particularly his wildly inaccurate predictions regarding the anticipated COVID-19 death toll that were largely used to justify earlier lockdowns in the UK. Despite his relatively recent fall from grace, Ferguson remains part of NERVTAG and was also part of last Friday’s meeting to discuss the new strain. That meeting was said to “have played a pivotal role in changing the Prime Minister’s mind – and led to Saturday’s announcement that Christmas was effectively canceled for millions.”

However, much like Volz’s tone within his presentation, the NERVTAG meeting did not authoritatively agree on the 70% transmissibility rate. Instead, a majority of the body’s members opposed any sort of “immediate action over the new mutation” and had wanted “to wait for more evidence.” The minutes of the meeting, as cited by the Daily Mail, noted that NERVTAG had only “moderate confidence” that the new strain was more transmissible and had concluded that there was “currently insufficient data to answer crucial questions on the new strain,” including its alleged increased transmissibility. Compounding the issue was also the fact that, as noted by NERVTAG’s meeting minutes, the new strain “can be challenging to sequence,” meaning that it is not easily identified relative to other strains.

Notably, while most NERVTAG members opposed the sort of “immediate action” that Johnson announced following their meeting, Ferguson appeared on the BBC the day of the NERVTAG meeting and claimed that the UK needed to go into a third lockdown more restrictive than any previous lockdown. Ferguson appears to be a key member of the “vocal minority which believes that… we should be panicking much more frequently” that a senior Whitehall source cited as “bullying” the UK government into taking more extreme actions in recent days in a recent conversation with the Daily Mail.

In the few days since the measures were announced, Ferguson has become the main source for claims that the new variant “has a higher propensity to infect children,” though he has also stated that “we haven’t established any sort of causality on that, but we can see it in the data.” However, he also notes that “we will need to gather more data” to actually determine if children are more easily infected by the new strain. Another NERVTAG member and also a professor from Imperial College, Wendy Barclay, also repeated the unproven claim that the new variant increasingly infects children, stating that “children are, perhaps, equally susceptible to this virus as adults.” Barclay’s laboratory at the Imperial College is funded by the UK government and the Wellcome Trust.

Despite Ferguson’s admission that there is no actual evidence to back up that claim, mainstream media headlines in the UK like “UK coronavirus variant may be more able to infect children – scientists” and others implied the statement was based on more than just speculation from incomplete, biased datasets. The over-hyped concern about children being reportedly more susceptible to the new variant could be used to justify increased vaccination of that demographic, which has been shown to be largely unaffected by previous COVID-19 strains relative to other age groups.

The lack of legitimate consensus from NERVTAG and related institutions like Imperial College on the new strain’s transmissibility has weakened Johnson’s claims that crippling Christmas lockdowns are necessary as well as his justifications for the further new restrictive lockdown measures, so much so that it has even drawn criticism from mainstream media sources outside of the UK, such as ABC News.

Despite the dubious justification for the lockdowns being glaring enough to be noted by the mainstream, the UK government is reportedly now “monitoring social media for conspiracy theorists” after government surveillance of social media reactions following Saturday’s press conference revealed that “many are unconcerned by the new variant” with some being “more skeptical” and noting the “concurrence of a new variant with the approval of a vaccine was suspicious timing.”

Media reports on the UK government’s monitoring for “misinformation” regarding the new strain stated that “the conspiracies come despite the UK government’s New and Emerging Respiratory Virus Threats Advisory Group (NERVTAG) outlining the potential severity of the new variant.” Those reports failed to note that the NERVTAG minutes revealed a lack of consensus for the new lockdown and a lack of confidence the increased transmissibility of the new strain. Per this narrative, outlets like ABC News and even the majority of NERVTAG members who did not feel there was enough evidence to justify the claims of the new strain’s transmissibility, could be deemed “conspiracy theorists.”

The narrative surrounding the new strain and the affiliated lockdowns provides a clear example of how easily “expert opinion” can be manipulated to support a particular policy in the absence of any legitimate justification. The actual consensus of the NERVTAG meeting as well as the experts quoted by mainstream media outlets that dissent from those of the “vocal minority”, represented by Neil Ferguson and Wendy Barclay, have been largely ignored in UK mainstream media reports and the UK government itself, presumably because citing such inconvenient facts would delegitimize the resulting policy. Instead, those who dissent from the clearly questionable narrative are being quickly labeled “conspiracy theorists” by the UK government, a move that will likely result in an expansion of the UK’s already declared war against independent reporting and social media posts that dare to question and/or challenge the government’s favored narrative.