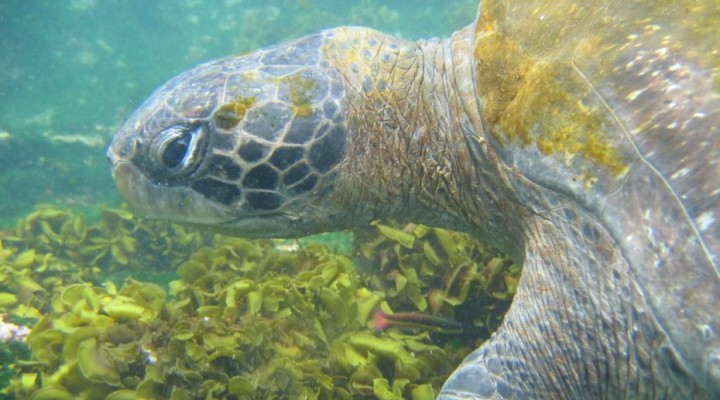 The ecologically-sensitive Galapagos Islands, home to many species not found anywhere else in the world and made famous by scientist Charles Darwin in his seminal work on evolution, “On the Origin of Species,” will soon be the location of yet another US military base.

The ecologically-sensitive Galapagos Islands, home to many species not found anywhere else in the world and made famous by scientist Charles Darwin in his seminal work on evolution, “On the Origin of Species,” will soon be the location of yet another US military base. Under Donald Trump, the Pentagon is expanding its network of overseas bases to include some of the world’s most pristine regions. Based on prior actions, a US military presence leaves a permanent footprint of hazardous materials, plain garbage, and petroleum and its by-products in and around air and naval bases.

The Galapagos, located 563 miles west of South America, is governed as a territory of Ecuador. The decision by Ecuadorian Defense Minister Oswaldo Jarrín to allow the US military to use the island of San Cristobal as an airbase was met with protests across Ecuador and around the world. Jarrín also had the temerity to describe the environmentally-sensitive islands as a “natural aircraft carrier.”

The Trump administration insists that the Galapagos base was to inly be used for combatting drug trafficking. This excuse was echoed by Ecuadorian President Lenin Moreno and Foreign Minister José Valencia. Ever since coming to power, Moreno has steered Ecuador away from its one-time role as a member of the socialist Latin American bloc, along with Venezuela, Brazil, Bolivia, and Argentina, standing firm against US imperialism in the region. However, Moreno has shown that merely because his father named him in honor of Vladimir Lenin, the founder of the Soviet Union, he can be as much a lackey for US military expansion as Latin America’s other far-right leaders, including Presidents Ivan Duque of Colombia and Jair Bolsonaro of Brazil.

The Moreno government’s insistence that the American base on the Galapagos is merely for counter-narcotics trafficking operation is laughable on its face. Former President Rafael Correa, now in exile in Europe and facing an extradition request from the Moreno regime, knows a thing or two about US bases in Ecuador. In 2008, Correa, for whom Moreno served as vice president, ordered the US Air Force to vacate its base at Manta, on Ecuador’s Pacific coast. Far from being engaged solely in counter-narcotics activity, Correa discovered that Manta was being used by the American military to assist Colombia in cross-border raids into Ecuador that targeted the leftist Revolutionary Armed Forces of Colombia (FARC). Correa also amended Ecuador’s constitution and banned all foreign military bases from Ecuadorian soil. Currently, Article 5 of the constitution states the “establishment of foreign military bases or foreign facilities for military purposes shall not be allowed.”

Moreno wasted no time in changing Ecuador’s foreign policy to act in lockstep with Washington. A June 2018 visit to Ecuador by US Vice President Mike Pence resulted in the Trump administration agreeing to supply Ecuador with weapons, radar systems, combat helicopters military training, and intelligence. At the same time, Moreno apparently agreed that in return for handing over to British authorities WikiLeaks founder Julian Assange from asylum protection in the Ecuadorian embassy in London and refusing to cooperate with US Justice Department Special Counsel Robert Mueller in his investigation of a link between Moreno and Trump 2016 campaign manager Paul Manafort, he would receive US military hardware. The granting of the US of the Galapagos as a base was icing on the cake for Washington.

From exile in Belgium, Correa tweeted his reaction to the Galapagos being used as an American base: “Galápagos is NOT an ‘aircraft carrier’ for gringo use. It is an Ecuadorian province, world heritage site, homeland.”

As much as the Ecuadorian government denied that the Galapagos base would harm the environmental condition of the islands, the Galapagos governor admitted that the new US base involved the extension of the runway of San Cristobal airport in order to handle at least two US military aircraft, a Boeing 777 and a Lockheed P-3 Orion. Jarrín was also forced to admit to the Ecuadorian Congress that, in addition to being used as a counter-narcotics base, the Galapagos would be used by the US for “emergency situations.” The new US base will come under the command of the United States Southern Command in Miami.

The US also has its eyes set on another military outpost in a world heritage site, the strategic island of Socotra in the Gulf of Aden. Some 40 percent of the plant species on Socotra are not found anywhere else in the world. Socotra is currently a territory of Yemen. However, Yemen’s Saudi-backed president, Abd Rabbuh Mansur Hadi, has offered the United Arab Emirates government in Abu Dhabi a 99-year lease on Socotra in return for the UAE’s support in the civil war between Hadi and his Saudi allies to wrest control of north Yemen from Iranian-backed Houthi rebels who control the Yemeni capital of Sana’a.

The proposed lease of Socotra to the UAE, a US ally, sounds suspiciously similar to the 99-year lease the US arranged with Cuba for the use of Guantanamo Bay as a naval base. Although the Guantanamo lease expired in 1999, the US not only continued to occupy the base but turned it into a concentration camp for Muslim detainees in the wake of 9/11.

The US Navy, which presumably would play a major role in operating a Socotra base sub-leased by the UAE to the United States, has left a trail environmentally-destructive waste dumps in every remote location it has occupied, from Keflavik, Iceland and Adak, Alaska to Diego Garcia in the Indian Ocean and Midway Island in the Pacific.

Another tropical group of atolls where the US Air Force is reportedly building a drone base is the Australian territory of the Cocos (Keeling) Islands in the Indian Ocean. The US currently uses Cocos as a halfway stopover for military flights between Diego Garcia and Guam. There are plans afoot to expand the small military installation and the runaway to accommodate US P-8A Poseidon maritime surveillance aircraft, in addition to drones. The Pentagon has also been looking at another Australian territory in the Indian Ocean, Christmas Island, as a naval installation.

The environmental damage record for islands where the United States has established bases is a long one. Just some of the US military’s contaminants left on islands like Vieques, off Puerto Rico; Terceira in the Azores; Ascension Island in the South Atlantic; and Greenland include lethal cocktails of polyfluoroalkyl substances (PFAS), Polychlorinated biphenyls (PCBs); toxic metals, and chlorinated chemicals.

The US military’s piggish record of poisoning groundwater, soil and sediments, plants, and terrestrial or aquatic animals around the world should serve as a stark warning to environmentalists responsible for protecting the rare tortoises, shore and sea birds, iguanas, bats, sea lions, and other species, as well as the flora of the Galapagos. The Pentagon does not place any priority on protection of wildlife. In fact, the only applicable directives of the US Department of Defense concerning animal protection deal with the humane treatment of animals used for military research, wildlife on military installations, and the use of certain species, like marine mammals, for combat missions. Protests about the US Navy’s use of sonar that harms whales, dolphins, and other marine mammals have been met with haughty dismissals by the Pentagon. That serves a enough proof that the Pentagon cannot be trusted anywhere near the eco-systems of the Galapagos, Socotra, the Cocos Islands, or any other environmentally-sensitive locations.