HOME / WORLD / The Danger of Quirky Cults and Politics 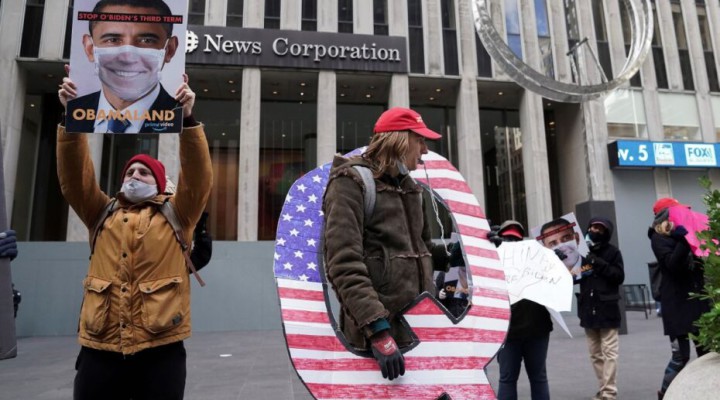 The forces of democracy should be on vigilant guard against dangerous far-right cults and political movements today as much as they were during World War II.

The Donald Trump administration opened the door for quirky and crazy cults to dominate political discourse in the United States. Never before in the history of the United States has a political movement combined a cult of personality – that surrounding Trump – with a crackpot political conspiracy – “Qanon” – and fundamentalist “prosperity gospel” Christianity, the latter best described as the unauthorized use of Jesus’s name by a gang of money-grifting charlatans. This toxic brew has been used as a convenient vehicle for right-wing politicians to build a base of donors and supporters. The truly dangerous nature of the Trump political movement, which nested in the Republican Party to the point that Trumpists now control the party of Abraham Lincoln and Dwight Eisenhower, was demonstrated in the January 6 takeover by Trump supporters of the U.S. Capitol building.

Today, alarming numbers of Americans believe in the most outlandish of conspiracy theories, including those that undermine the American political system, including its electoral process. This is not only an American problem. The political cults nurtured under the Trump administration are being exported to other countries, including Brazil, Germany, Canada, Australia, Japan, and others, where they are not only being embraced by rank-and-file citizens but by political leaders of the far-right.

With the Republican Party now fully under the control of Trump and his base of Trump cult members and Qanon conspiracy cultists, the International Republican Institute (IRI), the Republican arm of the National Endowment for Democracy (NED), is positioned to spread far-right conspiracy-laden propaganda in countries where it maintains a presence. Coupled with Trump fanatics who burrowed their way into the Department of State and the Broadcasting Board of Governors entities – Voice of America, Radio Free Europe/Liberty, Radio Free Asia, Radio and Television Marti, Alhurra, and Radio Sawa – control of the IRI provides a mechanism for Trump and Qanon conspiracists to spread their neo-fascist and neo-Nazi venom to foreign political parties and media outlets.

The international repercussions of Trumpism as a fascist political ideology are being felt in Latin America, where Eduardo Bolsonaro, the son of Brazil’s Adolf Hitler- and Benito Mussolini-admiring president, Jair Bolsonaro, serves as a linchpin in Trump political adviser Steve Bannon’s global “Fascist International,” known as “The Movement.” Eduardo Bolsonaro was placed at a meeting of a Trump “War Council,” which included leaders of the Qanon conspiracy, in the Trump International Hotel in Washington, DC on the evening of January 5 of this year, the eve of the armed and violent attack by Trump supporters on the U.S. Congress. This represents the type of internationalization of the fascist movement not seen since Hitler’s “Deutsches Ausland-Institut” in Stuttgart recruited the far-right in other nations to organize their own Nazi political organizations and parties. Authorities in the United States and Brazil must be on guard against efforts by the IRI and its parent organization, NED, to provide material support to the Bolsonaro family’s new far-right political contrivance in Brazil, the Alliance for Brazil (ALIANÇA). Just as the entire Trump family, including his offspring, Donald Trump, Jr., Eric Trump, Ivanka Trump, and Tiffany Trump, have laid claim to the stewardship of the U.S. Republican Party, Bolsonaro’s sons, Federal Senator Flavio Bolsonaro, Rio de Janeiro councilor Carlos Bolsonaro, and Sao Paulo Chamber Deputy Eduardo Bolsonaro, along with their father, control ALIANÇA. And, just as ominously, Eduardo Bolsonaro currently serves as the chairman of the Brazilian Congress’ Foreign Affairs Committee.

The combination of far-right cultism and nepotism have had a damaging effect on the democratic systems of the United States and Brazil, especially considering that the bases of political support for Trump and Bolsonaro in their respective nations are found in the cultist Christian fundamentalist sects, from where Qanon and related conspiracy theories are generated and propagated, including those related to the coronavirus pandemic. Bolsonaro ally and Brazilian Foreign Minister Ernesto Araujo has falsely called coronavirus a plot by “Communists,” referring to the virus as the “comunavirus.” He has similarly described global climate change as a “Communist plot” designed by the government of China. Araujo and the Bolsonaros have also falsely re-written history to claim that Nazism was a “leftist” movement and Adolf Hitler was a “socialist.” Those sorts of conspiracy theories are also predominant in the Trump Republican Party, where two Chinese conspiracy cults, Falun Gong and exiled Chinese billionaire Guo Wengui’s “Himalaya Supervisory Organization,” constantly traffic in conspiracies about Chinese development of Covid-19 as a biological super-weapon, fanatical tripe that is gladly spread by Qanon and other far-right conspiracy outlets.

It is noteworthy that Araujo’s father was the notorious Henrique Fonseca de Araújo, the Attorney General for Brazil’s right-wing military dictatorship, who personally interceded to prevent the extradition to Germany of Gustav Franz Wagner, the deputy commander of the Sobibór extermination camp in Nazi-occupied Poland. As part of the Nazis’ Operation Reinhard, as many as 250,000 men, women, and children were murdered by the Nazis at Sobibór, the fourth deadliest of Nazi concentration camps in terms of mass exterminations.

The question that should be put to these organizations is a simple one. Do they stand for democracy or will they continue to partner with an operational arm of the Republican Party, which now stands for fascism, white supremacy, and misogyny? That should not be a hard question to answer, even for NGOs that appear to be nothing more than Central Intelligence Agency fronts.

The forces of democracy should be on vigilant guard against dangerous far-right cults and political movements today as much as they were during World War II. After witnessing neo-Nazis and white supremacists laying siege to the U.S. Capitol, various U.S. state capitol buildings, and almost seizing control of the German Reichstag in Berlin last summer, it is clear that the unconditional surrender of Nazi Germany on May 7, 1945 was not actually a surrender but a cease fire. The Nazis have returned only this time they have penetrated the very halls of democratic political power in the United States and Brazil and are attempting to do the same in Germany, France, Britain, Canada, Australia, Italy, and other nations.

0 thoughts on “The Danger of Quirky Cults and Politics”