HOME / WORLD / Terrorism: A Menace From the Right-Wing and Allied Fundamentalists

Terrorism: A Menace From the Right-Wing and Allied Fundamentalists 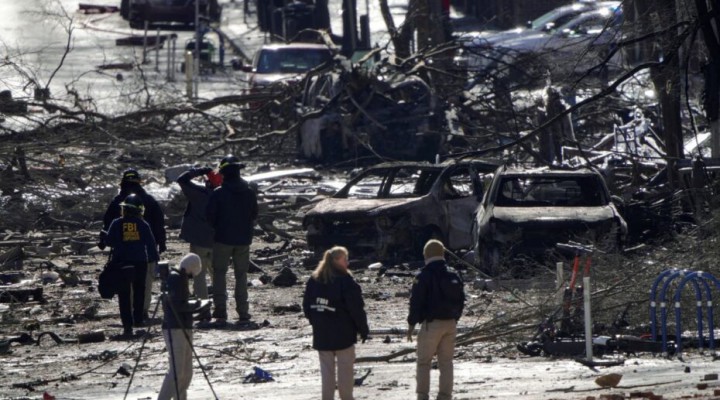 Financiers of the extreme right, including hedge fund tycoon Robert Mercer and his daughter, Rebekah Mercer, as well as Trump adviser Steve Bannon, should have their activities and finances thoroughly investigated.

On early Christmas morning a vehicle bomb exploded in downtown Nashville, Tennessee. The target was the AT&T metropolitan area network hub “Batman” building, a 33-story structure – the tallest building in Tennessee – which resembles the fictional cape crusader’s cowl. The bomber turned out to be a 63-year-old white man. Anthony Quinn Warren, who blew himself up in the terrorist attack, apparently subscribed to the babble from the pro-Donald Trump “Qanon” group of far-right conspiracy advocates who believe that Fifth Generation (5G) wireless communications networks are linked to both the Covid pandemic and electronic surveillance.

Warren broadcast an evacuation message to residents of the downtown Nashville neighborhood prior to his detonating the bomb. After the explosion, police arrested another Tennessee man who broadcasted a similar message from his truck while driving on a highway in Lebanon, Tennessee. It turned out that there was no bomb in the truck. A third incident in Leavenworth, Washington involved a bomb threat to the 911 emergency number. The claim, that there was a bomb in a garbage can on a downtown street, prompted a major evacuation of the town.

Such bombings and threats of bombings encompass the “accelerationist” doctrine of far-right Trump supporters who believe such attacks will hasten a civil war in the United States and the overthrow of the government. The same belief system prompted a conspiracy by a pro-Trump group of armed terrorists to kidnap Democratic Governor Gretchen Whitmer of Michigan, seize control of the Michigan state legislature in Lansing, and execute legislators and state police officers, in addition to Whitmer. Similar plots were uncovered by right-wing groups targeting the Democratic governors of Virginia, Kentucky, Oregon, Nevada, Maine, New York, Minnesota, Pennsylvania, New Mexico, Illinois, Wisconsin, and North Carolina and the Republican governor of Ohio.

Law enforcement investigators believe that Warren was part of a clandestine far-right group that has been targeting 5G infrastructure targets across Tennessee and the nation. These have included several cell towers that were damaged by arson in Memphis, Tennessee in December 2019. The anti-5G activists have found a ready-made audience with other right-wing groups across the United States, including racially and ethnically motivated violent extremists (REMVEs), anti-government militias, and “sovereign citizen” lone wolves.

Trump and his supporters have managed to draw the public’s and media’s attention away from the far-right’s terrorist activities by conjuring up a fictional strawman – “antifa” or anti-fascism. Far from being an actual group, antifa is a political philosophy centering on opposition to fascism and all of its offshoots, from Nazism to Trumpism.

Just as Adolf Hitler and his Nazis convinced the German people that “Communists” were behind the 1933 arson attack on the Reichstag – the actual culprits were the Nazis, themselves – Trump and his followers believe that antifa forces are carrying out arson and looting in American cities. In fact, the actual perpetrators of violent attacks are the far-right: Patriot Prayer, Proud Boys, Wolverine Watchmen, Boogaloo Bois, Three Percenters, etc. The far-right or their religious fundamentalist counterparts have been behind almost every major terrorist attack in the United States since 1975. On December 29, of that year, a powerful bomb exploded in the TWA baggage claim area of LaGuardia Airport in New York. Eleven people were killed and 75 injured.

The LaGuardia bombing has never been officially solved. However, suspicion surrounds a far-right Croatian independence group linked to the Ustaša – Croatian Revolutionary Movement – as the perpetrators. The Ustaša ruled Croatia as a Nazi puppet state during World War II.

Nine months after the LaGuardia bombing, a Croatian couple was convicted of planting a bomb in New York’s Grand Central Station. The terrorist attack, which killed a New York Police bomb squad defusing specialist, resembled the LaGuardia bombing as baggage lockers were used in both incidents. The Grand Central incident coincided with the simultaneous hijacking by Croatians of TWA Flight 355, shortly after it departed LaGuardia. The FBI considered Croatian right-wing terrorists among the most dangerous of the era and Yugoslavian President Josip Broz Tito considered the Croatian extremists as a “threat to the [Yugoslav] regime and to the survival of the federal state.”

The targeting of airlines was a signature neo-Ustaša ploy. The group had targeted JAT Yugoslav planes, including JAT Flight 367, which exploded over Czechoslovakia in 1972 while en route from Stockholm to Belgrade. The LaGuardia bombing was initially blamed on the Palestinians and a left-wing Puerto Rican group because then, like now, the right-wing wanted desperately to blame any terrorist attack on the left. As with the Islamist fundamentalist right-wing “Al Qaeda,” there were links between the Ustaša and the Central Intelligence Agency, which is likely why Croatia has never been officially linked to the LaGuardia bombing.

The confluence of anti-5G and anti-vaccination modern-day Luddites and the far-right is seen in groups like the neo-Nazi “Vorherrschaft Division,” Germany “Forke und Schaufel” (FaS), California’s Freedom Angels 2.0, and Wisconsinites Against Excessive Quarantine.

The unholy alliance of far-right and fundamentalist religious groups – be they Islamic, Christian or Jewish – has resulted in democracy coming under siege. Right-wing militia groups have occupied state legislatures in Michigan, Washington state, and Oregon. Political leaders from governors to members of the U.S. Congress and state legislators to mayors and public health officials have been threatened with physical harm.

An overwhelming majority of terrorist incidents in the past several decades have been carried out by the far-right, either directly or by false flags, and religious extremists, including Islamists taking their cues from the most far-right of regimes, the feudal monarchy of Saudi Arabia and the Likud-Orthodox government of Israel.

It is beyond clear where the threat of terrorism exists today. In October 2020, the Department of Homeland Security concluded in a report that “violent white supremacy was the most persistent and lethal threat” in the United States. A September 29, 2020 report from the FBI Field Office in Dallas that was marked FOR OFFICIAL USE ONLY/LAW ENFORCEMENT SENSITIVE stated that the Boogaloo movement was “increasing anti-government violent rhetoric and activities . . . domestic violent extremist threat in the FBI Dallas Area of Responsibility.”

Just as Hitler diverted suspicion for the Reichstag fire to fanciful “communists,” Trump employed the same tactic regarding far-right terrorism. Just prior to his electoral defeat, Trump lied when he stated, “Somebody’s got to do something about antifa and the left, because this is not a right-wing problem.” Trump’s own FBI director, Christopher Wray, countered Trump during a September 17, 2020 hearing before the House Homeland Security Committee. Wray testified: “What I can tell you is that within the domestic terrorism bucket category as a whole, racially-motivated violent extremism is, I think, the biggest bucket within that larger group, and within the racially-motivated violent extremists bucket, people subscribing to some kind of white supremacist-type ideology is certainly the biggest chunk of that.” As for antifa, Wray said it was “more of an ideology or a movement than an organization.”

It is past time for the far-right to be dealt with harshly for their repeated terror acts, from the Oklahoma City and Nashville bombings to mass shootings in El Paso, Pittsburgh, Dayton, Charleston, and Las Vegas. At the same time, far-right extremists should be summarily purged from law enforcement and the military. Financiers of the extreme right, including hedge fund tycoon Robert Mercer and his daughter, Rebekah Mercer, as well as Trump adviser Steve Bannon, should have their activities and finances thoroughly investigated. These must be a key agenda items on President Joe Biden’s “to do” list after he assumes the U.S. presidency.

Terrorism: A Menace From the Right-Wing and Allied Fundamentalists

Why the Nashville explosion is confounding terrorism experts

The Nashville Bombing vs. The Oklahoma City Bombing

0 thoughts on “Terrorism: A Menace From the Right-Wing and Allied Fundamentalists”